MIANWALI, Pakistan, May 10 2013 (IPS) - For 70-year-old Ghulam Fatima, the upcoming general elections on May 11 promise to be unlike any she has witnessed before in Pakistan. 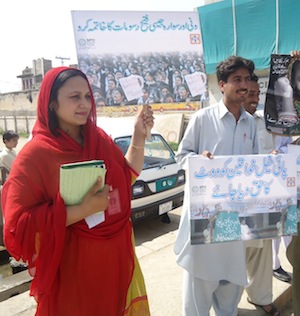 For the first time in her life she will step out of her house on Election Day and join the throng of people heading to the neighbourhood polling station in Paikhel union council, an administrative unit of Mianwali district in the northwest Punjab province, to exercise her right to vote.

Fatima and the roughly 6,000 eligible female voters in this community have been barred from the ballot box for half a century. They were disenfranchised in 1963 when tribal elders and rival castes decided that women must “respect traditional values” of tribes like the Niazi, which dominate this area.

According to Shazia Bashir, a programme specialist at the national advocacy group Strengthening Participatory Organisation (SPO), local male leaders agreed that the sight of women at polling stations was indecent, and would attract the unwelcome gaze of strangers. They also disliked the idea of women “confronting” or interacting with men at the ballot box, Bashir told IPS.

Tribal elders command a great deal of authority here. A local justice system known as “jirga” acts as a substitute for courts, and few political parties have a presence in the community.

Thus the ban remained in force until Herculean efforts by local activist groups succeeded in bringing stakeholders to the table to finally overturn the archaic law in December 2012.

Fatima says her son, who in previous election years had supported wholeheartedly her exclusion from the ballot box, has this year agreed to accompany her to the polling station, since she is completely ignorant of the voting process.

NGOs committed to bringing women into the electoral sphere are conducting practical trainings to develop basic voter literacy, but they face obstacles in the form of deep-rooted patriarchal attitudes.

The SPO’s repeated attempts to set up an adult literacy centre for women in Paikhel have been consistently thwarted since 2009 by locals determined to keep women “in their rightful place.” At most, two or three women would attend classes intended for at least 25 people.

For years, women themselves resisted attempts to reverse the ban, refusing to attend events on voter rights and preventing SPO activists from entering their homes.

Shazia says she even received death threats from some locals who wanted to maintain the status quo, but she stayed her course.

Eventually the campaign turned its attention to the men, spelling out the cost of keeping a huge section of the community out of the electoral process.

Employment here is restricted to small-scale agricultural production, menial labour and honeybee farming, bringing families an average monthly income of between 30 and 50 dollars.

Children are forced to work to supplement their parents’ income, often employed as assistant mechanics in auto repair shops or helpers in tea kiosks. Inadequate health and education facilities feed this vicious cycle.

In a bid to promote voter participation, activists urged the influential District Steering Committees (DSCs) to revive welfare centres, known as Zakat Committees, capable of doling out funds to the needy.

SPO Regional Head Salman Abid told IPS the ensuing influx of government aid “helped locals to understand the benefits of staying in the political mainstream. They started listening to us seriously.” From there, activists moved to advocating for women’s right vote as crucial to maintaining government support and financial assistance.

By Dec. 12, 2012, tribal chiefs aligned with leading political parties like the Pakistan Muslim League (PML-N), Pakistan People’s Party (PPP) and Pakistan Tehreek-e-Insaf (PTI) agreed to lift the ban on women voters, with endorsement coming directly from the descendants of those who imposed it 50 years ago.

Raza-ul-Mustafa, a tribal chief whose grandfather was instrumental in implementing the ban, announced in a meeting held in December last year that his wife would be the first to cast her vote. He is currently contesting elections on the PTI ticket.

To help publicise their efforts, local advocates erected a large board at the main junction in Paikhel, in between the central bus station and rickshaw stand, and asked male members of the community who supported women’s right to vote to sign it.

The Election Commission of Pakistan (ECP) has promised to set up women-only polling stations at a maximum distance of two kilometres away from the men’s, says Abid. It has been decided that husbands or sons will accompany their female relatives on Saturday.

Zaitoon Bibi, a middle-aged mother of two, told IPS she is “happy to go along with the change”.

“We refrained from voting as our elders decided it was against tradition; this time we will vote, as there is a unanimous decision on it,” she said simply.

But others see this as a monumental development, one that could impact other regions in Pakistan where women’s turnout at the 2008 general election, though not banned outright, was “abysmally low” according to Abid, who cited Punjabi districts like Attock, Chakwal, Sargodha and Jhang as examples of low female participation.

“The Paikhel decision is a historic one and could be an example to be followed,” he said. “If such a strong decision can be made here, why not in other places?”

Indeed, many women’s rights groups around the country have mobilised ahead of May 11 to provide protection to women voters on Election Day. Memories of 2008, when polling stations were torched to prevent women from casting their ballots, are fresh in people’s minds.

Analysts have praised the ECP for publicising the fact that “undue influence” on prospective voters is a punishable offence under the 1976 Representation of the People Act, carrying a one-year jail sentence or a fine.

Kashif Nawab, an election observer with the United Nations Development Programme (UNDP), told IPS that banning women from voting falls under this category.

Nawab’s duties include timely reporting of violations of the code of conduct issued Wednesday by the ECP. He says he witnessed religious groups attempting to convince women to remain home on May 11 during his recent visit to the Attock district in Punjab. After he recorded his observation, the district election commissioner reprimanded the groups involved.

In Paikhel, the SPO has engaged a local task force to observe and report on possible violations, and ensure that women reach polling stations in time to cast their votes.

This past week volunteers visited hundreds of households and conducted “voting exercises” with women to ensure that they understand the procedure.

Encouraging support for women voters has also come from the most unlikely place: the Pakistan Ulema Council, which issued a decree last month calling voting an “Islamic responsibility” and non-voting a sin, including for women.