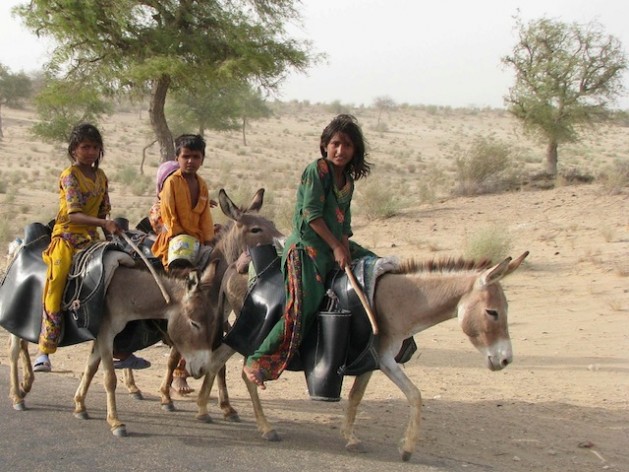 Children are bearing the brunt of the drought in Tharparkar, often the first to fall victim to diarrhoea and pneumonia brought on by malnutrition. Credit: Irfan Ahmed/IPS

MITHI, Pakistan, Jan 3 2015 (IPS) - The main entrance to the Civil Hospital in Mithi, headquarters of the Tharparkar district in Pakistan’s southern Sindh Province, is blocked by a couple of men clad in traditional dress and turbans. They are trying to console a woman who is sobbing so heavily she has to gasp for breath.

She lost her two-year-old son just moments ago and these men, both relations of hers, were the ones to carry the child into the hospital where doctors tried – and failed – to save him.

Just a couple of yards away, a team of paramedics waits for the shell-shocked family to move on. They understand that the mother is in pain, but scenes like this have become a matter of routine for them: for the last two months they have witnessed dozens of people, mostly infants, die from starvation, unable to withstand the fierce drought that continues to grip this region. 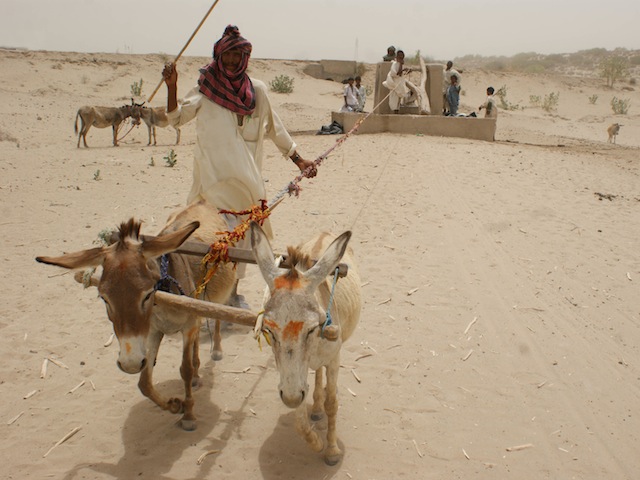 In the arid Tharparkar region, locals pull water from deep in the ground and use camels and donkeys to transport the heavy jugs. Credit: Irfan Ahmed/IPS

The death toll hit 650 at the close of 2014, but continues to rise in the New Year as scant food stocks wither away and cattle belonging to herding communities perish under the blistering sun.

Among the dead are three-week-old Ramesh; four-month-old twin girls named Resham and Razia; and the yet-unnamed sons of a couple who are inconsolable after the passing of their newborn children.

The tragedy did not unfold overnight. According to Amar Guriro, a Sindh-based journalist who has reported extensively on the region, inhabitants of this district that borders the Indian states of Rajastan and Gujarat are facing a drought for the third consecutive year.

Despite ample evidence that additional food stocks are needed between the months of July and September, typically the monsoon season, in the event of inadequate rainfall, the Pakistan People’s Party (PPP)-led Sindh government failed to develop and execute contingency plans for the vulnerable residents. 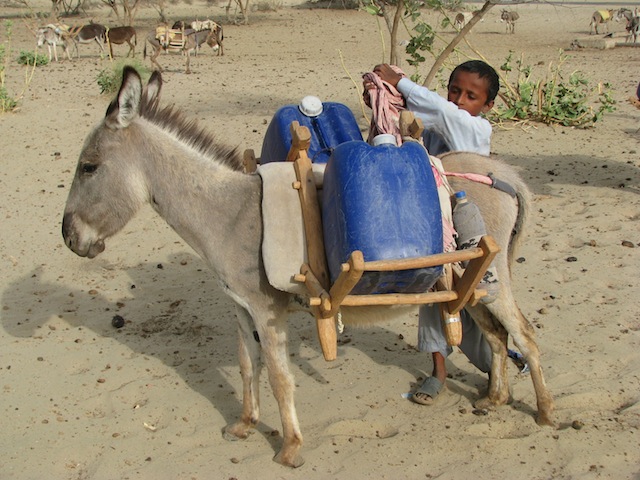 Children have to assist their families in fetching water. Education remains an elusive dream for many of them. Credit: Irfan Ahmed/IPS 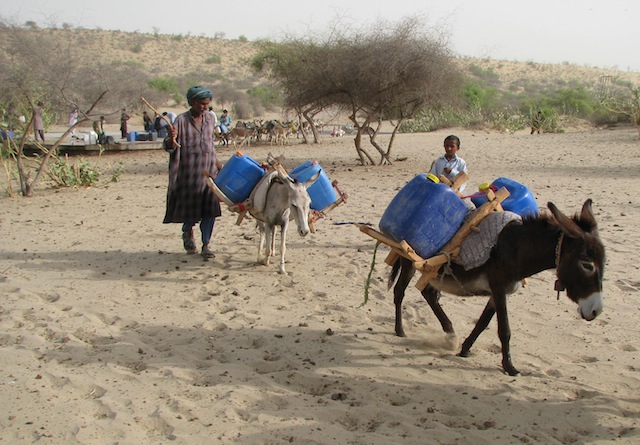 Many families travel miles across the 22,000 square-mile region in search of water. Credit: Irfan Ahmed/IPS

“The poor government response multiplied the intensity of the disaster. Underfed children are dying in large numbers, and so are the cattle, due to unavailability of fodder,” Amar told IPS.

Anything below 200-300 mm of rainfall during the monsoon months signals a “bad year”, locals here told IPS. In such cases, the government is tasked with providing 50-kg bags of wheat to the 250,000 households who are not able to feed themselves without assistance.

But poor management of food aid, together with corruption along the supply chain and hoarding by contractors has disrupted the entire system. Amar alleged that a large number of wheat bags were in fact filled with sand. It is only one such anomaly that is plaguing the entire population of some 1.5 million people. 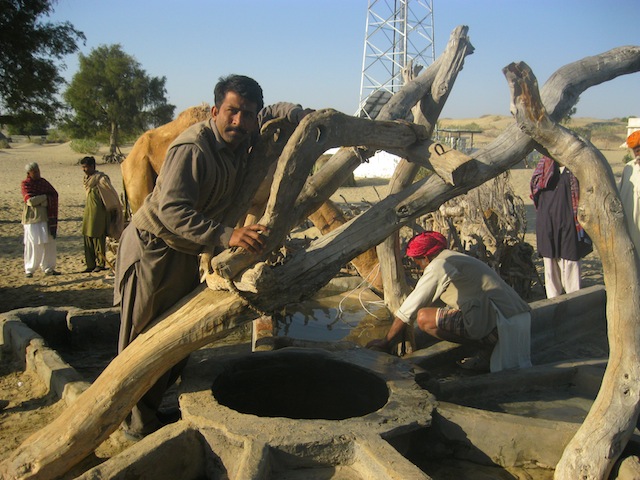 A long drought has resulted in a death toll of some 650 people in Tharparkar, most of them children. Credit: Irfan Ahmed/IPS 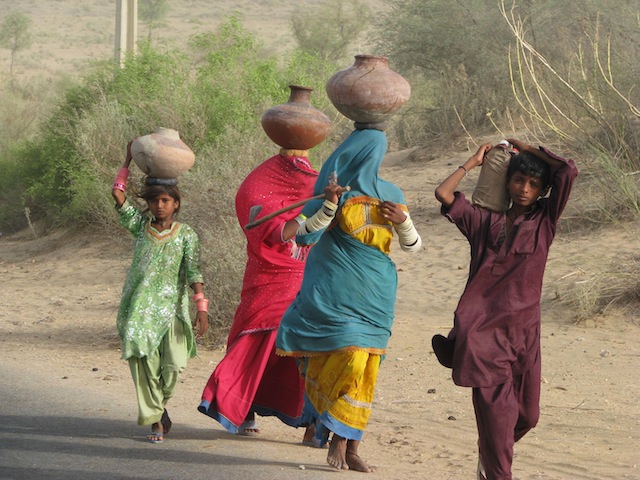 Agriculture and livestock farming are the primary livelihoods here, no easy task in an arid region where rainwater harvesting and underground wells – sometimes 400 feet deep – provide the only source of fresh water.

NGOs struggle to keep up

Independent efforts to intervene in the crisis have been unable to combat the spiraling death toll. Dominic Stephen, chairman of the Sindh-based relief organisation Future in Our Hands Pakistan (FIOHP), said that the government supplied wheat at the start of the drought, but later slowed its efforts. 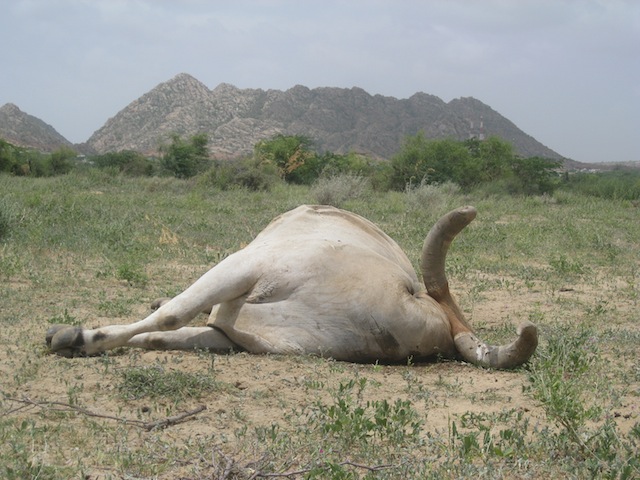 Agriculture in Tharparkar is totally dependent on rains. Since 2011, the monsoon season – which typically lasts from June to September – has brought less than average rainfall. Thousands of animals have starved to death as a result. Credit: Irfan Ahmed/IPS 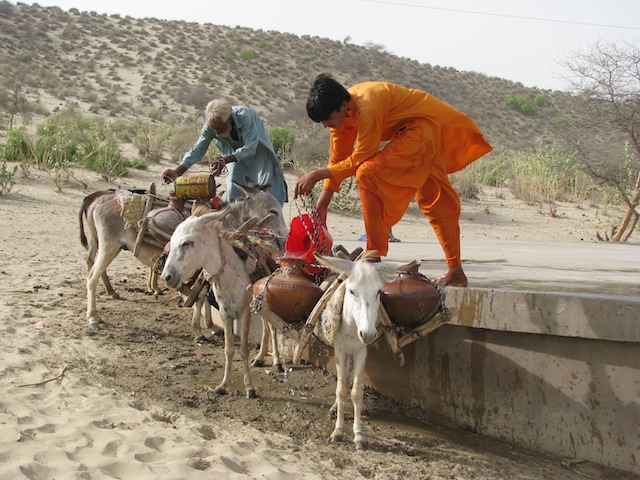 Locals here are almost entirely dependent on their cattle for food, livelihoods and water security. With so many animals perishing from disease and starvation as a result of the drought, many fear that they will slide further into poverty. Credit: Irfan Ahmed/IPS

FIOH is performing some relief work at the local level, but cannot single-handedly cover the entire district, whose population is spread out over 2,300 villages in an area spanning 22,000 square km.

Stephen also told IPS that the government is relying on 16-year-old data, gathered during the 1998 census, to determine who is in need of aid. “This is why many victims have not received emergency supplies,” he added.

Long-standing structural inequalities in the region are now exacerbating the impacts of the drought. Research indicates that Tharparkar has the lowest Human Development Index of all 25 districts in the Sindh province.

Malnutrition and poor healthcare facilities, always a thorn to be reckoned with, are now contributing to a rising death toll as scores of people, mainly children, fall victim to diarrhoea and pneumonia.

Dr. Sono Khangrani, CEO of Hisaar Foundation, an NGO working in Tharparkar, told IPS that other socio-economic conditions must be taken into consideration, such as the stubborn practice of early marriages, which result in high infant and maternal mortality rates.

A lack of livelihood opportunities in the region has pushed locals to look for work elsewhere; those who commute for work are sometimes unavailable to receive food supplies when they are delivered, he explained.

Those who have found permanent employment in cities, as casual labourers on infrastructure projects, exchange their surplus food stocks for cash, resulting in reduced wheat supplies in times of hardship. 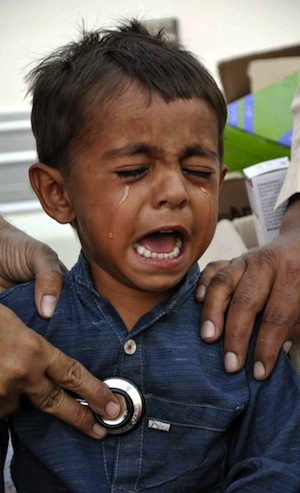 A child cries with pain while he undergoes a medical check-up at a makeshift hospital. Experts say healthcare facilities in Tharparkar leave a lot to be desired. Credit: Irfan Ahmed/IPS

Meanwhile, a judicial inquiry into the situation in Tharparkar conducted in November last year found that over 20 percent of health professionals and officers in the provincial government, who originally hailed from the drought-struck district, had not been posted there.

The report concluded that these public servants should return to the district, to apply their knowledge of the area and its problems to the betterment of the people.

Some claim that the government’s neglectful attitude towards the region, which has resulted in rampant under-development, is due to the large Hindu population in the area. A resident of Tharparkar who did not want to be named alleged that the government was less concerned about the people since 35.6 percent of the population was Hindu, while 64.4 percent were Muslim.

The government, for its part, has refuted such allegations. Senator Taj Haider, coordinator of the Tharparkar Relief Committee (TRC) formed by the Sindh government, denied that hunger and malnutrition were behind the number of deaths, claiming instead that pre-mature births and poor maternal health were the biggest culprits.

Taj added that the Sindh government was vigilant of the drought and was pursuing a long-term strategy involving development of the entire district, rather than simply providing emergency aid.

“We plan to install 750 Reverse Osmosis (RO) plants in the Thar Desert by July 2015,” he told IPS. “This will provide Tharis sufficient water for drinking and irrigation and help avoid droughts in the future.”