WASHINGTON, Mar 7 2012 (IPS) - Two days after U.S. Attorney General Eric Holder outlined the statutory justifications for “targeted killings”, civil liberties groups here continue to question the legality of the Obama administration’s policy, particularly as it applies to the rights and very lives of both U.S. citizens and foreign nationals. 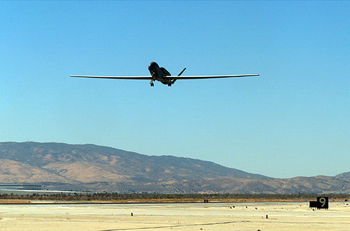 The use of drones for targeted assassinations in Yemen and elsewhere has created a storm of controversy in the United States and beyond. Credit: Northrop Grumman/CC by 2.0

Speaking before law school students on Monday, Holder rebuffed claims that the president is required, under the U.S. Constitution, to obtain permission through a process of judicial review to assassinate U.S. citizens suspected of involvement with al-Qaeda.

Holder argued that the distinction between due process – the right guaranteed to U.S. citizens that the government cannot deprive life without due process of law – and judicial process – the system of military courts used to try suspected terrorists during a time of war – was an important one.

“The Constitution guarantees due process, not judicial process… These circumstances are sufficient under the Constitution for the U.S. to use lethal force against a U.S. citizen abroad – but it is important to note that the legal requirements I have described may not apply in every situation,” Holder noted.

Although the Obama administration has stated publicly that its policy to assassinate U.S. citizens and foreign nationals allegedly involved with terrorist organizations does not fall outside of legal bounds, the actual decision-making process – how, when and under what circumstances – through which authority is granted remains classified.

The debate over targeted killings reignited in December 2011 when President Obama signed into law a bill that included language reaffirming the executive’s right “to use all necessary and appropriate force” in combating terrorism.

“We have had all of these arguments since 2010. They are inadequate,” Mary Ellen O’Connell, a professor at the University of Notre Dame who specialises in international dispute, told IPS.

“This is the global war on terror with a new name – the same global war on terror that President Obama dismissed on the campaign trail” in 2008, O’Connell added. “The U.S. has always had a policy against targeted killing for legal, moral and strategic reasons. None of these reasons have changed.”

An increase in attacks – and in debate

Obama has doubled the number of drone attacks conducted by the previous U.S. administration in Pakistan and Afghanistan. The most notable case of officially sanctioned assassination came in September 2011, when a U.S. drone killed Anwar al-Awlaki, a U.S. citizen and senior operative of al- Qaeda’s affiliate organization in Yemen.

Since 2009, the number of civilian and militant deaths from such attacks has been hotly contested by government officials and outside groups.

Officials in the U.S. Department of Justice and intelligence agencies have declined to release government memos describing the justification and details of drone operations abroad, despite a recent motion filed by the American Civil Liberties Union (ACLU) under the Freedom of Information Act for publication.

The speech is “ultimately a defence of the government’s chillingly broad claimed authority to conduct targeted killings of civilians, including American citizens, far from any battlefield without judicial review or public,” Hina Shamsi, a specialist in national security issues for the ACLU, said in a statement on Monday.

She called the speech “a gesture towards additional transparency”.

Holder also argued that certain legal principles “do not forbid the use of stealth or technologically advanced weapons”, such as covert operations and unmanned aerial vehicles, or drones, used to kill militants and foreign nationals suspected of posing an “imminent threat” to U.S. national security.

But the use of such methods has set controversial precedents that may violate international law, Laura Pitter, a specialist on U.S. counterterrorism policy for Human Rights Watch, told IPS.

“The reason it’s important to comply with international law is that there are standards that all countries use when applying lethal force so that countries like Russia and China, when they have these technologies, all apply the same standards,” Pitter explained.

While the speech provided the clearest insight to date regarding the administration’s legal framework for assassinations of U.S. citizens, Holder avoided detailing the implications of such a policy for foreign nationals.

“[The speech] deals with what would be justified for a U.S. citizen,” said Pitter. The fact that it didn’t address non-citizens leaves “little basis for determining whether the U.S. is meeting its legal obligations when it conducts these operations in regard to non-citizens,” she added.

“Each targeted killing that occurs takes place in different circumstances, and all of it is secret because it’s being conducted by the CIA…We’ve called for a long time for them to be conducted under military authority, which has greater transparency,” Pitter added.

The search for justification

Holder’s speech briefly touched on sovereignty issues related to the drone campaigns – a point of bitter disagreement between U.S. and Pakistani officials – and cited the fundamental legal principles guiding the use of force during wartime, including those of proportionality and humanity, statutes ostensibly put in place to avoid excessive “collateral damage” and “unnecessary suffering”.

“He mention[ed] a right to attack states that are ‘unable or unwilling’ to control criminality on their territory. There is simply no such right in international law,” Mary O’Connell, the Notre Dame professor, added.

As human rights groups and some Congressional leaders remain adamant that the White House publicly declare, in concrete terms, its assassination policy in a broader context that includes a legal justification for killing both U.S. citizens and foreign nationals, drone operations continue in many countries around the globe.

“The most important point to note for this entire debate is how perverse and warped it is that we’re even having this ‘debate’ at all,” wrote Glenn Greenwald, a writer specialising in constitutional and civil rights, wrote Tuesday on his Salon.com blog.

“It should be self-negating – self-marginalizing – to assert that the president, acting with no checks or transparency, can order American citizens executed far from any battlefield and without any opportunity even to know about, let alone rebut, the accusations.”