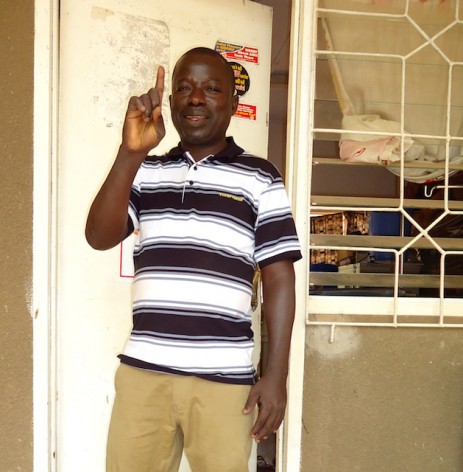 Model of Hope activist Sulemana Sulley lives positively with HIV and teaches others how to do it. Credit: Albert Oppong-Ansah/IPS

TAMALE, Feb 19 2014 (IPS) - With tears rolling down her cheeks, Zainab Salifu queued at the fevers unit of the Tamale Teaching Hospital in northern Ghana. Earlier in the day, the 18-year-old had been diagnosed HIV positive.

Despite the kind counselling offered by senior nurse Felicity Bampo, Salifu felt her world was crumbling. She wanted to die.

As Salifu told IPS, she began sobbing hysterically and dropped to the floor. People gawked at her. Then a middle-aged man approached her, took her hand and led her to a quiet corner.

Fast Facts About HIV in Ghana

Hope had arrived in the form of Sulemana Sulley. He told Salifu that he contracted HIV 10 years ago through an extramarital affair and unknowingly infected his wife. But the couple remained together, both are on antiretroviral (ARV) treatment, and have two HIV negative children.

“This is not the time for weeping,” he told Salifu. “Accept your condition. HIV is not a death warrant. Concentrate on taking your ARVs, eat well and exercise.”

“You are not alone, anyone can get the virus. Look at me,” he added.

Sulley works for Model of Hope, a volunteer group set up by Catholic Relief Services. Its 19 members in Tamale were trained as community counsellors by the Ghana AIDS Commission.

With a population of 540,000, bustling Tamale, 600 kms north of Accra, the capital, is the country’s fourth-largest city and hub of the northern region.

Every Tuesday and Friday, designated days at Tamale Hospital for HIV testing and ARV collection, volunteers are at hand to help people deal with a fresh diagnosis and check how patients on treatment are coping.

Bampo tests and counsels an average of six to 10 young people daily, most through doctors’ referrals. Few come by their own choice, she told IPS.

“Voluntary testing is not popular among young people because they fear being stigmatised”, she said.

Among sexually active youth aged 15-24, just four out of 10 women and only two out of 10 men have ever been tested, according to the 2011 Ghana Multiple Indicator Cluster Survey (MICS).

“Most people are aware of HIV and some of its symptoms but few know that ARVs will boost their immune system so they can live long,” said Bampo.

Low prevalence brings its own problems: lack of familiarity with managing the disease, high levels of stigma and low levels of tolerance.

Just six percent of women and 15 percent of men aged 15 and above accept people living with HIV, according to the MICS.

Salifu, a final year trainee at a vocational school, told IPS that she was infected by her one and only boyfriend. She broke up with him but has not yet mustered the courage to tell him or her family about testing HIV positive in December 2013.

Like Salifu, seven out of 10 women would hide that a family member is infected with the AIDS virus.

Sulley blames the widespread perception that the virus brings immediate death and that one can contract HIV by associating with infected persons.

“We have stopped all our free testing events because the test kits have been directed to pregnant women.” -- Nuhu Musah, coordinator of the HIV and AIDS Support Unit
In 2013, Sulley counselled about 200 young people newly diagnosed, most of them students. Many had suicidal thoughts, and Sulley and his colleagues work hard to teach them to live positively and happily.

Sulley told IPS that several teenagers have committed suicide in recent years after learning they were HIV positive.

Nuhu Musah, coordinator of the HIV and AIDS Support Unit in Ghana’s northern region, regrets that the youth-oriented Know Your Status Campaign has been halted for lack of test kits.

“We have stopped all our free testing events because the test kits have been directed to pregnant women,” he told IPS.

The campaign held monthly outreach programmes in communities and at national events, like Independence Day, to encourage testing.

According to Musah, the northern region has four youth-friendly centres for HIV testing and sexual health but for lack of resources they are not working.

This will not improve the dismal figures of HIV testing and knowledge among young people.

Nationwide, only four out of 10 young men and women aged 15-24 have comprehensive knowledge about AIDS, the MICS found.

Northern Ghana has the lowest comprehensive knowledge for men and women, 17 percent, compared to 47 percent in Greater Accra.

MICS data show that Ghana is falling short of its target of having 95 percent of youth aged 15-24 fully informed about HIV by 2015.

“Comprehensive knowledge of HIV prevention and transmission is still low in Ghana, despite the many years of public sensitisation,” concluded the survey. “Concerted efforts should be directed at young people as many continue to get infected due to low levels of comprehensive HIV knowledge.”