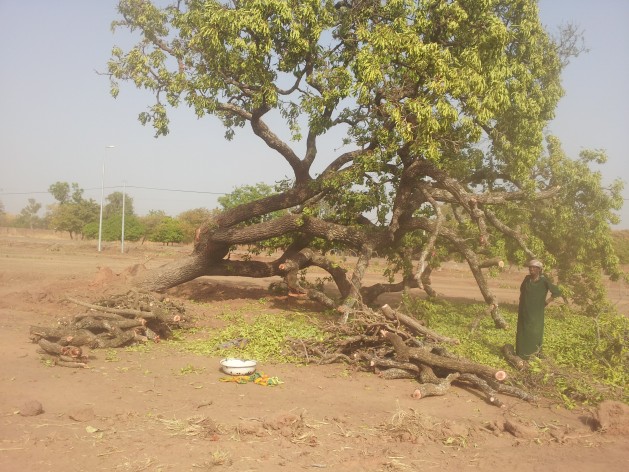 40-year-old Alima Asigri stands by a shea tree with logs ready to be transported for processing into charcoal. Credit: Albert Oppong-Ansah/IPS

TAMALE, Ghana, Jul 10 2014 (IPS) - The shea tree, a traditional African food plant, represents a major source of income for women in Ghana’s Northern, Upper West and Upper East regions, but they are helping to destroy the very resource that gives them money by cutting it down to produce charcoal.

An estimated 900,000 rural women are involved in the shea sector in northern Ghana, mostly collecting the tree’s fruit to transform it into butter. Shea butter production contributes about 18 million dollars annually to the country’s economy.

One such woman is 40-year-old Alima Asigri from Bagrugu, a community in the Karaka district of the northern region of Ghana, who, together with her four children, is fully engaged in the harvesting of shea fruit which she turns into butter for eating and cooking because it is rich in vitamins A, E and F. The butter is also used as a body cream.

On average, the family produces more than 20 kg of butter every two weeks during the peak season from April to August, earning 1,100 cedi (394 dollars) which go towards the family’s upkeep and the children’s educational needs.

“Sometimes I think about how fast the resource [shea] is depleting but I have no income-generating venture other than that. It’s my livelihood, especially during the off-farming season” – Alima Asigri

Today, the shea tree is increasingly being used for its wood and not its fruit. “We also cut shea trees and process its wood into charcoal. The charcoal business is booming because of buyer demand for charcoal from shea trees rather than ordinary trees. They believe it is robust, lasts longer and is cheaper than liquefied petroleum gas (LPG),” Asigri explained.

A United Nations Food and Agricultural Organisation (FAO) report on ‘Woodfuel Use in Ghana: An Outlook for the Future’, indicated that about 69 percent of all urban households in Ghana use charcoal for cooking and heating, and the annual per capita consumption is around 180 kg.

According to the report, total annual consumption is about 700,000 tonnes, 30 percent of which is consumed in the country’s capital Accra. Fuel wood accounts for about 71 percent of total primary energy supply and about 60 percent of final energy demand. An estimated 2.2 million families depend on charcoal for household chores and some 600,000 small-scale enterprises depend on fuel wood or charcoal as their main sources of energy.

However, this is taking its toll on the country’s trees. In an interview with IPS, Iddi Zakaria, Coordinator of Shea Network Ghana (SNG) recalled that some 40 years ago in the Salaga district of the Northern Region, shea trees covered the entire area but now, due to constant usage and no conscious attempt  to replant, the natural resource has been depleted.

“It used to be a taboo to cut shea and other economic trees. One needed to seek permission from the chief’s palace before, but it’s different now”, he said.

He noted that a recent study by the Savanna Alliance research company had revealed that Act 571, which established the Forestry Commission of Ghana as a corporate body and mandated the commission to protect and regulate the utilisation of forest and timber resources, failed to include shea, dawadawa and baobab trees.

“The policy and institutional shortfall in the management and conservation of the sector has led to continued harvesting of shea trees indiscriminately for fuel wood and charcoal,” Zakaria told IPS, adding that even though laudable efforts are being made by stakeholders to reap the benefits from the shea sector, the future sustainability of the raw material is questionable.

“What players are asking of government are legal reforms to protect resources,” he said.

Ebenezer Djaney Djagletey, Northern Regional Director of the Forestry Commission confirmed that shea trees are not among the protected tree species listed in the forestry regulations.

Djagletey said that he was concerned about the depletion of resources due to activities such as infrastructure development, sand weaning, bush burning and farming, all of which involve the clearing of vegetation.

“Some 80 out of 100 sacks of charcoal produced are from the shea tree, the other 20 come from the neem tree and the dawadawa tree, the fruit of which is used as a cooking spice”, he said.

To discourage people from using charcoal and other fuel wood, the Ghanaian government has announced plans to distribute 50,000 six-kilogramme gas cylinders and cooking stoves to some rural areas under its Rural Liquefied Petroleum Gas (LPG) Promotion programme. According to

However, Collins Kyei Boafoh, an outreach specialist with ACDI/VOCA (Agricultural Cooperative Development International and Volunteers in Overseas Cooperative Assistance) described the government policy as a “bad” policy and expressed scepticism about the initiative because of periodic increases in the price of LPG.

“The question is who refills the gas cylinder when it is finished. It cost about 10 cedi (3.59 dollars) to buy gas and relatively few rural folk have enough money and will opt for charcoal or fuel wood instead of gas,” he said.

He advises the government and development partners to support women with alternative livelihood skills, such as soap-making, and build more shea processing centres with guaranteed prices for shea butter to reduce the charcoal business.

Alima Asigri in Bagrugu could be one of the women to benefit if such support were to materialise and she is already aware of the harm her activity is causing to the environment.

“Sometimes I think about how fast the resource is depleting but I have no income-generating venture other than that. It’s my livelihood, especially during the off-farming season,” she told IPS. “Besides, thanks to the shea business, I have been able to educate my first son through university education and he’s now doing his further studies in Belgium.”