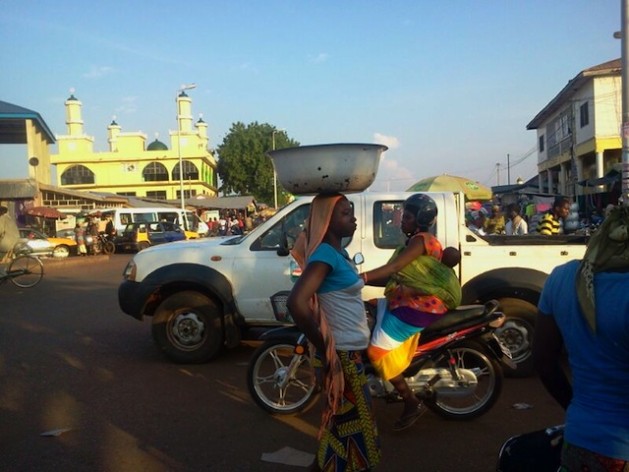 Children and adults from Northern Region who migrate to southern Ghana in search of a living usually take up work as “Kayayeis” or porters. Courtesy: Albert Oppong-Ansah

ACCRA, Dec 13 2013 (IPS) - It was 20-year-old Fizer Boa who first migrated south to Ghana’s capital, Accra, to work in the local Abobloshie market as a porter or “Kayayei”.

“I agreed with my mother when she advised me to go join my friend who was working as a Kayayei in Accra. I did not object to the idea because … we hardly had three square meals a day,” she told IPS. Reduced rainfall in the Bunkpurugu-Yunyoo district in Ghana’s Northern Region, where Boa comes from, has resulted in low yields for the past two years, leaving her family barely able to survive.

In the city, Boa’s job involves carrying loads of goods on her head or back from one place to another for fees as low as 50 cents or as high as six dollars.

Soon after she came here, her two sisters dropped out of school and left their home to follow her and also work as Kayayeis.

"It is evident ... that land scarcity and soil infertility are one of the main elements pushing people off the land to seek a safe-haven in the south.” -- research scientist Dr. Wilson Dogbe

“My other siblings dropped out of school to join me in Accra because my mother could no longer pay for additional school levies, such as Parent Teachers Association fees, and school materials,” Boa said. Schooling is usually free in this West African nation, though each school charges its own additional costs and administration fees.

Combined, the sisters earn up to 30 dollars on a good day.

Kayayei is a trade often taken up by children and adults from the Northern Region who migrate to southern Ghana in search of a living. And according to Dr. Wilson Dogbe, a research scientist at the Savannah Agriculture Research Institute of the Council for Scientific and Industrial Research, one of the major causes of this migration is the changing environment in the north.

The Northern Region is a predominantly rural-based community, and farmers there have become vulnerable to the impact of climate change.

“The problem is that the Northern Region currently is experiencing low rainfall, soil infertility, and increased temperatures as high as 47 degrees Celsius. It is evident from research conducted over the past few years that land scarcity and soil infertility are one of the main elements pushing people off the land to seek a safe-haven in the south,” he said.

The Northern Sector Action on Awareness Centre (NORSAAC), an NGO based in the Northern Region’s capital Tamale, estimates the number of Kayayei in Accra and Kumasi, a city in southern Ghana, is over 80,000.

Some of these climate refugees, who are mostly young girls between the ages of 18 and 30 sent by their families to earn an income, fetch water for people, work in chop-bars (local restaurants), and as hawkers and shop attendants.

But their existence is a precarious one. Mohammed Awal, NORSAAC’s director, told IPS that the young girls were the most vulnerable of these climate refugees as they had no place to live and mostly slept in open-air truck stops at the mercy of the weather and other threats.

“A lot of these migrants, especially girls, return home to their families with sexually transmitted diseases,” he said, adding that many of the young women who fell pregnant were unable to trace the fathers, or experienced problems with illegal abortions.

Boa said she sometimes faced “life-threating situations like sexual harassment from men” and said she too was forced to sleep in open-air truck stops.

Dogbe said the Savannah Accelerated Development Authority (SADA), established in 2010 by the government to alleviate poverty in Ghana’s north and address the north-south youth migration, had not done much to reduce migration.

“It was supposed to provide opportunities for poor peasants, especially women, to own assets … sustain their food crop production and protect the fragile eco-system of the Northern Savannah Ecological Zone. But much has not been done,” he said.

He said that 80 percent of the roads in Northern Region remained impassable and farmers still did not have the necessary machines like tractors and harvesters to make their jobs easier. He added that farmers also needed soft loans to be able to purchase the right inputs and seeds.

However, Ghana’s deputy minister of food and agriculture Ahmed Yakubu Alhassan told IPS that SADA and the Ghana Commercial Agriculture Project would ensure the region once again became Ghana’s breadbasket.

The World Bank and the U.S Agency for International Development have funded the agricultural project to the tune of 145 million dollars to develop infrastructure, such as roads and irrigation schemes, in order to improve agriculture productivity in the Accra Plains and the Northern Savannah Ecological Zone.

But until this happens Boa and her sisters will keep trying to find ways to earn a living far from home.

“Hopefully, we will work hard to save money and send some to our parents,” she said. But she and her sisters dream of having a better life and being more than just porters. They hope to be able to enroll in vocational training “such as fashion design, hair dressing to be able to earn a decent as well as sustainable income.”