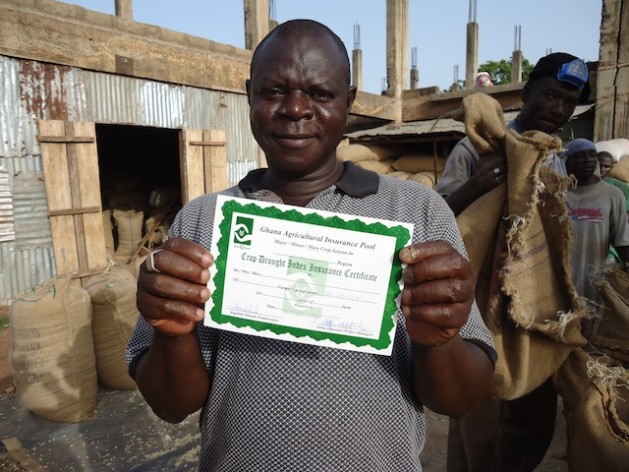 TAMALE, Ghana, Jul 18 2013 (IPS) - Smallholder farmer Suleman Mustapha Simbia, 40, is pleased with the introduction of an insurance initiative called the Ghana Agriculture Insurance Programme. The programme is being implemented in this West African nation to help farmers who had been suffering from loss of income as a result of the bad weather conditions that affect their yields.

“I no longer think of losing my yield due to the low or high rainfall. My confidence and love for farming has grown. And this year, I have increased the number of acreages I cultivate from 1.2 to 2.4 hectares,” he told IPS.

The system is fairly straightforward. A farmer pays one-tenth of the total cost of their crops at the beginning of the farming season to GAIP. And if there is no rain for 12 consecutive days, the system triggers a payout.

This is the second year of its operation, and to date a total of 136 smallholder farmers received payouts on claims from the Ghana Agriculture Insurance Programme (GAIP) because of the drought in northern Ghana. While no exact figures are available for how much was paid out, the programme pays farmers depending on the size of their land and the amount they invested in inputs. On average, farmers who invest 150 dollars in inputs for half a hectare of land could be paid out between 200 to 300 dollars, depending on how severely they were affected by the weather.

But the scheme is dependent on automatic weather stations (AWS). AWS is a map-based system that records daily climatic data including wind, rainfall, relative humidity and temperature. The insurance programme uses data from AWS to ascertain when farmers are affected by the weather, and payouts are made based on this data.

Agro meteorologist at GAIP Evelyn Debrah told IPS that the programme benefits farmers by protecting them from the cost of production during extreme weather patterns and allows them to remain in production following the disaster.

“For example, if there are more than 12 consecutive dry days (less than 2.5 mm of rain) within 20 km of a GMet weather station, it will automatically trigger a payout to policy holders,” she said.

The initiative is funded by the German government under the Innovative Insurance Products for the Adaptation to Climate Change project. It is implemented through a public private partnership between the National Insurance Commission, the Ghana Insurance Association and the German Agency for International Cooperation (GIZ).

But Simbia is concerned that not enough farmers are able to sign up to the insurance scheme as only those who cultivate crops within the vicinity of 18 existing AWS in the country’s Northern Upper West and Upper East Regions can do so.

“It is my fear that many farmers in the country, especially in Ghana’s north, who are vulnerable are not benefiting from the initiative due the challenge of limited weather stations,” he said.

For the past four years smallholder farmers in Ghana’s Northern, Upper West and Upper East Regions have been affected by low rains, which resulted in their most-cultivated crops like maize, rice and yams withering before they could mature.

Statistics from the Ghana Meteorological Agency (GMet) indicate that across the country there has been a decline below the long-term mean of 6,550 mm, which was the normal rainfall pattern at the beginning of the 2000s.

Mathias Fosu, principal research scientist at the Savanna Agricultural Research Institute, told IPS that studies conducted by the institute indicate that climate change has impacted on rainfall patterns in the northern part of the country.

The amount of rainfall recorded annually varies between 800 mm and 1,600 mm. However, the rainfall trend for Tamale from the period 1960 to 2010 suggests a slight decrease in rainfall over the six decades, he said.

A 2012 survey conducted in 38 districts in the Northern, Upper West and Upper East Regions by the United Nations World Food Programme, with Ghana’s Ministry of Food and Agriculture and the Ghana Statistical Service, showed that food insecurity was rife in those areas.

The survey, titled the Comprehensive Food Security and Vulnerability Analysis, revealed that 140,000 people out of 680,000 interviewed were experiencing severe food insecurity, and women, mainly widows, headed the majority of these households.

The situation was attributed to general poverty and poor agriculture performance. A decline in crop production, low soil fertility and limited pesticide use and the lack of irrigation are some of the factors affecting this. The report recommended increased investment in adaptation measures to sustain agricultural production and make households resilient to climate change.

Simbia thinks GAIP and the government should do this by expanding the scope of the initiative from the current 18 automatic weather stations to cover a total of 50 districts in the three northern provinces.

But Debrah pointed out that the number of AWS had increased countrywide.

“In the last two years GIZ purchased and installed a total of 36 automatic weather stations for GMet … with the aim of helping GAIP improve and expand their service to famers,” Debrah said. She added that five additional AWS were purchased and installed by the Agricultural Development and Value Chain Enhancement Programme, which is funded by the United States Agency for International Development, bringing the total to 41 AWS nationwide.

One large-scale farmer, Alhaji Alhassan Gunda Zakaria who owns and runs the Gunda Producing Company in Tamale, thinks that the insurance is a good thing.

Aside from farming himself, he provides farming inputs like seeds and fertiliser to smallholders on credit, which they pay back in produce at the end of the harvest season. Last year, he paid for the insurance for 20 of the smallholder farmers he works with, and this year he added 50 more.

Zakaria said he manages about 3,000 smallholder farmers in the region and he was one of the first beneficiaries of the insurance.

“I think I will have peace of mind to work because I will not need to worry much about low rains. I want to insure most of my farmers, but the worry now is the limited coverage of the weather stations in the region,” he told IPS.

“Banks are likely to expand their agriculture leading portfolios once the risk of default is reduced via locally relevant insurance products increasing their profitability in the process,” Debrah said.

“Insurance coverage will allow greater access to credit and inputs for more farmers and encourage greater investment in agriculture as farmers increase in confidence and aim to further commercialise their farming activities access to broader and even international markets,” she added.