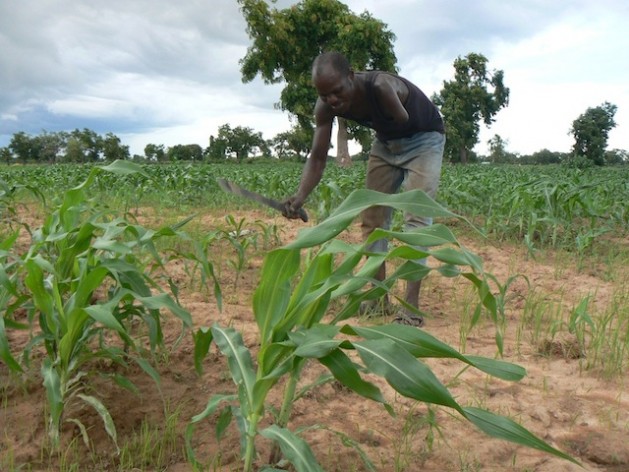 Farmer Adams Seidu has been struggling with his harvest in recent years. Courtesy: Albert Oppong-Ansah

TAMALE, Ghana, Aug 15 2012 (IPS) - In order to ensure that he and his family survive this year’s failed harvest, Adams Seidu, like farmers in other rural communities in Ghana’s Northern Region, has implemented a strategy for survival. They are using what Seidu calls the “one-zero-one strategy” for children, and the “zero-zero-one strategy” for adults.

The equation represents the three meals of a day. One represents a meal, while a zero represents no meal. So Seidu’s four children are able to have breakfast in the morning, nothing at midday, and then a meal in the evening, while he and his wife eat only one meal a day, in the evening – as do many other families in this West African nation.

Food shortages are becoming a concern in the region. A survey on nutrition conducted in March by the Ghana Health Service showed that 32.2 percent of the 208,742 children under five in the Northern Region were malnourished and suffered from stunted growth.

This is because Seidu, who lives at Fuo, a suburb in the Northern Region’s capital, Tamale, has been struggling with his harvest in recent years.

Ghana’s Northern, Upper West and Upper East Regions used to be the country’s breadbasket for production of cereals and tubers. But changing weather patterns in these regions, which constitute Ghana’s Savannah zone, have resulted in poor rainfall, small harvests and subsequent food insecurity.

“Last farming season was one of the most devastating periods and saw many farmers lose a great deal due to low rains, which caused the crop to wither before they could mature,” Seidu, who has a small maize, rice and yam farm, told IPS.

During the 2000 rainy season, the Nanumba North district in Northern Region recorded an average rainfall of 1,495 millimetres. But in 2010 over the same period the area recorded only 433 mm.

The reduced rainfall has had a dramatic effect on this region. According to the 2010 National Housing Population Census, the Northern Region is the third-most populated region in Ghana, with about 80 percent of the people engaged in farming. Now, half of the region’s farmers are struggling to survive as their crops continue to fail, according to the Ghana Statistical Service.

Of the two acres of land Seidu cultivated this year, he only harvested three 84-kilogramme bags. “Two years ago I harvested seven bags on the same land. Some of the plants did not flower, let alone bear fruit this year,” said the farmer, who has only one arm.

Statistics from the Northern Regional Office of the Ministry of Food and Agriculture indicate that maize production in the region fell from 164,200 metric tonnes in 1991 to less than half that, 78,800 metric tonnes, in 2000. There are no more recent figures available.

Regional principal meteorological officer at the Ghana Meteorological Agency, Kafui Quashiga, told IPS that rainfall has reduced drastically due to climate change over the past 10 years. Statistics compiled by the agency indicate that there has been a decline below the long-term mean of 6,550 mm, which was the normal rainfall pattern at the beginning of the 2000s.

“When you compare the rainfall data from 1991 to 2010 for Wa in the Upper West, Tamale in the north, Navorongo in the Upper East and Krachie in the Volta Region, there is a sharp decline and it is likely that the trend will continue,” he said.

Poverty, illiteracy, disease and malnutrition have now become common features in these regions.

Seidu admitted that because of his low harvest he could no longer afford to pay the school fees for two of his children. “As a result of the poor yields that we have witnessed in recent years, I am able to send only two of my four children to school.”

Another farmer, 60-year-old Nindoo Salisu, told IPS that only three of his 10 children are able to go to school. “We were able to get enough from the land until the weather decided to fail us and made us poor.”

“The situation is very scary, and the earlier something is done about it the better, because it has negative repercussions on our existence as human beings,” Quashiga said.

And while there are some adaptation projects in the region, they have not proved completely successful.

Abubakar Sadique Haruna, a farmer in Ghana’s Northern Region, loans out his tractor as a ploughing service to local peasant farmers.

With the help of the Agricultural Development and Value Chain Enhancement Programme (ADVANCE), Haruna provides his service to about 400 farmers.

ADVANCE, which is funded by the United States Agency for International Development, began to operate last year. Through it about 1,000 farmers have been supported with ploughing services, and educated in the use of improved seed, new technology and best farming practices.

Haruna explained that for every acre of land ploughed, the farmers either paid him four dollars – the equivalent of 4.5 litres of fuel – or in kind with an 84-kilogramme bag of maize at the end of the farming season.

Aside from his ploughing services, Haruna supplies farmers with improved quality seeds, agro chemicals and fertilisers. He also educates them on best farming practices to help increase their yields.

“The unfortunate thing is that some farmers, after paying for ploughing, are not able to afford these agro-chemicals (because of the bad harvests),” he told IPS.

Haruna said that 2011 was not a successful year for farmers, as about 200 of his clients could not afford to plough their fields.

The Ministry of Food and Agriculture’s monitoring and evaluation officer, Festus Aaron Langkuu, told IPS that new methods of harvesting water were being tested in some areas.

He said that the Golinga and Bontanga dams in the country’s Northern Region, which were rehabilitated under the Millennium Development Authority Project in 2010, were supplying some farmers with water for their crops.

“Although the government is supporting some farmers with fertilisers, the bottom line is that if there are no rains, these farmers cannot grow their crops, and this will derail (progress towards) the objective of reducing poverty,” Langkuu said.