LAMBAYAMA, Sierra Leone , Apr 19 2012 (IPS) - In the eastern Sierra Leonean community of Lambayama, rice paddies are carved far into the landscape before being abruptly halted by distant hills. Aside from a paved road that draws a grey line through the green, swampy valley, it looks much as it did a century ago. 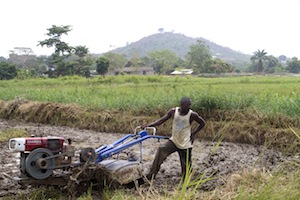 But under the sound of leaves rustling in the wind and chirping insects is the distant low hum of tilling machinery, a signal of the gradually changing way farmers are growing and selling this West African nation’s staple food.

The Smallholder Commercialisation Programme (SCP) is trying to put local farmers back in control of the country’s most-consumed crop. This government-run programme is in its fifth year of operation, and farmers say they are just beginning to discover there is money to be made in agriculture. Some components of the SCP are supported by the European Union and other development partners.

“Before, there was no profit. We had enough to eat, but not enough to sell,” said Zainab Makabu, who started farming rice to support her four children. “Now, we harvest, we sell some, we pay our children’s school fees and we eat some. Without this farming, we couldn’t educate our children.”

Increasing local rice production not only helps keep prices more stable, but also promotes national food security. Agriculture contributes about 50 percent of the country’s GDP and employs over 75 percent of the national work force. Still, most of the small farming in Sierra Leone is for sustenance – the farmers who produce it consume it or trade it without much money ever changing hands.

The SCP is trying to change the way farmers operate in three ways: by mechanising production, organising individuals, and promoting business. Through the programme, farmers are given seeds, machines, fertilisers, and training. The goal is to increase the crop yield and provide mechanisms that facilitate selling the product on the market.

“On the local level, small scale farmers are trying to expand on their production level, which is the thrust of the policy objective – to increase productivity through the farmer-based organisation. In the past, they were not getting the kind of requisite training that would help them increase their production levels. But now we see the farmers are getting the requisite training,” said Joseph Tholly, the District Agricultural Officer for the Lambayama community.

He added that previously farmers would just plant crops for their own consumption.

“They weren’t business-minded,” said Tholly. “In the past, you would only see old people involved in agriculture, but now we also see youth going into all different components of the business.”

Sierra Leone’s 1991-2002 civil war hit small farmers hard. Most of the fighting took place in rural areas, forcing many farmers to flee their land for Freetown, the capital city. But the city is congested with traffic and people, and there is not enough work to go around.

Tholly says the SCP programme tries to draw people back to the countryside with the potential of better pay and a higher quality of life. And it may be working. When the programme began, about 10 percent of people in his district earned their living from agriculture. Today, the number is closer to 60 percent.

“I’ve learned how to work this machinery and at the end of the day, I’m making a bigger profit for myself and my family,” said Emmanuel Kargbo, a 26-year-old farmer. “I don’t plan to do any other kind of work.”

On a local level, the hub of the SCP is the Agricultural Business Centre (ABC). These clusters of buildings house the machinery to harvest and process crops, store the rice before selling it, and act as the administrative centre for farming collectives.

Each farmer makes a contribution of rice every year, which the ABC sells, putting the money in an account to be used for things like equipment maintenance. In Lambayama, Joseph Fecah manages the finances for one of the country’s 108 ABCs. He says they have not only been able to make a profit through the commercialisation programme, but have used this money to build an additional storeroom with no assistance from the government.

“It is an expansion on traditional farming. Initially they were doing it on a small scale but the government is encouraging us to do farming on a larger scale,” said Fecah. “We have money going in constantly. We’re doing well, for now.”

The EU has supported development initiatives in Sierra Leone for the past 40 years, and has been involved in the small-scale agriculture programme since its inception. Through the European Agricultural Fund for Rural Development (EAFRD), the EU provides 16 million euros a year in donations for training and investment in initiatives like the SCP.

The programme has had its challenges, and with a 25-year plan, there is a long way to go. Farmers say they need more donations in the form of transportation to move their products, and better packaging to further increase the commercial viability.

**The original story that moved on Apr. 12 has been re-issued with new sources.