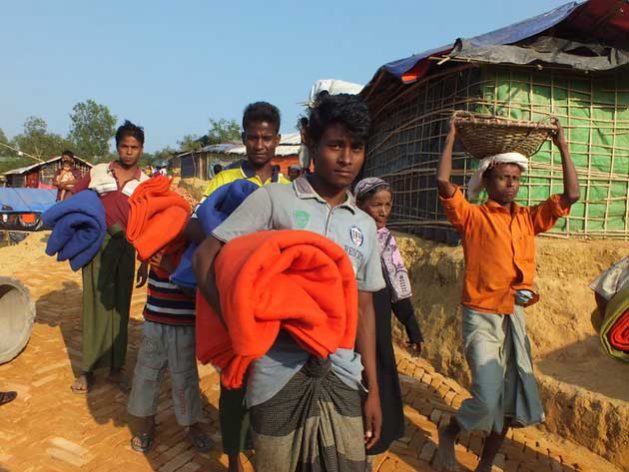 ROME, Nov 25 2019 (IPS) - Statistics and stories. When aid agencies appeal for funding to tackle the latest refugee crisis and journalists do their reporting, then these are the two narratives most chosen — one impersonal and the other upfront and individual. The sheer numbers can feel overwhelming. The UN refugee agency UNHCR says more than 70 million people are currently displaced by conflict, the most since the Second World War. Among them are nearly 26 million who have fled their countries (over half under the age of 18) and 3.5 million more are registered as asylum seekers.

Just last year, 13.6 million people were newly displaced, either as refugees crossing borders or as IDPs (internally displaced peoples). Syria accounts for the largest forcibly displaced population in the world, with nearly 13 million people on the move since war erupted in 2011, including 6.7 million refugees escaping across borders. Neighbouring Turkey is the world’s top host country, with 3.7 million displaced Syrians on its territory.

But then there are the images and personal stories that carry so much more impact than the bare statistics. For Syria possibly the most devastating, and also far reaching in political terms, was the picture of three-year-old Aylan Kurdi lying lifeless on a Turkish beach, drowned trying to reach Europe with his family. And the stories that do convey hope also make it seem possible to the public and donors that something can be done to help, even with relatively small amounts of money. Naturally everyone displaced by conflict has his or her own story, although it must be recognized that some would rather not tell theirs for reasons to be respected. I have my own to share, briefly.

I first became aware of Afghanistan when, as a young child in the ‘60s in what was then East Pakistan I read in Bangla, Rabindranath Tagore’s short story “Kabuliwalah”. The tale of the kind, compassionate man who periodically left his family behind to sell goods he carried in a large sack and make loans to Bengalis made a deep impression, as did his sense of humour and his attachment to a little girl Mini, clearly a cherished substitute for his own children back in Kabul. He was at first a rather frightening figure, giving her treats from his sack, but he slowly gained her and her father’s confidence and respect.

My next contact with Afghanistan was more direct, fraught with danger. While a student in an all-girls British run college in Lahore, Pakistan, my country of birth Bangladesh became independent. I fled what was then West Pakistan, avoiding camps and a protracted repatriation, to reach the newly independent country, taking a hazardous route by ‘tanga’ horse drawn carriages, trucks and buses across inhospitable terrain and mountain through Quetta and the border crossing of Chaman into Afghanistan. Along the way, in no man’s land, armed smugglers extorted more money from our group of about 40, some of them families with children, and one night we had to trek over mountains, exhausted to the point of hallucination. Fearing death but quite ignorant of the danger of rape, dressed in a white ‘burqa’ throughout the perilous journey, monitoring with piercing eyes the movement of those who were temporarily my guardian angels, I made it to the Indian embassy in Kabul after spending days in a dilapidated farmhouse in Kandahar, and, with Indian ID papers, we were flown to New Delhi then on to Kolkata by train, eventually making it to Dhaka after 552 hours of 23 harrowing days. I was fortunate to make it; the new country was still reeling from a war that cost millions of lives.

Nearly 50 years later that is so often not the case, and that is why we should consider shifting the dominant narrative, moving beyond the statistics and the stories to convey a fuller understanding of what is happening to these tens of millions of displaced people and why, particularly in Europe.

Reece Jones, a professor of political geography, has researched how in recent decades countries have become inter-connected through complex networks of transport and communication, but the purpose of borders has shifted to become the place where the movement of people is controlled.

“Border security and the construction of walls have increased dramatically in the supposedly borderless world of globalisation,” he says.

As walls and fences go up, so do the dramatic increases in migrant deaths. The Associated Press reports that 56,800 people died or went missing crossing a border from 2014-18.

Countries announcing new border barriers recently include Austria, Bulgaria, Estonia, Hungary, Kenya, Saudi Arabia and Tunisia. President Donald Trump’s “beautiful wall” on the US-Mexico border was a popular theme in his election campaign. Britain is spending some $200 million on border security in France, including the building of a one-km concrete wall in Calais to stop people hiding
themselves in trucks crossing the Channel.

Prof. Jones says the borders of the EU are “by far the most deadly” with roughly two-thirds of all migration related deaths occurring there or on the way to the EU. The high death rate, he says, is a combination of an extremely dangerous border in the Mediterranean sea coupled with increased enforcement that drives people to use smugglers and take more risks, as tragically seen in the deaths of 39 Vietnamese found in a refrigerated trailer near a UK port last month.

Walls did not work in the past and only divert but do not prevent migrant flows, so why are so many going up? The answer is political. Walls are effective as symbols used by politicians to demonstrate they are addressing perceived economic, cultural and security threats from migrants.

The crucial legal distinction between who a legitimate refugee and an “illegal” economic migrant is one fiercely upheld by politicians and institutions. However, as noted by Daniel Trilling, author of Lights in the Distance: exile and refuge at the borders of Europe, the system of placing people into categories does not always fit the reality of their lives. And when the system breaks down, “people are cast into a legal and moral grey zone that lasts for many months or even years”.

The EU, says Trilling, has perhaps the world’s most complex system to deter unwanted migrants, spending billions of dollars on surveillance systems and patrols on land and sea. In reality the EU tries to prevent even genuine asylum seekers from reaching its territory.

“Asylum seekers are subject to particularly complex and often violent filtering. Once they cross Europe’s frontiers, their movement is restricted: they are locked up or segregated in accommodation far from city centres. Their right to work or to access social security is denied or severely limited. While their claims are being assessed, often by a process that is opaque, hostile and inconsistent, they
live with the threat that the freedoms they do have may be curtailed at any moment.”

A sense of panic and chaos is fuelled in the public by even twists of language, just as the media dubbed the Calais migrant settlements “the jungle”. The idea of a “global refugee crisis” may provoke sympathy among some, but it is also used by populist parties to spread the sense that we are at “breaking point”. More people are displaced by conflict than before but, as Dutch sociologist Hein de Haas points out, more than one in 10 migrants entering Europe do so legally. Well over 80 percent of displaced people remain in the developing world, such as the 4.5 million made homeless by scattered conflicts within the Democratic Republic of the Congo (DRC), or 4.6 million Venezuelans who have fled their country, its economy in tatters and under US sanctions.

In the future far greater displacements of people may occur for complex and interrelated reasons — war, the climate emergency, and outbreaks of diseases like Ebola in the DRC. Rapidly changing circumstances can make refugees of people most unexpectedly. Solutions lie in policy and resources.

Can we change the narrative ?