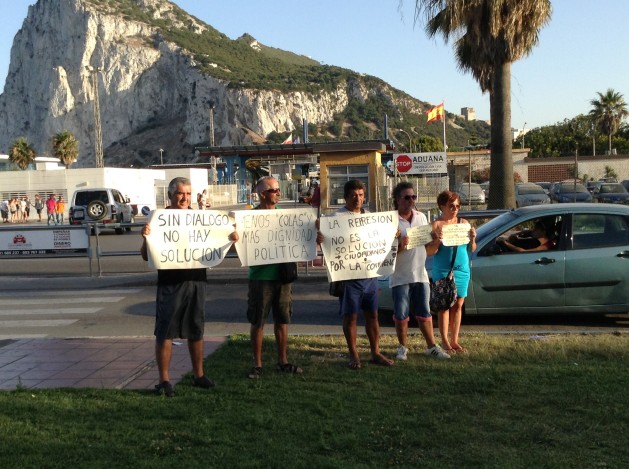 "Without dialogue, there is no solution" say Spanish workers at the Gibraltar checkpoint. Credit: Alberto Pradilla/IPS

LA LÍNEA DE LA CONCEPCIÓN, Spain , Aug 12 2013 (IPS) - “The situation is messed up. Spain is on the verge of a civil uprising and the government is trying to divert attention” by tightening border controls to Gibraltar and provoking tension, complained Manuel Márquez, a delegate for the Socio-cultural Association of Spanish Workers in Gibraltar (ASTECG).

Márquez was speaking alongside several of his fellow union members at a protest in front of the police checkpoint on the border between the small southern Spanish town of La Línea de la Concepción and the 6.8-sq-km British overseas territory of Gibraltar.

Spain has historically claimed sovereignty over the Rock of Gibraltar, which was conquered by the British in the early 18th century, although Gibraltarians have repeatedly expressed that they want the territory to continue to belong to Britain.

Tensions in the area mounted over recent days when the Spanish government of Prime Minister Mariano Rajoy of the rightwing People’s Party stepped up border checks, causing long tailbacks of up to seven hours for people trying to cross the border, and suggested a toll of 50 euros (67.50 dollars) might be introduced.

An international row has erupted, with Britain considering legal action against Spain. A spokesman from the British prime minister’s office said on Monday Aug. 12 that the Spanish border measures were “politically motivated and totally disproportionate,” adding “we are now considering what legal action is open to us.”

The announcement came as four British Royal Navy warships prepared to set sail for the Mediterranean in what defence officials stated was a long-scheduled deployment. One of the warships is due to dock at Gibraltar.

Spain has said it will not back down. The European Commission (the EU executive) plans to send a team of investigators to the border in the next couple of weeks to observe the controls, following complaints from several members of the European Parliament (MEPs) and EU citizens about long waits there.

Spanish media reports suggested that the diplomatic row could escalate to the United Nations, with Spain receiving support from Argentina. The El Pais newspaper reported that Spanish foreign minister Jose Garcia-Margallo is expected to propose that the two countries present a “united front” over Gibraltar and the Malvinas/Falkland Islands, claimed by Argentina from Britain.

The situation is complex. On the one hand is the sovereignty dispute, and on the other, the uneasy coexistence between Spaniards and “llanitos”, as residents of Gibraltar – a tiny peninsula of land mostly occupied by a large rock – are known colloquially.

But many are wondering why the situation has escalated just now.

The Spanish government has said that the problem originated as a fishing conflict in late July when Gibraltarians dropped concrete blocks into the sea, creating an artificial reef.

But there is a general feeling in the area, especially among the trade unionists, that Rajoy is using the crisis to divert attention from the corruption scandal hovering over his government, and from the country’s economic crisis.

Meanwhile, those who are most disadvantaged by the conflict are the people whose livelihood depends on crossing the border in their daily commute.

“This is a complete waste of time. La Línea and Gibraltar have always had good relations; it is up to the government to solve this,” complained José Antonio García, who had been waiting for over an hour and a half to cross the border and fill the tank of his car with petrol when he spoke to IPS.

Prices in Gibraltar are lower than in Spain because no taxes are paid in the territory, which is known as a tax haven because banks also enjoy a special regime.

A man in his seventies, who did not want to be identified, told IPS: “I’m unemployed, I have six grandchildren and I have to feed them. I will wait as long as it takes, because one carton of cigarettes will make my day’s sales.”

Cigarette smuggling is one of the most lucrative illegal businesses here. A 10-pack carton, costing 40 euros (53.57 dollars) in Spain, costs barely half that in Gibraltar.

Customs regulations only allow one carton a day per person, although the groups of people sitting by the border, looking as if they are just whiling away the time, show that there is actually a constant flow of cigarettes.

Ever since Madrid decided to increase the controls on traffic in and out of Gibraltar, cross-border business has collapsed completely, with sharp drops in sales. The additional checks began over a week ago and have created lengthy traffic delays. Temperatures of up to 40 degrees C add to the discomfort.

“I thought I’d be spending the weekend with my family. But when I heard the news, I came here with several of my fellow union members to help those who are waiting in line,” Márquez told IPS.

Government sources in Gibraltar told IPS that 11,000 bottles of water had been distributed for relief from the heat. Several people, many of them elderly, had to be treated in nearby hospitals.

Hardest hit are the Spanish workers who cross the border daily.

“There is a fascist ideology in this country, and patriotism wins votes. That’s why no political party wants to solve the problem,” said Márquez, who has worked all his life in the Gibraltar shipyard.

Miguel Ángel Zoilo, wearing a security guard’s uniform, was insistent that this is “a smoke screen…This is a curtain dyed in patriotic colours, but it is divisive,” he said.

After talking to IPS, Zoilo set out on foot towards the border, avoiding potential traffic jams.

At least 7,000 people out of the 64,000 residents of La Línea de la Concepción go into Gibraltar every day to work in construction and services. The jobs are a lifeline for the town, where 11,000 people are unemployed.

The wages they earn on the Rock are vital for subsistence. Given the circumstances, Gibraltarians like Occa Harris are unable to understand Madrid’s position either. “It is stupid. They are hurting their own citizens,” she said, adding that Gibraltar will “never” belong to Spain.

“Llanitos” are easily identified by their speech, in which they mix Spanish and English.

Even the police forces have taken up the theory that the conflict is a strategy to create distraction. “They are diverting attention, but this has to have a political solution,” José González, organising secretary of the police trade union, SUP, for the province of Cádiz, told IPS.

The SUP held a rally at the border on Wednesday Aug. 7 to protest against pressures brought to bear by Gibraltar, where a web page published photographs of the police officers who work at the border control post.

In contrast, fisherfolk are probably one of the few communities that have closed ranks with the Spanish government.

Leoncio Fernández, a member of the Fishermen’s Guild in La Línea de la Concepción, expressed his support for Madrid’s decisions and called for Gibraltar to remove the concrete blocks.

Meanwhile, the principal victims of the escalating row, like Márquez, are calling for dialogue involving all of the concerned parties.
.