MÁLAGA, Spain, Jan 28 2013 (IPS) - “That’s where I sleep,” says Fernando, indicating a puddled area under a bridge. A 62-year-old Portuguese citizen, he has lived in Spain for 15 years, and he is part of the growing number of homeless people in this country wracked by a merciless economic and financial crisis. 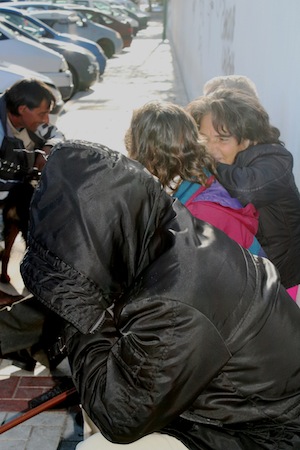 Homeless people share experiences near a shelter in Málaga, Spain

In 2008, there were 11,844 homeless people in Spain, but by 2012 the number had risen to 22,238, according to the National Institute of Statistics (INE), which only counts people who have used homeless shelters, meaning the real number could well be higher.

Fernando*, a man wearing a full beard, walks slowly, pulling a small red cart containing two boxes of wine and a nearly empty bottle of water. He does not want to live in a hostel for the homeless, in spite of having bad legs and the weather being very cold.

He is divorced and has grown-up children. He begs from customers at the two big shopping centres in the southern city of Málaga, where people’s life stories mirror those in other Spanish cities.

The reasons people end up on the streets are myriad. Forty-five percent say they lost their jobs; 26 percent say they could not afford to continue to pay their rent; 20.9 percent broke up with their partners and 12.1 percent were evicted from their homes, according to an INE survey published last December.

“The crisis hasn’t affected people who were already homeless, but instead those who were just keeping their heads above water and have now gone under,” Rosa Martínez, the head of the municipal reception centre for the homeless, told IPS.

Previously these people had managed to keep going, but when they were battered by the crisis, their family support networks fell apart, she said.

Martínez, who runs the 108-bed centre, says that in recent years the number of homeless people has grown and their profile has changed. “Now we are seeing entire families on the streets, people who are unable to pay the rent,” she says.

“We are seeing an increase in families, mostly single-parent families (women with children) who come to our network asking for some kind of help,” says a report by Puerta Única, a public agency coordinating care for homeless people in a diversified network of centres in Málaga.

The unemployment rate in Spain is just over 25 percent of the economically active population, and half of the youth. This month international bodies have forecast that the country’s economy will be even worse off this year than in 2012.

In the face of the crisis, the government of rightwing Prime Minister Mariano Rajoy has applied severe budget cuts, but it is difficult to draw a national portrait of how these measures have affected care services for homeless people.

Central government funds are spent through accords with the country’s different local governments. In some provinces (autonomous communities) “the administration is firmly committed while in others, there are difficulties”, sources at Caritas, a Catholic church body that is a leader in providing care for the socially excluded, told IPS.

“There will be no downsizing of funds in Málaga this year,” Martínez said.

According to INE, nearly 46 percent of homeless people are foreigners, like Hans, a burly German who can barely mumble a few words of Spanish.

Another case is a 51-year-old Latin American who prefers to remain anonymous. He is trying to escape a history of alcohol addiction and accusations of abusing his spouse, as a result of which he was forced into the shelter where he now sleeps, in spite of having studied at university and following, for a while, a professional career.

INE statistics show that 11.8 percent of homeless people have some higher education and 60.3 percent have secondary schooling.

Many homeless foreigners, especially those originally from Morocco, went back to their own countries because of the precarious employment situation, Paula de Santos, a social worker at the municipal reception centre, told IPS. “They can’t find jobs picking olives and strawberries, as they did before,” she said.

A large proportion are people with alcohol and drug problems, but some people are not addicts; they have just been unemployed for a long time and their unemployment benefits have run out, says Martín, as he is taken around the streets in a white van by his driver, Pepe, looking for what they affectionately call their “guys and gals”.

Martín persuaded Dolores, a 61-year-old woman, to go and live in the shelter where she now sleeps and gets three meals a day.

She left her partner who abused her and shared her addiction to alcohol. “I had a shower all by myself, holding on to the tap, because sometimes I get dizzy,” she told IPS, beaming with pride, a smile lighting up her lined face.

Thirty-two percent of people who were homeless in 2012 lost their homes that same year, while 44.5 percent had been homeless for over three years, according to INE.

“Some people have made living on the streets their way of life. It has become a chronic situation; they survive this way, and it is hard for them to change their lifestyle,” said Martínez.

When it comes to these people who find living a normal life difficult, “We try at least to ensure that they maintain minimum standards of hygiene,” Martín said.

People who became homeless most recently make the most use of social services, Martínez said. For instance, Jesús, who served a 10-year prison sentence, told IPS outside the shelter where he sleeps that he has been on the streets since he was released on Dec. 27.

Homeless people are a mobile population, and this also works against them, because a fixed address is required for receiving some benefits. “Sometimes we let them register at the municipal reception centre,” said de Santos.

* Surnames of some sources have been omitted in this article.