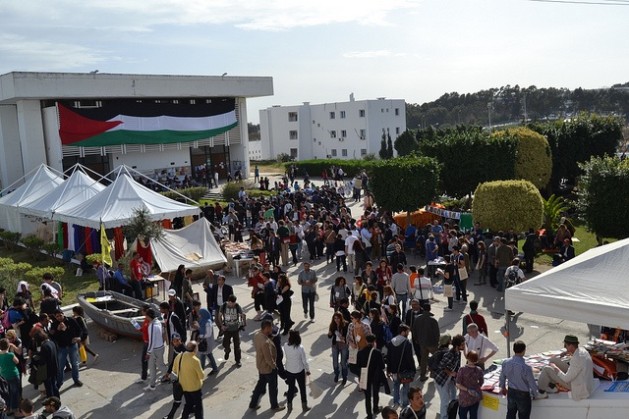 Booths and stands at the World Social Forum on the El Manar campus in Tunis. Credit: Alberto Pradilla/IPS

TUNIS, Mar 29 2013 (IPS) - The World Social Forum’s traditional focus on economic, political and social injustice caused by globalisation shifted towards the revolts and unrest of the Arab Spring, in the current edition of the global gathering in Tunisia.

The WSF “contributed in Latin America to the construction of governments that are with the popular classes. We hope that will also happen in the Arab world,” said Tarek Ben Hiba, a human rights activist in Tunisia and France.

He was referring to the Tunisian left’s expectations with respect to the 12th annual WSF taking place Mar. 26-30 in the capital, Tunis, where demonstrations forced President Zine El Abidine Ben Ali from power in January 2011.

The WSF got its start in the southern Brazilian city of Porto Alegre in 2001, drawing together hundreds of NGOs and movements critical of the direction taken by the globalisation process.

The 2013 WSF was organised in Tunisia, the cradle of the Arab revolts, to express support for the processes of change triggered by the December 2010 self-immolation of Mohamed Bouazizi, an impoverished fruit vendor whose desperate last act sparked the Tunisian revolution and, ultimately, the ongoing Arab Spring.

The first WSF edition hosted by an Arab country has become a reflection of the achievements and pending challenges in Tunisia, Egypt, Libya and Syria, and of the contradictions and unresolved clashing visions.

On one hand is the broad conflict between secularists and Islamists, especially in Tunisia and Egypt. And on the other is the war raging in Syria and the uncertainty and instability in Libya.

The conflict in Syria has been one of the main sources of tension in the WSF workshops and panels held this week across the Tunis El Manar University campus.

Supporters and opponents of Syrian President Bashar al-Assad have been sharing space on a campus that has been turned into an encampment of heterogeneous global struggles.

On Thursday, for example, while four Syrian communist and two Kurd organisations discussed future action against the regime, supporters of al-Assad held a rally in the central square. The two groups did not cross paths, so no confrontation took place, but the tension was palpable.

Participants in the debate held by the Syrian communists and Kurds told IPS that they had agreed on a document recognising the importance of the individual and collective rights of all ethnic groups in Syria, which is especially significant for the Kurds, the largest minority.

They also agreed to hold a day of solidarity with the Syrian uprising, in the first week of May.

The sources said a congress was being planned for June, to bring together “the Syrian, European and Latin American internationalist left” to coordinate support for the revolt.

The situation in Libya has been another source of tension. On Wednesday, two groups clashed when one of them tried to hold up a sign in support of Muammar Gaddafi (who governed the country from 1969 to October 2011, when he was captured and killed by rebel forces).

That provoked a reaction by supporters of the uprising, who have several stands at the WSF, where the revolution’s tricolour flag and the flag of the nomadic Berber or Amazigh people can be seen.

“We are better off than they are saying,” Fatma, a woman from Tripoli who belongs to an organisation fighting for women’s participation in political life, told IPS. “There are problems, but we are learning from scratch, because there was no civil society before.”

The disputes between Islamists and secularists that are heating up the political processes in Tunisia and Egypt have also been reflected at this week’s WSF.

One of the novel aspects with respect to previous WSF sessions is the presence of organisations with ties to mosques, in booths on campus as well as specific protests.

For example, for over a month, female university students have staged a sit-in on campus to protest university regulations that prohibit the niqab – the full Muslim veil that only shows the eyes. Muslim students argue that the ban violates their freedom of religion.

The protests are occurring in a climate of growing clashes since the assassination of leftist politician Shokri Belaid in February.

“The participants in the Forum are demanding freedom, which is why we’re asking for your support,” said Nabi Wahbi, one of the young demonstrators taking part in the pro-niqab protest.

The integration of these groups in an environment marked by the struggle for women’s rights is a challenge for these gatherings.

Progressive groups in Tunisia accuse Islamists of trying to impose Sharia, or Islamic law, and of undermining the rights of women.

But the Arab revolutionary processes are not the only challenge facing this week’s WSF. There are also deeply-rooted nationalist conflicts.

The central ones involve Palestine and the Western Sahara. But while Palestine is the main cause espoused by several delegations, the Sahrawis are facing off with the enormous delegation from Morocco, who tried to discredit the demands for independence of the inhabitants of the former Spanish colony.

“The Polisario Front is lying,” read a sign referring to the political movement leading the struggle for the independence of Western Sahara, proclaimed the Sahrawi Arab Democratic Republic in 1976 by the independence fighters.

Moroccan activist Benis Ghitah complained about the Sahrawi refugees, who have been living for decades in remote camps in southwest Algeria.

But the Sahrawis combat the campaign against them. “Morocco tries to confuse people,” Dih Naocha told IPS, who expressed fears because this was the first time representatives of the Sahrawi people had come to Tunisia to defend their rights.

The change of region by the WSF also involved a shift in focus. But it is also true that, as Ben Hiba indicated, the WSF sessions in the first decade of the 21st century served as support for emancipatory processes in Latin America – something that the revolutionary Arab forces hope to repeat with this week’s event.

Bloggers, human rights groups and activists of different stripes have had a chance to meet face to face. Time will reveal the results.