TUNIS, Oct 21 2011 (IPS) - Violent and increasingly common protests organised by far right Islamists are shocking and dividing the nation, and potentially threatening stability in the birthplace of the Arab spring. 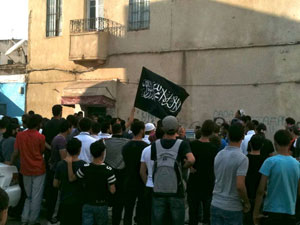 A small but militant faction of radical Islamists known as Salifis (or Salifists) are not expected to make much impact in the upcoming election Oct. 23. However since the January revolution they have seized the attention of their fellow Tunisians by organising a series of high profile mob attacks on brothels, bars, TV stations and universities.

These attacks have been condemned by most political parties, including the main Islamist party, Hizb Ennahda.

The former regime, led by strongman Zine Abadine Ben Ali, was corrupt and cracked down harshly on any dissent. However, it was widely praised by the west for its commitment to secularism. Many of the Salifi attacks have been launched on symbols of the old regime and its cultural attitudes.

Brothels and bars, both of which are legal here, have been attacked, and recently a university in the coastal city Sousse was attacked after a female student was told she couldn’t attend while wearing a niqab (full face veil). Ben Ali’s regime banned women wearing the more common hijab to university. The order on the hijab, that covers the head, was quickly reversed after the revolution, but the niqab which covers the face, has remained prohibited.

The most high-profile series of attacks followed an Oct. 7 screening of the cartoon Persepolis by the local TV station Nessma TV. The cartoon at one point portrays god as a bearded old man. Any physical depiction of god is seen as offensive by Muslims.

Adding to the controversy, Nessma TV is seen by many as close to the unpopular interim government, making it distrusted in many circles.

The screening of this cartoon is widely seen as offensive here, and initially peaceful protests against Nessma gathered thousands of mainstream Tunisians, both the day after the initial screening and last Friday.

However, despite the generally peaceful tenor of the initial, broad-based protests, they were both immediately followed by related mob attacks on Nessma offices and personnel.

The station chief of Nessma, Nabil Karoui was at the station at the time of the initial attacks, and later was attacked in his home along with his wife and children.

“(Nessma TV) expected a backlash….but this time we were worried because people were calling on other people to kill us and burn the building,” Karoui told IPS. Karoui and many other Tunisians see the attacks as deeply worrying. “Nessma is not (the only one) targeted… they are also targeting freedom of the press,” Karoui added.

Last Friday morning a large, mainly peaceful protest rally was taken out on one of Tunis’s main thoroughfares to protest Nessma’s broadcast and to call for implementation of Islamic law. This protest eventually reached the government offices and was broken up by police with tear gas. Later that afternoon a large group of young men and teenage boys began to gather and walk towards Nessma, shouting slogans.

Unlike the demonstration earlier in the day this group was exclusively made up of young men. Many of the demonstrators had pre-emptively armed themselves with sticks and stones long before police showed up. They also physically threatened anyone with a camera, and threw stones at people trying to take pictures of them.

The group grew in size and eventually reached a few blocks from Nesma offices where they clashed with riot police and were dispersed.

This riot and demonstrations like it are generally blamed on a small faction of local Salifis. Along with extreme political and religious views, Salifis separate themselves from more moderate Islamists with their long, unkempt beards and their traditional Arabic clothing. While people fitting this description were certainly present at the riot, many of the demonstrators were wearing more typical, western style clothes, suggesting perhaps that these protests have a broader base.

It is generally assumed that the radical beliefs advocated by the Salifis don’t have much popular support in Tunisia, so this recent outburst of violence has taken people here by surprise.

Many Tunisians see a hidden hand in this latest unrest, and conspiracy theories abound on who is actually behind it.

Hizb Ennahda, the main Islamist party in Tunisia, has remained officially neutral in the latest controversy, with a member of the Ennahda political office telling IPS, “we are against both the protesters and Nessma.”

While certain Islamist rioters may plan to vote for Ennahda, they don’t represent Ennahda’s base. Furthermore, Ennahda has lately been trying to emphasise their reputation as moderates in order to broaden their appeal, and stand to lose more from such unrest than any other political party.

While Tunisians opposed to Ennahda seek to blame them for the violence, others have accused members of the former security forces close to the old regime of secretly helping organise these riots in order to discredit Ennahda and destabilise the new democracy.

Despite the relatively widespread acceptance of both these theories here, neither has been supported by any substantive evidence.

Conspiracy theories notwithstanding, last weekend’s turmoil is revealing. First, despite Tunisia’s reputation for moderation and secularism, it is becoming increasingly clear that all shades of Islamism have significant popular support here. Both the non-violent and violent Islamist protests were extremely large, and dwarfed counter-demonstrations that took place later in the week.

Furthermore, while there were Salifis at the riot, many of the young men involved were dressed in the jeans and hooded sweatshirts that are favored by most young people here. These youths seemed to be less religiously motivated and more violent then the Salifis and were chanting anti-police slogans along with religious ones.

This reflects the fact that many of the Tunisians who were disenfranchised under the old system still feel left out. Despite a large drive for voter registration here, turnout for the Oct. 23 election is expected to be relatively low.

Many Tunisians, especially poor, young people seem to be forsaking the ballot box and instead are turning to the streets. As a Tunisian journalist told IPS after the first riots, “These (disenfranchised) kids, they hate the police, they see them and they want to fight them. If someone is fighting the police, Salifis whoever, (the disenfranchised youth) will be on their side.”