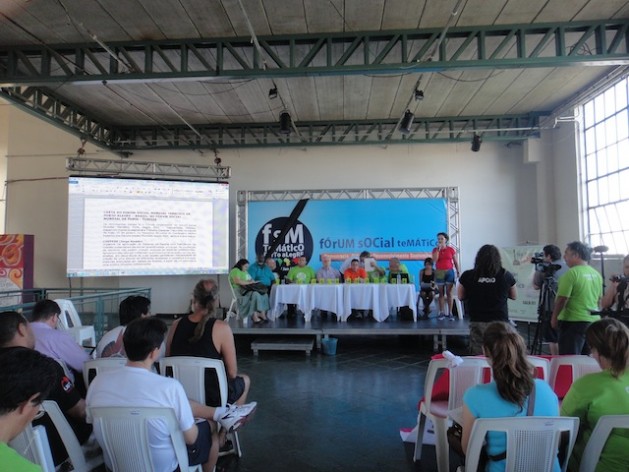 Participants at a debate during the Thematic Social Forum in Porto Alegre, Brazil in January. Credit: Clarinha Glock/IPS

PORTO ALEGRE, Brazil, Feb 5 2013 (IPS) - The tragedy at the Kiss nightclub cast a dark shadow on proceedings at the Thematic Social Forum held in Porto Alegre, the southern Brazilian city renowned for hosting the first World Social Forum in 2001.

People around the world were deeply shaken by the deaths of hundreds of young people who perished in a fire at the Kiss nightclub, located in the university city of Santa Maria, 292 kilometres from Porto Alegre, early on Jan. 27.

By Friday Feb. 1, 236 fatalities had been confirmed, while dozens of young people remained in critical condition. The fire was apparently caused by negligence and a series of errors on the part of the club’s management and the band.

The organising committeee of the Thematic Social Forum (TSF), held Jan. 26-31, immediately cancelled the cultural events that had been planned, but decided to go ahead with the debates on this year’s overall themes: democracy, cities, sustainable development and decent work.

The World Social Forum (WSF) is the largest global meeting for open debate for thousands of civil society groups and organisations, whose common denominator is criticism of the ethos and effects of capitalist globalisation.

A few days before the TSF, Brazil’s foremost trade union confederation, the Central Única dos Trabalhadores (CUT), and the World March of Women announced they would not be participating in the debates, in protest of what they called the “institutionalisation” of the forum by the Porto Alegre local government, which passed a law providing for the WSF to be held annually.

Another criticism was aimed at the participation of “right-wing” organisations, such as representatives of the business community and religious groups.

Perhaps because of the criticisms, the cancellation of the entertainment or the sobering effects of the tragedy in Santa Maria, expectations that 40,000 people would come to Porto Alegre were not fulfilled.

According to Cícero Pereira da Silva, a delegate from the União Geral de Trabalhadores (UGT) and one of the coordinators of the group debating the world of work, 15,000 people registered as participants, including visitors from Latin American countries, Europe and the United States.

The “Carta de Porto Alegre“, which documents the conclusions and proposals of the TSF, will be presented in March to the International Council of the WSF, which will be held in Tunis, the capital of Tunisia.

With regards to the world of work, “We decided on uncompromising struggle for human rights and quality of life in big cities,” Pereira da Silva told IPS. “We had a major debate on decent work, which was always one of the overarching issues at the International Labour Organisation (ILO), and we focused a great deal on the tragedy in Santa Maria. We blame the authorities for lack of regulation and oversight,” he said.

Regarding health issues, the Movimento Saúde +10 — a movement of professional medical organisations, university bodies, trade unions and religious groups — proposed collecting 1.5 million signatures in support of a bill that would allocate 10 percent of the federal budget for healthcare.

The Carta de Porto Alegre also emphasises the need for a new ethic, for education and for preservation of traditional farming techniques.

The group that participated in discussions about racial equality condemned religious intolerance, violence against women and the absence of local government plans to increase participation by the Afro-descendant population.

José Antônio dos Santos da Silva, coordinator of the Fórum Permanente de Educação e Diversidade Etnicorracial (Permanent Forum on Ethno-Racial Education and Diversity) for the state of Rio Grande do Sul, mourned the nightclub deaths and, simultaneously, recalled that many young black people are murdered every day in this country of nearly 200 million people. However, the press does not publicise these facts, he said.

“The lack of employment opportunities for young black people and their co-option into drug trafficking (schemes) are alarming,” Silva told IPS. “This strengthens our demand for a quota policy in public education. Violence indices show that seven out of 10 young people who are killed are black, and 90 percent of them live in the shanty towns” surrounding cities.

At the same time as the TSF was being held, social activists were meeting in the southern city of São Paulo for the “Dialogue toward the World Social Forum” organised by the Group of Reflection and Support for the WSF Process.

Messaoud Romdhani, one of the organisers of the Tunis WSF, was optimistic about the gathering — in spite of the uncertainties and tensions currently plaguing his country, the cradle of the popular movements that shook the Middle East and North Africa two years ago, which the press dubbed the “Arab Spring”.

“We want them to see the situation in Tunisia and we hope they can help us get over the transition that has been very difficult, because the government has so far not shown any interest in (fostering) democracy and guaranteeing human rights,” Romdhani told IPS.

After the uprising that overthrew dictator Zine El Abidine Ben Ali in January 2011, there was a series of reforms in Tunisia including the election of a constituent assembly to write the constitution, and the formation of a provisional government, in which the moderate Islamist Ennahda Party holds a majority.

But Romdhani maintained that “the practices of the old regime persist, and there are threats from the religious party that dominates the government.”

The activist fears a lurch towards Islamist extremism, hence the importance of maintaining the struggles for gender equality and freedom of expression. “The WSF will help us to attract attention towards Tunisia and it will supply fuel and solidarity for these struggles,” he said.

According to Romdhani, the Tunisian authorities have not put any restrictions in the way of the WSF, “perhaps because they want to show the international media that the government is behaving properly.”

The Arab Spring — mass protests in which people demonstrated for freedom, dignity and equality — sparked a dream, he said. “We who had fought for all this for such a long time became aware that overthrowing a dictator is much easier than (instituting) a democracy.