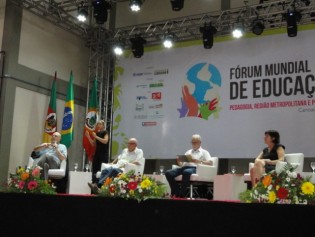 By Clarinha Glock
Indigenous communities in remote areas of Brazil have begun to recognise that they have the right to not be hungry, and are learning that food security means much more than simply having food on the table.

By Clarinha Glock
A new social contract is needed in education, that would fully incorporate informatics and the 21st century conception of human rights, French professor Divina Frau-Meigs says in this interview with IPS.

By Clarinha Glock
March will be a key month for defining the future of the Inter-American human rights system, which has come under fire from a number of countries in the region.

By Clarinha Glock
Today, in the 21st century, there are still tens of thousands of Brazilians subjected to slave-like working conditions. Last year alone, 2,501 workers were freed from this situation by Ministry of Labour inspectors.

By Clarinha Glock
Announced as an innovative way to encourage the participation of Internet users and the public in general in the debates at Rio+20, the proposal for Sustainable Development Dialogues also raised doubts about the impact its recommendations would have.

By Clarinha Glock
Decent work is an essential requirement for sustainable development, the central theme of the Rio+20 summit, taking place in a country where slave labor has yet to be eradicated.

By Clarinha Glock
In this southern Brazilian city that has an international reputation as a pioneer in environmental policies and citizen participation, the city government has set an eviction date for the small protest movement that is occupying the central square.

By Clarinha Glock
Activists gathered in Brazil from around the world doubt the political will of governments to attack the root causes of the environmental crisis, and demand drastic changes in the system of production and consumption.

By Clarinha Glock
Even before he was hired as spokesman for the Wikileaks whistleblower web site in July 2010, 49-year-old investigative journalist Kristinn Hrafnsson realised that the new initiative would have the power to bring about transformations simply by informing society, starting in his own country, Iceland.

By Clarinha Glock
José Luiz Ferreira, 60, was born poor and is still poor, but was able to get an education. Known as Seu Luiz (Mr. Luiz) in Vila Nova Chocolatão, the Porto Alegre neighborhood where he lives, he earns a meager living by giving English classes. And he sees eagles where everyone else sees chickens.

By Clarinha Glock
The adoption of a new Forest Code in Brazil could threaten efforts to curb Amazon deforestation, which was reduced 70 percent between 2004 and 2010.

By Clarinha Glock
In Panama's largest cities, minors under 18 not under supervision of an adult must be off the streets after 9:00 p.m. The juvenile curfew law means some spend several days behind bars until someone shows up to pay the fine.

By Clarinha Glock
In the weeks since a motorist mowed down dozens of cyclists in the southern Brazilian city of Porto Alegre, the incident has becoming a rallying flag in the fight to create a more bike-friendly city.

By Clarinha Glock
A motorist’s attack on a group of cyclists in Porto Alegre has drawn local and international attention to the cause of bicycles as a mainstream means of transportation.
Next Page »
ADVERTISEMENT ADVERTISEMENT