PANAMA CITY, May 12 2011 (IPS) - In Panama’s largest cities, minors under 18 not under supervision of an adult must be off the streets after 9:00 p.m. The juvenile curfew law means some spend several days behind bars until someone shows up to pay the fine. 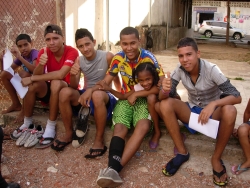 Until the curfew was put in place in 2009, youngsters in neighbourhoods like Santa Ana in Panama City, on the Pacific coast, and Norte, in the Caribbean coast city of Colón, could hardly cross the street without the risk of falling into gang violence.

When the Panamanian Red Cross launched a youth violence prevention programme in urban and semi-urban areas in 2008, adolescents in those neighbourhoods began to share plans and activities, and learn to confront preconceptions and create opportunities to realise their dreams.

The programme offers a way to recover the ability to dream. “I like the project because it’s fun,” says 15-year-old José Meneses, who lives in Santa Ana. “I want to do lots of things in the future. Maybe leave the country and visit Costa Rica or Nicaragua.”

The project forms part of the Regional Strategy for Violence Prevention – Central America, Mexico and the Caribbean, designed by the Spanish Red Cross and the International Federation of Red Cross and Red Crescent Societies.

Between 2008 and 2012, the team members involved in the project aim to work with just under 3,000 youngsters between the ages of 14 and 21 in eight countries of Central America and the Caribbean: Costa Rica, the Dominican Republic, El Salvador, Guatemala, Haiti, Honduras, Nicaragua and Panama.

Of that group, 304 will be selected to receive personalised educational support with the aim of nurturing their leadership skills and their ability to influence public policies that affect young people.

The requisites for eligibility for the educational opportunity are: no weapons, no drug use and no criminal record. The focus is on young people who live in violence-stricken areas but have not been recruited by youth gangs, known as “maras” in Central America.

The team members go to the young people’s communities and help them fill their free time with educational but fun activities, taking back the streets as public spaces where people can relax, gather and participate in the community.

In the meetings, rights and duties – like going back to school – are discussed, and the young participants feel listened to and cared about.

The effort has the support of the Spanish Agency for International Development Cooperation (AECID).

The problems facing young people in poor neighbourhoods on the outskirts of big cities are similar throughout Central America: family breakdown, poverty, unemployment, limited activities to occupy their free time, and discrimination.

That image is so entrenched that when the members of the Red Cross started the project in Panama, they had to change its name from “violence prevention” to “promoting positive youth leadership”. And for security reasons, they called it “promotion of values” in Guatemala, Honduras and El Salvador, three of the most violent countries in the world.

In Panama the homicide rate is 21 per 100,000 population, far below the murder rates of Honduras, El Salvador and Guatemala, which make up the so-called “Northern Triangle” of Central America.

According to the World Health Organisation, any country with a murder rate above 10 per 100,000 population is suffering an epidemic of violence.

Panamanian Red Cross project coordinator Yasmín Ortiz told IPS that at the beginning of the programme, 24 young people signed up. Today there are more than 100 participants in the capital, and a similar number in Colón. The waiting list is long: if all of the interested young people were accepted, the number of participants would be twice that.

“The good thing is that there are young people who understand that, in order to be accepted in the project, they have to behave. A culture of ‘if I want to get something, I have to act appropriately’ is starting to be built,” Ortiz said.

“But we are worried about when the project ends, in 2012,” she added. The Red Cross is seeking funds to extend the programme, and the biggest challenge is to train the participants so they can continue on their own.

Besides taking part in discussion meetings and festive and sports activities, the participating young people keep in daily contact with the team through social networking tools like Skype or Facebook.

The virtual contact serves as an escape valve, since youngsters under 18 are not allowed to be out on the street on their own after 9:00 p.m. in Panama City, in San Miguelito, to the north of the capital, and in Colón.

Those who break the curfew, especially in violent neighbourhoods, are taken into custody, and their parents must pay a fine ranging from 10 to 25 dollars to release them. “Sometimes they’re held for several days because no one shows up to rescue them,” Ortiz said.

Youngsters in Central America’s vast shantytowns suffer double neglect: at home because they often live with only one parent or with an aunt or a grandmother, and outside of the home due to the lack of opportunities. They often work selling trinkets at stoplights, after dropping out of school at a young age to help support their families.

In Santa Ana, the Red Cross offices are across the street from the Panamanian Sports Institute stadium, which locks its gate at 4:00 p.m., just when students are getting out of school and have free time for games and sports.

But local young people have found a way to get in. A house next to the stadium was demolished, and they enter the grounds through the empty lot. Every afternoon the sports field fills up with adolescents playing football and baseball.

To get in, they risk being scratched or cut by the twisted steel rebar at the demolition site, or plummeting behind the stands. But the authorities have apparently failed to notice what is going on.

Among the teenagers are 18-year-old Eric Rodríguez, 19-year-old Richard Loaiza, and 15-year-old Francisco Kassil – all potential leaders. Breathless and sweating after the game, they talk about the raffle they are holding to finance a camping trip. It’s the first time they have ever organised anything like this, and they’re excited.

Edwin González, 17, says he changed after joining the group. “I was rude and didn’t socialise,” he says. Now he likes to give his opinions in the meetings.

Charlie Linares, 28, who is in charge of organising the football teams, says the changes have not only been seen in the youngsters themselves – the community also looks at them differently now. He watched them grow up with the stigma of being seen as rebellious delinquents up to no good on street corners, and now he notices the difference in their behaviour.

In their neighbourhoods, the youngsters are hemmed in by drug dealing and gun sales. Domestic violence is frequently a normal aspect of their lives. But in the group meetings, they are welcomed with hugs and smiles.

Daniel González, one of the project team members, stresses how important it is for the participants that no one shouts at them or puts them down in the project.

“In this work, the team member has to be convinced that change is possible. And the kids can tell if you really want them to change,” Ortiz said.