SÃO PAULO, Jul 14 2011 (IPS) - Even before he was hired as spokesman for the Wikileaks whistleblower web site in July 2010, 49-year-old investigative journalist Kristinn Hrafnsson realised that the new initiative would have the power to bring about transformations simply by informing society, starting in his own country, Iceland. 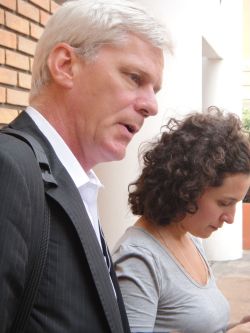 It was in 2009, while Hrafnsson and other reporters in Iceland were running up against resistance to their attempt to obtain and disclose news on the “banksters” who caused the financial crisis there, that he received the first cable from Wikileaks, a non-profit media organisation that publishes confidential documents from anonymous sources and leaks.

Wikileaks and its founder, Julian Assange from Australia, provided a list of all those involved in the Iceland banking scandal. Hrafnsson said that jolted journalists in Iceland awake, and showed them the importance of what Wikileaks was doing.

Today he is the public face of the “Wikileaks phenomenon” in the numerous countries where the organisation is forging alliances, while Assange remains under house arrest in Britain, awaiting the results of his appeal not to be extradited to Sweden, where prosecutors want to question him about sexual assault allegations.

In Hrafnsson’s view, above and beyond the initial shock caused by some of the revelations in the thousands of secret documents it published, a full assessment of the impact of Wikileaks’ work will only be possible a few years down the road.

At the Congress, Hrafnsson announced the release of nearly 3,000 U.S. government documents relating to Brazil, including 63 State Department cables to U.S. diplomats in Brazil, and 2,919 cables sent to Washington between 2002 and 2010 from the U.S. embassy in Brasilia and the U.S. consulates in São Paulo, Río de Janeiro in the southeast, and Recife in the northeast.

Published Jul. 11 on the Wikileaks web site and in June on the web site of its associate in Brazil, the Pública investigative journalism agency, the documents are just a few of the 251,287 U.S. cables leaked by Wikileaks starting on Nov. 28, 2010.

Wikileaks challenged the mainstream media and emboldened reporters, who started asking tough questions again, Hrafnsson said at the Congress. For the first time in years, different media outlets worked together in a collaborative fashion, sharing and republishing information, he said, pointing out that there are now more than 70 outlets analysing the leaked documents.

After his presentation, Hrafnsson responded to several questions from IPS:

Q: How can you measure the impact of Wikileaks’ release of confidential documents around the world? A: There was always the knowledge that the impact would be great when we knew the material was in hand. It was hard to say what kind of impact it would have, how it would materialise, but it was extremely important to see that the information that we released had a dramatic impact on what is happening in the Middle East, in the Arab Spring.

When the material came out in cables in Tunisia, in early December, the president (Zine El Abidine Ben Ali) was leading a very corrupt regime (since 1987). It wasn’t a surprise to anybody in Tunisia, they were already outraged by the situation there with lack of freedom and economic deprivation, while this corrupt government was living in ridiculous luxury.

But the extent of the corruption and nepotism shown in the cables infuriated the public even further and encouraged them to go out on the streets. It also had an impact, in my opinion, that they were seen from a foreign perspective, in a detailed report that was sent to the State Department. So they understood: “Well, they fully knew what kind of dictator we have, but they still support him!”

And the same thing applied in the case of Hosni Mubarak (1981-2011) in Egypt, and (the regime’s) torture chambers. It was not a Wikileaks revolution in Tunisia, it was far from that – it was the tragic fact that a university student set himself on fire in a protest, and died in January, and 10 days later the government of Tunisia fell.

But here was the thing: that people, when they unite, are not afraid anymore. They were organising through social networking channels on the Internet, and it was the first Internet revolution. And it spread to Egypt, to Yemen, to Syria. So we see the impact all over. And it is often underestimated. I sometimes say that this is as important as the fall of the Berlin Wall.

Q: Do you think that Wikileaks gives them support to continue their fight? A: Absolutely. And we saw that in Egypt as well, even when the United States tried to meddle further in the internal politics. Hosni Mubarak was in a very fragile situation – there was a situation where the U.S. was trying to push forward his replacement. We then released a cable showing that (the proposed replacement candidate) was basically a part of the control of the country.

Q: So how does Wikileaks contribute to all these changes? A: Overall, the general concept of giving people the information they have the right to, the historical records, is quite essential. We have been demystifying the diplomatic procedure. We have been giving the detailed picture of the war that was being carried out in secrecy.

It is a different thing now. We are encouraging a new ideal. Hopefully it will benefit people in this region as well as elsewhere. I cannot go into individual examples. It is hard to determine the causal relation and say for sure that “a” caused “b”. I won’t go that far. But overall you can see the effects.