The lack of prospects for Ticuna and Kokama indigenous youth in the far northwest of Brazil led to high rates of alcoholism and suicide. 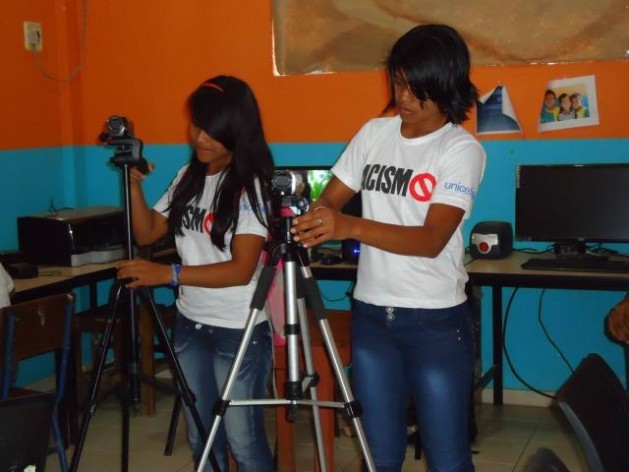 PORTO ALEGRE, Brazil, May 21 2013 (IPS) - Indigenous communities in remote areas of Brazil have begun to recognise that they have the right to not be hungry, and are learning that food security means much more than simply having food on the table.

Rosiléia Cruz, 19, dreams of studying journalism. She chooses her words carefully during her interview with Tierramérica* by mobile phone from Tabatinga, in northwest Brazil, which can only be reached by plane or river travel.

Cruz is a member of the Ticuna indigenous ethnic group, one of the most numerous in the country. The Ticuna live in the Brazilian Amazon rainforest, in the Alto Solimões region around the river of the same name, near the borders of Peru and Colombia.

The lands of their ancestors were invaded for decades by “seringueiros” (rubber tappers), fishermen and loggers, who left poverty and destruction in their wake.

Up until three years ago, young people like Cruz had few prospects, and many sought relief in alcohol and even suicide.

But in January 2010, the Joint Programme on Food and Nutrition Security for Indigenous Women and Children opened a window of hope, with activities aimed at creating agricultural and other nutritional solutions, but with particular emphasis on training and awareness raising.

Cruz forms part of a group of 50 young people from Ticuna and Kokama indigenous communities participating in communications workshops held in local schools. At the Umariaçu II community school in Tabatinga, she learned how to conduct interviews, take photographs, and produce daily news billboards and radio programmes.

She was thrilled by the opportunity to handle a microphone or camera in order to question the village chief about community problems, explain the importance of breastfeeding to mothers-to-be, or inform children about healthy habits, soft drinks, processed foods and the fruits of the region.

“There are a lot of young people that we can rescue from alcoholism,” she said. “We just prepared a news report on ‘Indian Day’ (a Brazilian holiday celebrated every Apr. 19) and I’m going to participate in Indigenous Babies Week.”

The aim of the workshops is to motivate young people to promote and defend their rights. An agreement with a local television station made it possible for the youngsters to be trained in the use of the equipment donated by the joint programme. The radio station in Tabatinga provided them with space in its Saturday programming schedule so that they could broadcast their own radio show.

The group also uses loudspeakers mounted on posts in their villages to get their message across. The daily news billboards are displayed on the walls of medical clinics and schools, and internet workshops have provided them with the skills to run their own website, which will be launched on May 21.

Once all the workshops are completed, the participants will share what they have learned with other students. Partnerships with local governments, universities and indigenous organisations will ensure continuity, and the internet will serve as a platform to disseminate the results, expand communication and inspire other young people.

These experiences form part of a wider project to help Ticuna and Kokama communities to organise in order to demand health care, education and economic and political participation.

The joint programme is an initiative of the Millennium Development Goal (MDG) Achievement Fund, set up with a financial contribution from the government of Spain and administered by various United Nations agencies, including the UN Food and Agriculture Organization (FAO), in partnership with the Brazilian government.

Now in the stage of collecting data and evaluating results, since it will conclude in June, the programme focused on the municipalities of Tabatinga, Benjamin Constant and São Paulo de Olivença in the northwestern state of Amazonas, and the municipality of Dourados in the southwestern state of Mato Grosso do Sul, which are home to a combined total of 53,000 indigenous people.

These areas were chosen because of their high rates of malnutrition, substance abuse and violence, as well as their remote and difficult-to-reach locations. It is hoped that the positive results expected can be extended to other regions of the country, Fernando Moretti, the national coordinator of the joint programme, told Tierramérica.

In the three and half years since the programme was launched, International Labour Organization (ILO) Convention 169 on indigenous and tribal peoples has been translated into the Guaraní, Terena and Ticuna languages. Brazil ratified the convention in 2002, but its implementation remains a challenge.

Another concrete outcome was the publication of a book that shares the perceptions of 25 children and adolescents in villages in Mato Grosso do Sol and neighbouring Paraguay on food and nutrition security. The book, which includes photographs, letters and artworks, will be distributed in a Portuguese-Guaraní bilingual edition to schools, libraries and cultural centres.

“When we talk about food security, it is not simply a matter of food production, but also of training in health and self-esteem,” said Moretti.

The activities are aimed at motivating people to use the region’s biological and agricultural diversity sustainably.

Communities were provided with rural technical assistance and guidance for the establishment of agro-forestry systems, which combine farming with sustainable use and recovery of local forests, and of school gardens. In Dourados, indigenous farmers reintroduced yerba mate – used to prepare a hot beverage widely consumed in southern Brazil and neighbouring countries – and other native plant species with significant commercial potential.

In the village of Panambizinho, two plant nurseries were constructed, and the local residents learned how to make eco-friendly stoves that use less firewood, thus preserving the forest, and reduce harmful smoke emissions.

There were also discussions of concepts and practices related to healthy eating and disease prevention. Awareness raising and the creation of opportunities allowed the project to grow naturally, said Moretti.

Some families created gardens in their homes. Indigenous community members were trained to measure and weigh babies and children in order to provide data on these populations to the Food and Nutrition Security System.

In Alto Solimões, the ILO is supporting an association of craftspeople with a market study to help their products reach buyers.

For Moretti, what was most important was strengthening institutions and expanding interaction with the indigenous population. From now on, there will be two indigenous representatives on the National Council for Food and Nutrition Security, the agency responsible for implementation of the Zero Hunger policy launched by the Luiz Inácio Lula da Silva administration (2003-2011). Indigenous community members are also organising to participate in municipal councils.

In Dourados, the National Indigenous Fund and UNICEF organised a colloquium in order to create a network for the protection of indigenous children and adolescents and to define the measures to be adopted in cases of abuse, abandonment and alcoholism. A similar event will be held with communities in Alto Solimões on Jun. 17-19.

An ethnic mapping exercise was also conducted, which included the identification of what is produced in each region. “These are tools that the indigenous people themselves will be able to use,” stressed Moretti.