MEXICO CITY, Oct 14 2009 (IPS) - Mexico is about to become the first Latin American country with an indigenous chamber of business, dedicated to promoting and representing more than one million micro and small enterprises that are on the frontline in the fight against poverty. 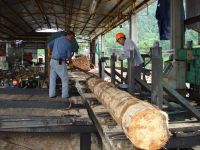 Residents of four municipalities in the southern Mexican state of Puebla in 2005 formed the Totaltikpak Alternative Tourism Network of small, community-based companies that offer environmental, adventure and rural tours, lodging and food in the Sierra Norte region in the northeast of the state.

“Our main objective was to integrate the products of different enterprises. It has been a good initiative because we have been able to disseminate otherwise unknown projects that the members, working on their own, would not be able to carry out,” Misael Morales, secretary of Totaltikpak (which means “our land” in the Náhuatl language), told Tierramérica.

This is one of the many indigenous enterprises that operate in Mexico, but which so far have not had a larger association that can act on their behalf.

That is why a group of investors drew up a plan to create the Indigenous Business Chamber of Mexico, which will be legally established in May 2010.

“It’s a very interesting challenge for us to be part of an initiative of this nature, with our own companies, then to see how these small initiatives draw in other members of the community itself, as partners or employees,” said the director of the Mexican Indigenous Tourism Network (RITA), Cecilio Solís, one of the promoters of the future chamber.

RITA itself was established in 2002. The workers in the 155 microenterprises that are members come from 17 indigenous communities with a presence in 15 of Mexico’s 32 states.

There are an estimated 1.2 million micro and small enterprises located in indigenous areas of Mexico, dedicated to an array of activities, from ecotourism to mining, but figures are not available about their contribution to the national economy.

Mexico is the Latin American country with the largest indigenous population in absolute numbers, which is variously estimated to make up between 12 and 30 percent of the country’s 107 million people (the smaller, official, estimate is based on the number of people who speak an indigenous language). The overwhelming majority of the Mexican population is of mixed indigenous and Spanish ancestry.

The indigenous business chamber has the backing of specialised institutions. The idea was presented at the eighth session of the United Nations Permanent Forum on Indigenous Issues, held May 18-29 in New York, by the International Indigenous Women’s Forum (IIWF) and the Mexico Multicultural Nation Programme of the public Autonomous National University of Mexico, which carries out research on native and Afro-Mexican people.

The IIWF is a network of indigenous leaders from the Americas, Asia and Africa, which emerged in 1995 out of the 4th World Conference on Women, in Beijing.

The Permanent Forum, made up of 16 independent experts, half named by governments and the other half by indigenous organisations, was established in 2000 and met for the first time in 2002 to study the challenges faced by native peoples and to recommend actions to the international community.

“We are convinced that what they are doing will bring about a fundamental change, in terms of participation in development by indigenous peoples. Right now it’s the tourism companies that are the best organised,” José del Val, director of Mexico Multicultural Nation, told Tierramérica.

The programme has begun work on a status report on indigenous enterprises, to determine how many there are, what they do, how many people they employ, and what difficulties they face. The inventory is slated for completion in two years and will serve as a basis for specific policies.

But already there are some results: many of these small businesses set themselves up as civil associations, and they often reinvest their earnings to improve technology and practices. There is also an explicit interest in the sustainable use of resources, and in skills training. However, there is an apparent lack of gender balance, as few women hold top positions.

Mexico’s indigenous business chamber will be the first of its kind in Latin America. In the southwestern U.S. state of New Mexico – bordering Mexico – Navajo Indians set up a similar body, and others exist in Canada and New Zealand.

In March, a Mexican delegation visited the Navajo to observe firsthand how their organisation operated.

“In Mexico we are taking on the challenge, not only in terms of the possibility of creating this, but also in how it will operate, because there are no instructions for how to do this,” said Solís.

“The change with respect to indigenous peoples is to consider them as project partners. In that way we all develop. If not, the only ones to develop are the rich, and the poor are forgotten. We want to see how these organised groups can improve their conditions,” said del Val.

Although government support is available for small and medium companies, there is no specific institution to which indigenous businesses and associations can apply.

“In the indigenous territories there are vast natural resources that for many decades have been exploited or used by foreign companies that come here and set up shop, and the region’s residents only supply labour,” said Solís.

The members of the Totaltikpak Alternative Tourism Network include, for example, six community enterprises that provide work to 70 people in the Puebla municipalities of Xochitlán, Zapotitlán, Cuetzalan and Tenampulco.

“One idea could be to set up business training centres in different regions, and for the companies themselves to build their own processes,” suggested del Val.