PORTO ALEGRE, Brazil, Feb 2 2012 (IPS) - Traditional social movements of homeless and landless people have for years been organising occupations as a pressure tactic. Now “occupying” is a key element for fighting the capitalist system in its hour of crisis, and also in the realm of virtual reality. 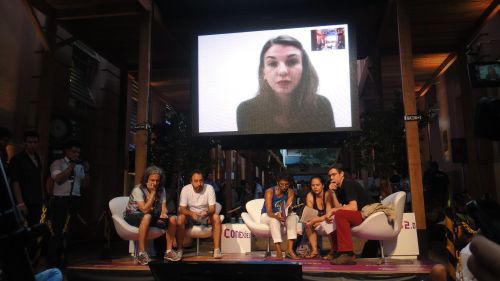 The FST was held Jan. 24-29 as a preparatory meeting for the June People’s Summit that will take place in Rio in June, in parallel with the United Nations Conference on Sustainable Development (Rio+20).

Meanwhile, at the Global Connections meeting in Porto Alegre, held within the framework of the FST, internet activists called for a campaign to block corporate web sites, as a form of virtual occupation.

The FST, an outgrowth of the World Social Forum, prompted discussion of modern forms of protest. Representatives of popular movements like the Arab Spring, Occupy Wall Street and the “Indignados” (Indignant) from Spain, the United States and the United Kingdom took part in the debate, in person or via the internet.

Two issues captured the most attention: What to do after the occupations? And how to get the new information technology tools into the hands of traditional social movements that do not yet have access to them?

In a video conference from the U.K., communicator and researcher Matheus Lock would not hazard a prediction on the future of the occupations. “At Occupy London, people were waiting around for political directions over Twitter,” he said.

“There is no leadership. There are discussion groups, and some real representatives. Even homeless people participate,” he added.

In the same discussion panel, Wilhelmina Trout of the World March of Women spoke of the difficulties of making the world aware of what goes on in sub-Saharan Africa, where most people do not have electricity, let alone access to internet.

Journalist Emiliano Bos, who has covered several conflicts in North Africa and the Middle East, recalled how one million people fled Libya last year and entered bordering countries like Egypt and Tunisia.

“We could follow the movement in city squares in Egypt, but we could not see the millions of people who were mobilising, off the radar of the news broadcasts, in refugee camps,” he said.

“These people are not represented, they do not protest, they do not occupy. The only means of expression they have is flight. All they hope for is a piece of paper that will let them out of there,” he said.

For his part, Moroccan national Hamouda Soubhi of the Maghreb Social Forum said, “Our struggles are the same, although we speak different languages.

“When the media announced that a revolution was happening in the Arab world, we were taken by surprise, because for many years we have been denouncing human rights violations and going to prison for it, but the West wanted to preserve the regime, for the sake of oil exports and exploiting raw materials,” he said.

“As far as we were concerned, this was not a revolution. It was only the right to have democracy, justice and freedom. We are at a historic crossroads with a great number of opportunities: Rio+20, the Maghreb Social Forum, The World Social Forum Free Palestine and young people’s movements in Europe and different parts of the world which are making change possible, not tomorrow, but today,” he added.

In the view of sociologist Sérgio Amadeu da Silveira, a professor at the Federal University of ABC in São Paulo who took part in the Global Connections discussions, change requires the construction of “interactive democracy”, not only participative democracy.

“Traditional social movements need to unite more closely with activists in the hacker culture and online,” he told IPS.

“That way it would be possible to construct a new public sphere that is interactive and interconnected and would act as another platform for formulating policy,” he added.

According to Silveira, “it is necessary to open up the ‘source code’ of power,” alluding to the lines of text instructing a computer to execute a given programme – access and understanding of which is synonymous with control.

Civil society has the capacity to force powerful corporations whose decisions can cause environmental, social and economic devastation to face up to their social responsibility, he said.

For instance, “Occupy Wall Street can make these large corporations pay the cost of the crisis. Political parties in general cannot do this, because they are financed by the very same companies,” said Silveira.

Meanwhile, French economist Gustave Massiah, speaking in the great hall of the Federal University of Rio Grande do Sul, said the crisis is social, geopolitical, ideological and ecological, and the challenge is to connect the new popular movements with the groups that are already fighting for global justice.

Occupy London activist Sam Halvorsen concurred, recognising that environmental issues had not so far been a central concern. “We’re thinking about how to link the problems arising from the crisis with climate change. It’s time we thought about forging those links.”

The more than 30 local and international organisations working at the FST meeting to formulate demands to be presented to the People’s Summit have already used the internet to disseminate their manifesto, although they know that more effort is needed in order to make a real difference.

The People’s Summit activities will start Jun. 5, World Environment Day, followed by workshops on “struggles, denunciations and connections” until Jun. 10; Jun. 15-16 are days reserved for discussion; then on Jun. 17 there will be a march to mark the opening of the Permanent People’s Assembly, which will be in session until Jun. 21.

A big march is being planned in Rio de Janeiro for Jun. 20, which the organisers hope will be replicated all over the country and in several world cities, in order to visibly occupy the streets.