PORTO ALEGRE, Jul 5 2011 (IPS) - José Luiz Ferreira, 60, was born poor and is still poor, but was able to get an education. Known as Seu Luiz (Mr. Luiz) in Vila Nova Chocolatão, the Porto Alegre neighborhood where he lives, he earns a meager living by giving English classes. And he sees eagles where everyone else sees chickens. 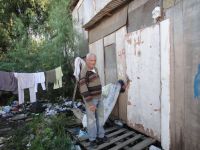 “Once upon a time, a scientist went on trip and came across a chicken coop with a bunch of baby eagles inside pecking corn like chickens. So he said to the owner, ‘Those aren’t chickens, they’re eagles.’ And the owner said, ‘No, they’re chickens, see for yourself.’ He opened the door to the coop but the birds just kept pecking. But the scientist stole one of them. And many months later, he took it to a really high place and let it go, and the chicken started to fly, and turned into an eagle,” recounted Seu Luiz.

His tale is a loose retelling of a story from the book “The Eagle and the Chicken” by Brazilian theologian and writer Leonardo Boff, one of the leading figures of Liberation Theology, a progressive current in the Latin American Catholic Church.

“Here (in the neighborhood), everyone has been an eagle for many years, but they treat them like chickens. And if nobody says anything to them, they will continue acting like chickens,” he said.

The eviction of the 732 residents of Vila Chocolatão, a favela or shantytown in the centre of Porto Alegre, became a landmark event in the city: for the first time ever, lawyers and geographers intervened in a forced relocation in order to ensure that potential problems were prevented or solved, based on the right to housing.

The result was the suspension of the resettlement until an agreement was signed with the federal public prosecutor’s office, which plans to construct a building for its own use on the site formerly occupied by Vila Chocolatão. The land in question is the property of the Federal Regional Court.

“Just because they live in decent housing doesn’t mean that they will have access to work, health care and education. A basic principle is that it is prohibited to set people back, and where they lived before they were able to earn a living,” Alexandre Gavronski, the regional prosecutor for Citizens’ Rights at the prosecutor’s office told Tierramérica.

Vila Nova Chocolatão – literally, the new Vila Chocolatão – is far from the city centre, and unlike its precursor, it is not surrounded by garbage. It has solidly built houses, sewers, electricity and running water. Employment is guaranteed for 60 people per shift at a waste separation facility donated by a private company; the inhabitants of the former favela made a living by collecting recyclable waste.

It would all be perfect if it didn’t violate the law, which not only requires that evictees be given a roof over their heads, but also the possibility of rebuilding their lives with work, health care, education and a minimum level of comfort.

The original Vila Chocolatão sat on the property of the Federal Regional Court for 25 years. It was overcrowded and living conditions were precarious and unhygienic; it was also struck by fire on several occasions. But two thirds of its inhabitants earned incomes equivalent to a minimum salary of around 342 dollars.

“The new neighborhood is infinitely better,” Humberto Goulart, director of the Porto Alegre Municipal Department of Housing, told Tierramérica a week before the relocation.

“The daycare centre (not completed at the time) is modern, there is enrollment space for all the children in the local schools, the health care facilities can respond to the new demand, and the waste separation facility is the most modern in Brazil,” he maintained. “Some people have complained just to make trouble.”

The criticisms, spearheaded by the Association of Brazilian Geographers and the University Legal Aid Service of the Federal University of Rio Grande do Sul, had stressed the limited participation of the inhabitants in the relocation plan, a violation of the city bylaws.

They also pointed out that the number of new homes was not sufficient to house all of the families, obliging the city government to guarantee that it would pay rent in another area for a portion of the inhabitants.

Criticisms were also leveled at the recycling facility, which is not large enough to provide employment for all of the people who used to earn a living collecting and recycling waste, and at the inadequate census conducted of the neighborhood’s families, which led to the construction of houses only suitable for small households.

“It wasn’t what I expected,” said Teresinha Margarete do Rosário, who spoke with Tierramérica in May, a week after the relocation, at the waste separation facility. She had only managed to find enrollment space for one of her six children at the nearest school.

But Antônio Lázaro da Silva de Oliveira, a construction worker, was happy with the move. “Life is totally different here. My three daughters are in school. But there is one thing: after nine o’clock at night, nobody leaves the house. I’m going to talk with the people to do something about making the neighborhood safer,” he commented to Tierramérica.

It took Marta Suzana Pinheiro Siqueira and her husband an entire year to build their home in the old neighborhood, but they had no choice but to accept their eviction. A month after the move, they are still waiting for the authorities to remedy the lack of space in their new home for their four children, aged 11 to 17, by moving them to a third location.

Although the Vila Chocolatão eviction is not linked to the preparations for the 2014 FIFA World Cup, all resettlements and urban reforms in Brazil today are ultimately connected to this purpose.

“Everything is connected to the World Cup, because it’s a way of making resources available,” Raquel Rolnik, an architect, urban planner and United Nations special rapporteur on the right to adequate housing, told Tierramérica.

Rolnik has received reports of forced evictions and relocations in different parts of the country in which people’s rights have been allegedly been trampled. One of these complaints was about Vila Chocolatão.

In December, Rolnik approached the Brazilian government to alert them to the allegations related to the construction of infrastructure for the World Cup. The lack of response led her to make the matter public through a press release.

In May, the head of the Special Secretariat for Human Rights of the Office of the President, Maria do Rosário Nunes, told Tierramérica in a telephone interview that the government had created a working group with members from the secretariat and a number of ministries to assess the resettlement plans of the local governments implicated in the allegations.

These plans are currently being evaluated, and federal authorities will continue to visit each place involved, said a source at the secretariat.

The mayor of Porto Alegre, José Fortunatti, claimed to be surprised by the complaints, and insisted that all rights were respected in the case of Vila Nova Chocolatão.

“If violations are repeated, there could be penalties,” Rolnik told Tierramérica.

At the time of publication, the Municipal Chamber of Río de Janeiro had just approved the creation of an inquiry commission to investigate reports of human rights violations related to construction works for the World Cup and the 2016 Olympic Games.

These works are one of three major national projects that are currently affecting the residents of favelas in this country of 190 million people. The other two are the Growth Acceleration Programme and a plan known as Minha Casa, Minha Vida (My House, My Life), explained geographer Lucimar Siqueira.

The solutions offered provide shelter and assistance for evictees, she noted. But they do not guarantee that eagles will be able to fly.