RIO DE JANEIRO, Jun 20 2012 (IPS) - Today, in the 21st century, there are still tens of thousands of Brazilians subjected to slave-like working conditions. Last year alone, 2,501 workers were freed from this situation by Ministry of Labour inspectors. 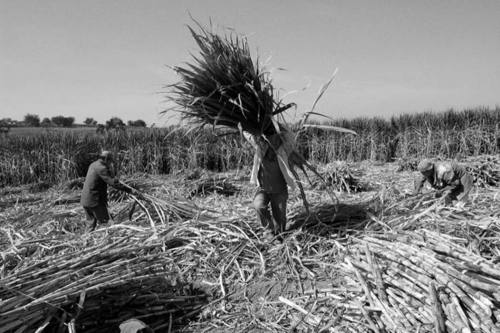 Sugar cane plantation in the interior of the state of São Paulo. Credit: Nico Esteves/IPS

This is why the approval of Constitutional Amendment Proposal (PEC) 438/2001 by the Brazilian Chamber of Deputies on May 22, after a ten-year wait, was cause for celebration throughout the country.

PEC 438 would allow the government to confiscate the property of owners caught using slave labour. The property confiscated would be turned over to the government’s agrarian reform programme, in the case of rural land, or to social initiatives in cities, since the amendment also provides for the seizure of urban real estate.

At press time, in the midst of the whirlwind of activity around the United Nations Conference on Sustainable Development (Rio+20), the draft amendment was still awaiting study by the Senate Committee on the Constitution and Justice.

“This is an important victory. There was a clear demonstration of support from various sectors of society, including 120 Catholic bishops, artists and intellectuals, on an issue and in a struggle that is symbolic in many ways,” said Xavier Plassat, coordinator of the National Campaign Against Slave Labour of the Pastoral Land Commission (CPT).

“The confiscation of the property that was the instrument used to commit the crime, and the fact that it will be turned over to agrarian reform, offer both a punishment and a solution at the same time, breaking the vicious circle of slavery,” Plassat told Tierramérica*.

“It is also symbolic because of the values it promotes, in line with the Constitution: dignity is worth more than land ownership, which will now be conditioned on respect for the land’s social function,” he added.

Plassat highlighted the fierce resistance to the amendment on the part of “sectors of the Congress who represent agricultural interests, and who maintain that slave labour does not exist, since no one is working in chains, or that it is poorly defined in Brazilian legislation, despite the fact that this country is an international reference on this subject.”
Article 149 of the Penal Code states that the use of slave labour is a crime punishable with a sentence of between two and eight years of prison, in addition to the payment of fines and of compensation to the victims. In 2003, its definition was expanded to also include any actions aimed at obstructing workers from leaving their place of work.

It is quite likely that the number of cases recorded is less than the true number. Prosecutors depend on reports that provide exact locations, usually in places that are difficult to reach, in order to catch the guilty parties in the act, so that they can be charged with the crime.

Between 1995 and 2011, some 42,000 workers were freed from slave-like conditions, according to figures from the Ministry of Labour and Employment. Most were working in rural areas, in sectors such as livestock ranching, charcoal production, plantations of sugar cane, coffee, cotton and other crops, industrial tree plantations, mining, logging and rubber tapping.

But cases of slave labour have also been discovered and prosecuted in cities, in textile sweatshops, hotels and brothels, as well as in domestic work and construction.

Nevertheless, freeing workers from these conditions does not guarantee that their rights will be respected. Modern slavery is tied to extreme poverty, and monitoring it is not enough to eradicate it, as demonstrated by the “Atlas of Slave Labour in Brazil”, compiled by researchers from São Paulo State University and the University of São Paulo and released on Apr. 16 by Friends of the Earth Brazil.

In order to bring an end to this crime, workers must be guaranteed a means of livelihood so that they do not fall victim to slavery again, the Atlas maintains.

In Vacaria, a municipality in the southern state of Rio Grande do Sul, an employer convicted of enslaving adolescents on his pine tree plantation was ordered to pay the youths compensation. As soon as the prosecutors who had freed them were gone, the adolescents were forced to repay him part of the compensation.

When he was reported a second time, the plantation owner claimed that he could not afford to pay the compensation ordered because of the small size of his business and his limited resources, but promised to comply.

“The confiscation of land without the right to compensation represents an important instrument to combat this labour and criminal offence,” Ministry of Labour prosecutor Rodrigo Maffei, who worked on the case in Vacaria, told Tierramérica.

“The financial penalties imposed by the Public Ministry of Labour do not have the desired effect in terms of eliminating the incidence of slave labour. That is why the amendment is so important,” he added.

PEC 438/2001 expands Article 243 of the Constitution, which provides for the confiscation of land used to grow plants for the production of illegal drugs.

The first version of the amendment was presented in 1995. In 2003, it was incorporated into a similar proposal that was sent to the Senate.

On Jan. 28, 2004, the murder of three prosecutors and a driver from the Ministry of Labour during an operation in Unaí, in the northwest of the state of Minas Gerais, helped the PEC pass a first vote in the Chamber of Deputies.

But the instigators of those killings remain unpunished. And the pressure exerted by deputies and senators from the Agricultural Parliamentary Front, the bloc that represents the interests of rural landowners, succeeded in delaying the second vote until May 22 of this year.

This “ruralist” bloc is now attempting to have the definition of slave labour revised when the regulations are drawn up for the enforcement of PEC 438.

The Penal Code defines slave labour as reducing someone to a slave-like condition, whether by subjecting them to degrading working conditions that violate their dignity, or to exhausting work hours that prevent them from physically recovering and having a social life. It also includes the curtailment of freedom of movement and forced labour – when the victims are geographically isolated, their identity documents are withheld from them, and they are subjected to physical and psychological threats – as well as debt bondage.

Deputy Rubens Moreira Mendes, of the Social Democratic Party of Rondônia, in the northwest Amazon region, proposed the removal of “exhausting work hours” and “degrading working conditions” from the definition.

Plassat believes that the ruralist backlash will now concentrate on creating a legal void in the definition of slave labour in order to reduce the threat of confiscation.

In this way, when prosecutors determine the commission of the crime, “it would lead to legal action for the expropriation of the property, but subject to appeal,” he said.

For Plassat, it is crucial to eliminate all ambiguities and overcome all short- and medium-term obstacles. In the short term, for example, it is important to ensure that there is no backsliding in the definition of the crime during the drafting of the legislation to enforce the amendment. He also called for better organisation of the fight against slavery with instruments like the “dirty list” of employers who use slave labour that is currently compiled by the Ministry of Labour.

In the medium term, he said, the judicial branch must ensure that perpetrators are sentenced as soon as the crimes are committed, in order to proceed with the confiscation of their properties.