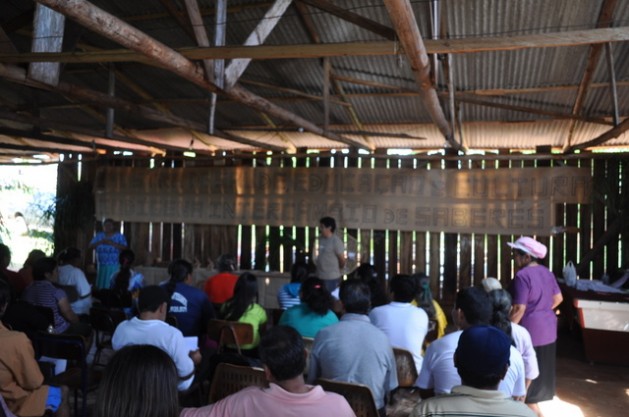 Meeting on health and food security in the Caingangue Guarita Reserve in southern Brazil. Credit: Courtesy of Marcos Antonio Ribeiro

Ida Pietricovsky, an adviser to the United Nations Children’s Fund (UNICEF) in the northern city of Belem do Pará, stressed the lack of systematic information on the health of indigenous people.

Speaking to IPS, officials at the Health Ministry’s communication office blamed the shortcomings on the incomplete transition in healthcare for indigenous communities, which in 2010 began to be transferred from the National Health Foundation (FUNASA) to the Special Secretariat on Indigenous Health (SESAI).

Whatever the case, the situation is hindering the implementation of public policies catering to the specific needs of each indigenous group.

“It’s a very serious problem, and we are trying to discuss it with SESAI,” Pietricovsky told IPS. The way information is gathered differs from region to region, she said, which makes it difficult to compare data.

UNICEF and other U.N. agencies have set up offices with multidisciplinary teams to serve the Food Security and Nutrition Monitoring System and thus improve nutrition in every Special Indigenous Health District, in conjunction with SESAI.

The initiative first began to work with children from the Xavante indigenous community in the western state of Mato Grosso, a region with high levels of mortality related to malnutrition and diarrhea.

“The idea is to train the teams to prevent further deaths,” Pietricovsky said. “Child mortality in indigenous areas is double the national average, and improvements in the indicators have been very slow.”

The latest report on violence against indigenous people by the Catholic Indigenous Missionary Council, based on 2011 figures, includes a chapter on healthcare neglect.

The report describes 53 cases of negligence in healthcare in 16 states, which affected a total of 53,000 people. The northern state of Amazonas accounts for the largest number of cases.

The study is based on newspaper and magazine articles from the different regions and missionary reports. It says the general complaint in indigenous communities is that there is a shortage of health professionals, medication, equipment, transportation and assistance – in short, that they have been abandoned by the health system.

From north to south, the needs are similar in this immense country of 198 million people. Of the total population, 900,000 people self-identified as indigenous in the 2010 census, belonging to 305 different ethnic communities who speak 274 languages.

In Dourados, a city in the southwestern state of Mato Grosso do Sul, the native reserve’s proximity to the city has driven up levels of alcoholism, diabetes and hypertension among the indigenous people.

The demarcation of the land of the Yanomami, who live in the north of the country, forced members of that group to abandon their nomadic lifestyle and has left them confined in areas that are near army garrisons.

As a result, they began to eat processed foods, because fish are scarce in the rivers and streams in their settlements. And when they seek medical assistance at the municipal health posts, they run up against discrimination and rejection.

“We are fighting for every community to regain its autonomy and a central role in feeding itself,” Sandro Luckmann, a member of the Council of Missions among Indigenous people (COMIN), run by evangelical churches, told IPS.

COMIN has been working for 30 years with the Caingangue people in the Guarita Reserve in the southern state of Rio Grande do Sul, whose capital is Porto Alegre.

The Caingangue people are the third-largest native group in Brazil, and Guarita is their biggest settlement, according to the 2010 census.

Luckmann pointed out that ensuring healthcare and food security form part of a broad process, which includes finding new means of production.

“The demarcation of indigenous lands does not create the conditions to guarantee food security for the community,” he said. “There are programmes run by one government or another, but no stable public policy,” he complained.

In Guarita, Caingangue men and women must find work in meat-packing plants in nearby cities, or as temporary workers harvesting apples, onions or grapes on plantations where they sleep in precarious barracks.

“There are stories that in the meat-packing industry, the indigenous workers are given the worst jobs, the ones no one wants to do,” Luckmann said. “They commute up to four hours by bus, to work an eight-hour day, and then ride back again to be able to sleep in their homes.”

He pointed out that article 231 of the Brazilian constitution establishes that the demarcation of ancestral indigenous territories must guarantee the groups’ physical and cultural survival and the subsistence of their communities. But that does not happen, he said.

“When we talk about food security and sovereignty, we have to think about the territory that indigenous people occupy, and understand that the changes in their living conditions give rise to nutritional deficiencies and health problems,” he said.

Marcos Antonio Ribeiro of the Caingangue community, who coordinates SESAI in the Guarita Reserve, confirmed that the change from the traditional eating habits of his people to a less diversified diet based on processed foods had led to a rise in undernutrition, anemia and vitamin deficiencies.

In the past, the Caingangue people’s diet was based on the cultivation of corn, squash and beans, the harvesting of wild fruits and nuts, and fishing.

But the community’s diet changed because of the ease of acquiring commercially processed foods, the lack of land to farm, and the indiscriminate use of pesticides, which has killed off several native plant species.

Ribeiro explained to IPS that the dietary changes not only cause health problems, but are also harmful to the Caingangue culture, because there is a series of rituals associated with eating and food.

For example, “when a youngster is going to eat crumbs from a cornmeal cake, the oldest person in the house rubs his body all over and makes him previously drink an infusion, because the Caingangue believe that without this ritual, youngsters will be weakened and will suffer cramps as adults,” he said.

The Caingangue, who in the past depended on medicinal herbs, now want to see health professionals. And when they do, they are found to have high levels of diabetes, hypertension, and high cholesterol and triglycerides.

“And in recent years, there have been cases of cancer of all kinds in indigenous people of all ages, even children,” he said.

Ribeiro, who has an educational background in nutrition, is promoting a return to traditional knowledge in indigenous institutions and communities. His own mother died of complications from diabetes, becoming part of statistics that are still invisible to the health authorities.