TUNISIA: Neo-Liberalism the Issue, Not Islam 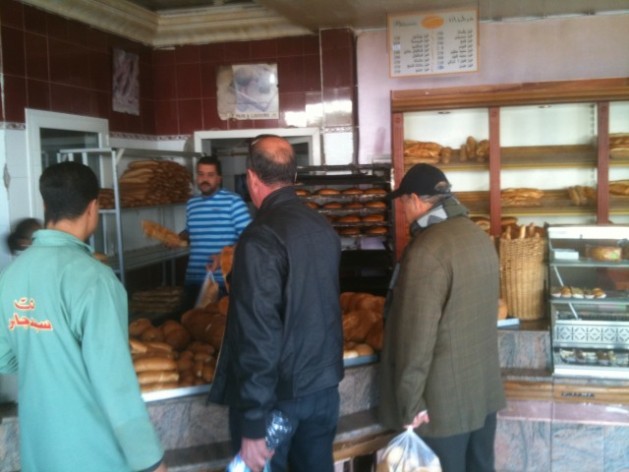 The price of bread has been a strong political force in Tunisia. Credit: Jake Lippincott/IPS.

TUNIS, Dec 10 2011 (IPS) - On the verge of officially forming a coalition government to run the country and rewrite the nation’s pre-revolution constitution, Tunisia’s dominant, Islamist political party Ennahda has come under fire for its economic neo-liberalism, both from opponents and from coalition partners.

After an election noted for its transparency, the major Tunisian parties are busy putting the finishing touches on the first democratic government in the nation’s history. The Islamist party Hizb Ennahda will get the most important positions, including the coveted post of prime minister.

A major reason for Ennahda’s popularity is its history of resistance against the old dictatorship. Its supporters see it as both the party of Islam and the party of revolution and change. However, when it comes to issues concerning economics and international finance, it generally advocates continuing the generally neo-liberal policies of the former dictatorship.

Ennahda dominated the October elections, winning three times as many seats as the next most popular party. However, since Ennahda failed to win an absolute majority it was obliged to form a coalition with two centre-left parties Congres Pour le Republique (CPR) and Ettakatol.

These parties are officially secular, and have long been wary of Ennahda’s Islamist background. However, recently these parties, other leftist groups and their supporters on the street have been increasingly criticising Ennahda’s policies.

Ennahda has been praised for its moderation, and has been able to win the support or at least toleration from secularists, big business, foreign governments and other groups traditionally distrustful of Islamist movements.

While Ennahda has been able to placate secularists by officially advocating personal and religious freedom, it is reaching out to the international financial community and big business by pledging to counterbalance its left-wing coalition partners.

One high profile debate that has recently broken out between the leftists and Islamists in the governing coalition regards Tunisia’s international debt.

Tunisia’s deposed dictatorship took out numerous international loans from developed nations and international organisations. Much of this money went to actually developing Tunisia, but given the rampant corruption and cronyism of the old regime, it is widely believed that a significant portion of this money was misappropriated. Many Tunisians believe that it is unjust to expect them to pay back loans that enriched a dictator.

Responding to this popular outrage, figures within Tunisia’s largest secular party, the CPR, want to audit Tunisia’s international debt, and stop payment on the portion of this that was found to have been illicitly used by the old regime.

Speaking to IPS, CPR parliamentarian and economic committee member Mabruka Embarak spoke about her views on the issue of foreign debt in general. “We are trying to be as independent as we can from these international (lending) institutions…we have a big problem of debt…we can’t just take loans and not look at our previous debt.”

Her views on repaying the debt supposedly misappropriated are even stronger. “We do have a right…to audit this debt. The part of the debt that served the regime, that was not meant to help Tunisian citizens that obviously was used for the mafia (former ruling families)…that is millions of dinars. Tunisian citizens will not carry this burden…(international lenders) gave these loans to a dictator and (they) should have known better.”

While making it clear she can’t speak for Ennahda, she said that the Islamist party “differs” with CPR on this issue.

Speaking from the Ennahda headquarters in Tunis, party representative Sayed Feyjani made it clear that Ennahda is committed to attracting foreign investment to the country. “Tunisia must be attractive to international investment. We should do everything we can do to avoid international debts, that’s excellent, but…we are against dogma and we need investment and we need to seek (investment) from where ever it comes.”

While canceling portions of the international debt may resonate among average Tunisians, many in Tunisia’s financial community find more common ground with Ennahda.

Fahdel Abdelkefi, president of the Tunisian stock exchange told IPS that he was impressed with Ennahda’s “extremely liberal” economic policies and hoped that they would balance out the more left-wing parties in their coalition.

Ennahda is generally seen here as a party of the working class, and their religious rhetoric has alienated many in the upper classes. Abdelkefi still expressed concerns about Ennahda’s social policies, but clearly sees them as likely to stop any radical moves by its coalition partners.

This is especially true, he says, when it comes to freezing any of Tunisia’s foreign debt, a policy which he decries as “populism”. “Freezing the payment of foreign debt would be the biggest catastrophe a country like Tunisia could know” and would cause Tunisia to “lose its investment grade for quite some time.”

He believes that foreign debt is not significant enough to warrant such drastic action. “All foreign debt is not all that important, it only represents 20 percent of Tunisia’s GDP. Tunisia has the means and capacity to pay back its debt like an honest state.”

While Abdelkefi sees paying back the foreign debt as an issue of national integrity, many Tunisians resent the west for its decades of support for the former dictatorship, and feel that it is morally wrong to expect them to pay for the former ruling family’s decadence.

The fact that Ennahda, despite its revolutionary credentials, has begun to look like the champion of big business and international finance could harm its reputation as the party of the downtrodden.

Tunisia has a long tradition of a large public sector, and many Tunisians rely on extensive subsidies to survive. International lenders like the International Monetary Fund (IMF) have long been calling on the Tunisian government to trim these government expenditures. However, during the dictatorship small changes in the price of bread led to massive, violent street protests.

Ennahda surely knows this, and Ennahda representative Sayed Feyjani told IPS that despite the desire to get loans and investment, the party would not impose radical liberalisation. “(Any deal with the IMF) will be a negotiation, we need the public sector, we need jobs, it’s simple as that…definitely we are not going to make people starve.”