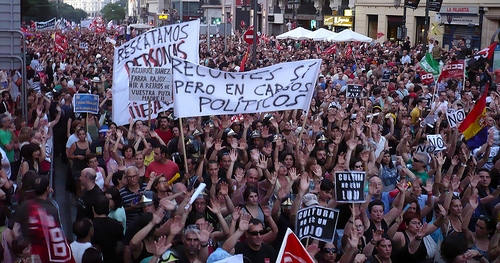 MADRID, Sep 29 2012 (IPS) - One of every three euros that the Spanish government plans to spend in 2013 will go to servicing the public debt.

The draft budget presented by Prime Minister Mariano Rajoy’s centre-right government on Thursday shows that the debt will continue strangling a population already hit hard by the dismantling of public and social services like education and health.

The debt is swallowing everything in its wake. The debt servicing payments are nearly equivalent to the combined budget for all of the cabinet ministries, which totals 39.7 billion euros (some 51 billion dollars).

The drastic austerity measures adopted in the last few months did not even make a dent in the soaring borrowing costs, which have been driven up by the growing lack of confidence in the government’s ability to meet its obligations.

In 2007, Spain’s public debt represented 35.5 percent of GDP; this year it represents
75.9 percent; and by 2013, it will represent more than 80 percent, according to the government’s projections.

Against this backdrop, the question is what will be cut next, as Spain moves towards a sovereign bailout by the so-called “troika” of creditors – the European Commission, European Central Bank, and International Monetary Fund – which would bring further restrictions for the people of Spain, whose living conditions have already taken a nosedive.

“This is the troika’s budget, the response to the requirement to control the deficit,” economist Alberto Garzón, a lawmaker representing the United Left opposition party, told IPS. “But that will be impossible to do by means of these measures. It is apparently a paradox, but it is clear that the objective is to impoverish the citizens and change the (economic) model.”

In his view, the current political and economic circumstances in Spain have many points in common with the situation in Latin America in the 1980s and 1990s, a period marked by a high level of indebtedness which revealed the weaknesses of the economies of that region and led them to blindly follow an agenda of structural adjustments, privatisation, and liberalisation of the economy, with negative social consequences.

Pablo Iglesias, a professor of political science at the Complutense University of Madrid, told IPS that “the 1980s demonstrated the success of the neoliberal policies that triggered the dismantling of the social gains achieved in earlier years, and which created many inequalities.”

He said the situation was repeating itself now in Europe’s “periphery” countries, where austerity measures are putting an end to social rights that had not been called into question until now.

“This is the budget necessary for pulling out of the recession,” Spain’s finance minister, Cristóbal Montoro, said in a press conference Thursday.

Deputy Prime Minister Soraya Sáez de Santamaría went a step further, and described the draft budget as “the most austere.”

According to the government’s forecasts, Spain’s GDP will shrink by 0.5 percent and unemployment will hold steady at the current 24 percent – the highest rate in Europe.

But the IMF projects a 1.2 percent drop in GDP. If that projection is accurate – and considering that the 4.5 percent fiscal deficit target imposed by the EU is the absolute ceiling for the Rajoy administration – the only choice that the prime minister has is to adopt further budget cuts.

In less than a year, his cabinet has cut key areas like education and health, with measures that deny public health care to undocumented immigrants and require that patients pay for a number of medicines that until now had been offered free in the national health service.

Until the public finds out the details of the draft budget, to be published Saturday, attention is being trained on the question of pensions.

In July, Rajoy said retirement pensions would be “the last thing” he would touch. The government is now saying it will increase them by one percent – below the three percent rise in the cost of living in September, after the value added tax was raised from 18 to 21 percent.

As an alternative, the government decided to withdraw nearly four billion dollars from a decade-old pension reserve fund.

But if the government ends up freezing pensions, the impact will be felt throughout Spanish society.

With the soaring unemployment and cuts in unemployment benefits, grandpa or grandma’s pension has become the sole means of survival for many families.

“It is inevitable that the citizens will pay,” minister Montoro admitted.

Deputy prime minister Sáez de Santamaría insisted that the priority was “social spending.” But all it takes is a walk down the streets of Madrid to see how living conditions are going downhill: More and more people are digging through garbage dumpsters for food.

The government insists on the formula of “structural reforms, deficit control, and a return to a growth path” – a mantra that it defends thanks to its absolute majority in parliament, but which is generating more and more unrest.

On Tuesday, tens of thousands of people answered the call to surround the Congress building, and police used rubber bullets and batons to disperse the crowd, arresting 35 demonstrators.

The authorities also presented a package of economic reforms, in line with the demands of the “troika”: 43 draft laws to free up different sectors of the economy – a prescription widely applied in Latin America 20 years ago.

But if the experience of that region awakens so many echoes in Spain today, it could also help point the way to possible solutions, some analysts say.

In Iglesias’ view, the question of the debt could help “put politics back at the centre of the economy.” He cited the example of Ecuador, where President Rafael Correa set up a commission in 2008 to audit the country’s foreign debt and determine which portion was “illegitimate.”

In response to the presidential commission’s findings, the government suspended payments on 70 percent of the public debt.

Social movements and political groupings like the United Left are calling for a referendum in Spain, to set a limit on debt payments and budget cuts.

“The unprecedented dismantling of the welfare state is leading to a social crisis,” Iglesias argued.

He also said that what is happening in Europe cannot be compared to what happened in Latin America. He added that the conditions are in place in Spain for “a new political and economic paradigm.”