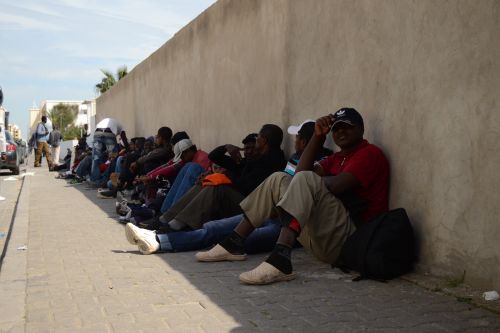 Refugees from the Choucha camp in Tunisia are demanding recognition of their legal status. Credit: Alberto Pradilla/IPS

TUNIS, Mar 31 2013 (IPS) - “We need a solution. The U.N. has created the problem, and they should do their work and fix it,” says Bright, a young Nigerian stuck in the Choucha refugee camp in Tunisia, a few kilometres from the Libyan border.

Bright and hundreds of other refugees have spent the last two years in a camp that has turned into a no man’s land. They are mainly immigrants from sub-Saharan Africa who were living in Libya but fled the country at the start of the armed clashes that led to the fall of the regime of Muammar Gaddafi (1969-2011).

Of the thousands who originally crossed the border, 250 are left, from different countries. Their refugee status is not recognised, and officially they don’t exist. The United Nations rejected their applications for asylum, and they can’t return to their countries of origin or Libya, where blacks are suspected of being loyalists or mercenaries and face repression.

They are living in extreme conditions, and their plight is ignored by international institutions and the Tunisian government.

During this week’s World Social Forum, held in Tunis, a group of 50 refugees made it to the capital to demand a solution. Thirty-seven of them declared a hunger strike on Friday Mar. 29 outside the office of the U.N. refugee agency (UNHCR).

The hunger strikers pledged to continue their fast until a solution was found. The situation of the refugees will become even more complex if the camp is closed in June, as the UNHCR has announced.

“In my country I was active in political issues, so I was persecuted. That’s why I went to Libya,” Mousa Ibrahim, from Chad, tells IPS. People from Chad are the largest group in Choucha, numbering around 80.

Until Mar. 20, 2011 Irahim was working in Zawiya, a city on Libya’s Mediterranean coast 45 km west of Tripoli, where he also recruited young men to fight in his country, to which he still had ties. When the civil war broke out, he fled with his then-pregnant wife and their five-year-old son.

“I registered in the camp because they promised that they would recognise us as refugees,” he complains. But more than 48 months have gone by; his daughter Jalida was born in Choucha, and his situation has merely gotten worse and worse.

“The Tunisian refugee commission has rejected me. They say I have two options: to go back to my country or return to Libya. In Chad I would be thrown into prison or killed. And in Libya, black people are persecuted. I just want to be recognised as a refugee and allowed to go to a country where I can live in safety,” he says.

Two years ago, the Libyan conflict triggered an exodus that overwhelmed Ras Jdir, the main border crossing into Tunisia from Libya, and led to its temporary closure.

The UNCHR gradually transferred most of the refugees from the Choucha camp. The remaining families, from Chad, Nigeria, the Western Sahara, the Darfur region in Sudan, or Palestine, complain that they were left out of the transfer, for one reason or another.
At first, dozens of organisations were working to address the humanitarian crisis in the camp. But now, hardly any aid is arriving. The refugees continue to sleep in the tents in the camp, but the assistance is drying up.

Food stopped arriving five months ago, and they do what they can to find food. And since their applications for refugee status have been rejected, they don’t have the right to be relocated to another country. In practice, it is as if they didn’t exist.

“We aren’t immigrants and we aren’t trying to go to another country because we’re looking for work. The problem is political: we are refugees,” Bright tells IPS during a sit-in outside of the European Union office in Tunisia on Wednesday Mar. 27.

Frightened by the prospect of the closure of the camp in June, the refugees have begun to mobilise.

But survival itself is difficult, let alone carrying out a campaign to raise awareness of their plight and demand solutions.

On one hand are the economic problems. They hardly scrape by, and need the help of Tunisian and foreign activists who collect funds to pay for their trips. Then there are the obstacles put in place by the Tunisian government, which has sent in police to keep the refugees from moving about.

That happened in January, when around 100 of them managed to reach the capital, where they spent five days informing people about their situation. And it happened again before the World Social Forum. When they were heading out of the camp, the police stopped their buses at Ben Gardane, 443 km south of Tunis.

But half of the refugees who had set out, including Ibrahim and Bright, made it.

Their signs were visible at the entrance to the World Social Forum, held Mar. 26-30 on the El Manar university campus. The placards were also seen outside official buildings like the U.S. and British embassies.

Their demand is clear: a solution to leave behind the limbo in which they are living.

But although the question of the refugees came up in several workshops this week at the WSF – the largest global gathering of organised civil society opposed to the direction globalisation is taking – and many activists expressed solidarity with their cause, no clear statement was issued urging the U.N. to reconsider their status.

“This is a real case, not theory,” Bright complains. His tired eyes show how fed up he is with all the doors being slammed in his face, and reflect his lack of confidence in institutions that have failed to help him and his fellow refugees.

The refugees say official representatives have tried to negotiate in parallel with the different national communities in the camp, while the deadline of closure looms.

The WSF ended Saturday in Tunis with a closing act and a demonstration for the Palestinians’ Land Day. Meanwhile, the unrecognised refugees will stay here, waiting for a solution.