Persecuted Libyans Struggle to Be Heard 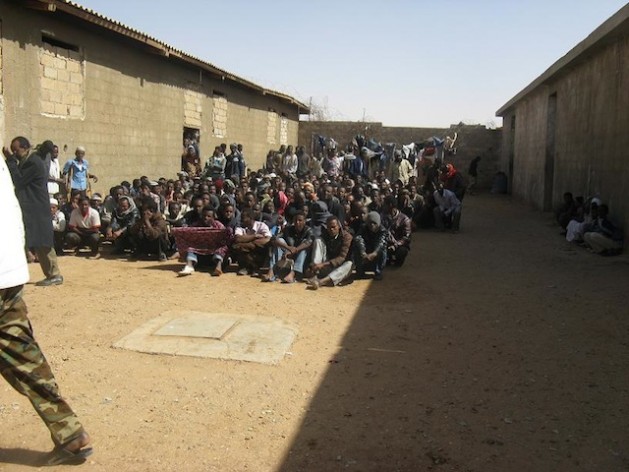 Internally displaced persons outside a camp in Kufrah in South Libya. Credit: UNHCR.

Such are the conditions of Libya’s approximately 80,000 Internally Displaced Persons (IDPs) post the revolution. The refugees comprise Libyans ethnically cleansed from towns and cities due to their perceived support for former dictator Muammar Gaddafi, and those who have fled the continued fighting between rival militias across the country.

Economic and transitional migrants, and those seeking political asylum from neighbouring countries are amongst the 80,000 being held in 25-30 detention centres and refugee camps run by the government, militias, the army and the police. Many of the centres receive aid from Libyan and international NGOs but their resources are limited.

“Since May alone 100 boat people died trying to cross from Libya to Europe on overcrowded and unseaworthy boats. Every month there are thousands of refugees who make the dangerous journey because they are so desperate,” chief protection officer Samuel Cheung from the UN High Commissioner for Refugees (UNHCR) in Tripoli tells IPS.

“The most vulnerable are on the boats, including pregnant women and men with gunshot wounds who are unable to get adequate medical attention,” says Cheung.

About 20,000 of the approximately 35,000 internally displaced Tawergha, black Libyans of slave descent, many of whom were supporters of Gaddafi, fill a number of refugee camps in Tripoli and Benghazi after they were ethnically cleansed from Tawergha and Misrata during the revolution.

Tawergha town was used by Gaddafi as a base to attack the rebel stronghold Misrata 38km away.

Nafisa Muhammad’s home is now a cramped, stiflingly hot room in a prefabricated building on a former Turkish construction site located on the airport road in Tripoli. Muhammad, 31, a former secretary at Misrata university has the “luxury” of having the room to herself, unlike most of the other 400 displaced Tawergha refugee families at the Fillah refugee camp who are forced to sleep on thin mattresses on the floor.

“My one-year-old son was killed during the fighting in Misrata between pro-revolution rebels and Tawergha supporters of Gaddafi. Two of my brothers died in the war, one during the fighting. The other, who was a civilian, was abducted at Benghazi Airport by Misrata militiamen and beaten to death within a day of arriving at a detention centre in Misrata,” Muhammad tells IPS.

Muhammad’s cousin died when he, together with a group of pro-Gaddafi fighters, was immolated after pro-revolutionary rebels filled a fire truck with petrol, doused the men and set them alight. Videos of the mutilated corpses were then sent to family members. This was payback for alleged atrocities committed by the Gaddafi loyalists against Misrata’s civilians during the siege of the city.

Hannah Jaballah, 25, Muhammad’s neighbour, fled with her husband and two little girls from Misrata during the fighting. Her daughters now spend their days playing amongst the trash and the windswept gravel which surrounds the rows of prefabricated dorms which fill Fillah camp.

A month ago her husband was abducted by Misrata militiamen in downtown Tripoli as he ran a banking errand.

“I visited my husband a month ago in a detention centre in Misrata. He had a broken shoulder and had been beaten, and I have no idea when they will release him,” Jaballah tells IPS.

Muftah is Fillah camp’s IDP coordinator. He would not give his surname for security reasons. He too escaped from Tawergha during the war but is now afraid to leave the camp for fear of being abducted by Misrata militiamen who raid the camps on a regular basis and abduct young men, many of whom are never seen again.

“Although we are free to leave the camps, most of the young men don’t do so. We rely on the women to bring food and other necessities into the camp,” Muftah tells IPS.

Cheung says “Libya’s IDPs also include people who have fled their hometowns and cities due to ongoing fighting between rival militias. Some of the roots of the fighting go back to tensions during the Gaddafi era with some of the violence revolving around tribal land disputes, which have now become points of tension following the war.”

The UNHCR is concerned about the abuse meted out to Libya’s internally displaced and the lack of due judicial process.

“Many of the refugees have fled political persecution in their home countries and fled to Libya to escape repression but a lot are being forcibly repatriated including Somalis who face possible death on their return. Others have come to Libya for economic reasons because Libya’s economy has traditionally been a source of employment for many foreigners,” Cheung tells IPS.

The conditions under which transitional, economic and political refugees from neighbouring countries are being held is also of major concern to the organisation.

“Many of these conditions fall well below international standards and this situation is exacerbated by the lack of international funding which further deprives these centres of the necessary resources to care for the detainees by providing  them with adequate medical care  and consistent access to food and water,” says Cheung.