TRIPOLI, Sep 9 2011 (IPS) - The Libyan revolution has been devastating for 20-year-old Alybe Nally from Nigeria, as it has been for countless others from Africa seen by the rebels as Gaddafi loyalists. “When the rebels took over Tripoli two weeks ago they took my money, my mobile, my passport…All I have is what you see now,” he says, pointing to his mismatched pair of sandals. 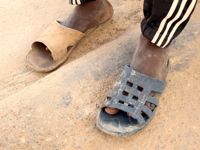 All that Alybe Nally has left to walk in. Credit: Karlos Zurutuza/IPS.

Alybe left Nigeria three years ago to work in Tripoli washing cars. He now finds himself in the makeshift refugee camp Sidi Bilal by an abandoned port on the outskirts of the city.

Alybe says he and more than a thousand others in the camp had taken to drinking seawater before Doctors Without Borders began distributing drinking water last Saturday. Conditions are hellish at the camp, but the refugees here are afraid to leave.

“They grabbed me at gunpoint at the entrance of the camp ten days ago,” says 27-year-old Nigerian Eddy Ohasuyi. “I was kept in jail for ten days. They would call me ‘mercenary’ and beat me every morning, and then force me to clear debris and garbage from the streets.” All he has to wear is a thick black coat.

Stories of forced labour are common in Sidi Bilal. People speak of being taken by force, or promised a salary they never get. Most are back in the camp in a day or two. But others like Monday Abiyan are still missing.

“My brother was taken at gunpoint ten days ago but he hasn’t come back yet,” says Osama Abiyan sitting under the shade of a sunburnt wooden hull. The 23-year-old Ghanian fears his brother might have been tortured, or even killed.

Many in the camp speak of sexual assaults on women. Patience, from Ghana, says she squeezes between two male friends and hides under a blanket to sleep.

Fights over scarce supplies are becoming more frequent. As this IPS correspondent visits the camp, a group gathers to listen to reassurances from government envoy Ibrahim Ali.

“We’re working to protect you and guarantee your security,” the Stabilisation Committee representative told a group of sub-Saharan Africans gathered around him. “Once you’ve made a list with your full name and passport number, we’ll try to get you out of here as soon as possible.”

“There’s still a war going on in the country. It’s not easy to cope with this crisis but the National Transition Council (Libya’s de facto new leadership) is really tackling the issue,” Carlos Afonso, a European Commission representative accompanying the NTC representative tells IPS.

Staff at many humanitarian organisations are not so sure. Humans Rights Watch has called on the NTC to stop the “arbitrary arrests and abuse of African migrant workers and black Libyans assumed to be mercenaries.” It said in a report last Sunday that the “widespread arbitrary arrests and frequent abuse have created a grave sense of fear among the city’s African population.”

As Ibrahim Ali finishes delivering his reassurances, the meeting is abruptly interrupted by people yelling at the entrance of the camp. Two armed man are forcing two black people into an orange car they came in. They hide their weapons as they see foreign reporters about. They are quickly surrounded by angry black men.

“You see? If it weren’t for you they would have kidnapped these two young guys. This is happening everyday,” Martins Osa, 19, tells IPS.

The NTC envoy pulls the unexpected visitors aside and escorts them back to their car. When asked by IPS whether the authorities would take any legal measures against the two armed men, Ibrahim Ali replies with a smile that the whole incident had just been “a misunderstanding.”

The International Organisation for Migration (IOM) has organised the evacuation of more than 1,600 migrant workers on chartered boats out of Tripoli over the past two weeks. But the IOM says there are still hundreds waiting for a way out. The position of people from sub-Saharan Africa widely suspected of being mercenaries is particularly dangerous.

The conditions at the camp are also setting off fights among the refugees. At one place a fight breaks out between two refugees over a new water tank. A few minutes later, two armed Libyans on a pickup barge in and fire in the air, then directly to the ground.

Nobody got hurt, but refugees say such display of violence is not unusual. Young Libyans on the prowl often descend on the camp at night looking for women, refugees at the camp say.