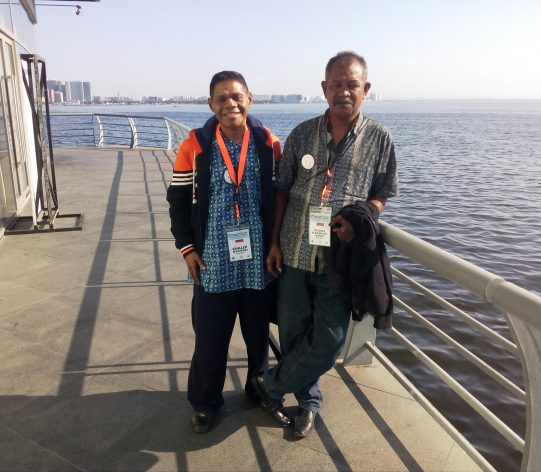 Thobias Alexander Manas (R), here with his former social worker Kalep Manikari (L), was shunned and driven from his school, home, and village in West Timor when he contracted leprosy as a teenager. Thanks to individual intervention and skills training, Thobias, now age 52, owns a sewing shop and a rice and poultry farm, and is a community leader in the village that once rejected him. Credit: Ben Kritz/IPS

MANILA, Mar 4 2019 (IPS) - The tragic tale of Thobias Alexander Manas’s personal experience with leprosy is all too typical.

Manas, who is now 52, is from West Timor, Indonesia, and was afflicted with leprosy as a grade 10 student. The reaction to his illness as soon as he exhibited signs of the disease was predictable. Shunned by his friends and forced to leave school, Manas was eventually driven out of his family’s home by his sisters and exiled from his village. He was eventually reduced to an isolated existence in a shanty he cobbled together from discarded materials, he told IPS through an interpreter.

When his disease became too painful–it had progressed to the point where Manas suffered permanent deformity of his hands–he made his way to a government health clinic where he was finally properly diagnosed and prescribed treatment. Fortunately for Manas, the clinic had a referral arrangement with UK-based Leprosy Mission International, which offered assistance to Manas.

“Thoby had to end his schooling because of his sickness, and so the most important thing was to offer him some kind of skills training,” explained Kalep Manikari, a former field worker for Leprosy Mission International and now a youth minister. Manas received training in tailoring, and was able to return to his village and set up a small shop.

His talent in spite of his disability helped to overcome the stigma he had experienced earlier, and it helped that Manas had been shrewd in his choice of vocation: His village only had one other clothing maker – who has now been his wife for 19 years. “Still, my family was against the marriage, because I had been sick,” Manas tells IPS through his interpreter. “But I said, it’s up to us to manage our lives, so we went off and married without their consent.”

Facing the prospect of losing not just one but both of the only people who could provide well-made clothing in the village, Manas family eventually accepted his marriage and his business thrived; he explained that he had recently diversified into poultry and rice farming, and had been able to send his daughter to college. Is was not without some pride that Manas described how he is now considered “well-off,” and has been transformed from a once-shunned leprosy sufferer to one of his village’s leaders. 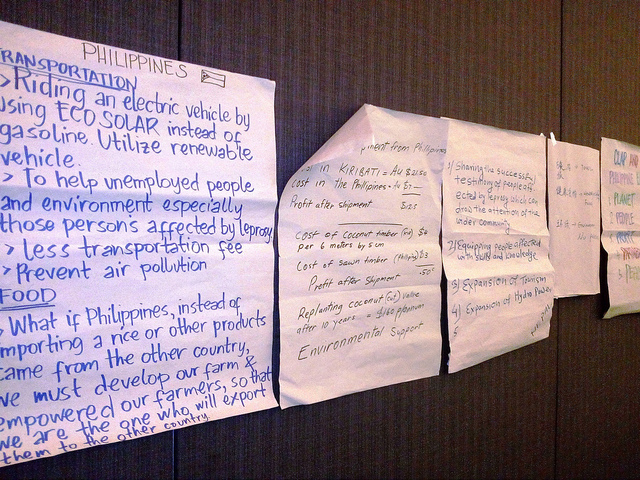 Conference attendees at the Regional Assembly of Organisations of People Affected by Leprosy in Asia held a brainstorming session to develop ways in which their groups could generate sustainable incomes. Credit: Ben Kritz/IPS

Skills and livelihood training has always been a key objective of organisations supporting people affected by leprosy, and the three-day conference was filled with success stories much like Manas’s. While this remains a priority strategy, leprosy advocacy groups are shifting more of their focus toward organisation-level social entrepreneurship.

In a workshop session at the Regional Assembly of Organisations of People Affected by Leprosy in Asia in Manila on Monday afternoon, conference participants discussed various ways their groups could generate revenue through social entrepreneurship.

The approach is as much practical as it is aspirational. A common theme that emerged in the conference’s first day was the challenge faced by organisations in achieving and maintaining financial sustainability. Government and other donor grants are variable, and unavoidably limited. As Dr. Takahiro Nanri, the executive director of the Sasakawa Memorial Health Fund (SMHF), commented, “We are willing to give a great deal of support to these organisations, but whether we wish it or not, sometime it will have to end. Hopefully that does not happen before the organisations are able to stand on their own, so that is what we are trying to help them achieve.” SMHF is a sister body of the Nippon Foundation (TNF), one of Japan’s largest foundations.

Social entrepreneurship, the conference participants agreed, was a practical approach to meeting financial and social needs. Revenues from products created by organisations of people affected by leprosy fund the organisations’ activities, while providing livelihoods for their beneficiaries.

Even though there is a great deal of enthusiasm for the idea of organisation-level social entrepreneurship, there was a sense among the conference participants that in some circumstances success might be more easily described than achieved. Differences in resources and capabilities may narrow options for some organisations and expand them for others.

That reality makes it important for organisations to give equal attention to both collective and individual entrepreneurial opportunities, Manas suggested. “I just needed a chance. It’s important that organisations help people who can help themselves.”