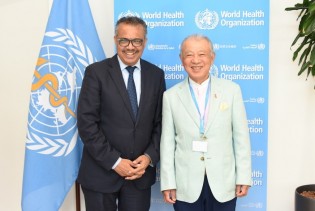 Leprosy Must Not Be Forgotten amid the Covid-19 Pandemic

By Yohei Sasakawa
The 74th World Health Assembly (WHA) takes place from May 24 to June 1. This year's gathering is likely to be dominated by Covid-19, but here I want to talk about a different disease—leprosy—and a resolution that was adopted at the WHA exactly 30 years ago.

By Stella Paul
In Jack Niedenthal’s office in Majuro, there is an ominous reminder of the dark history of the Marshall Islands—once the site for dozens of nuclear tests conducted by the United States between 1946 and 1962. But it also provides a strong message about the future of island nation.
Next Page »
ADVERTISEMENT ADVERTISEMENT