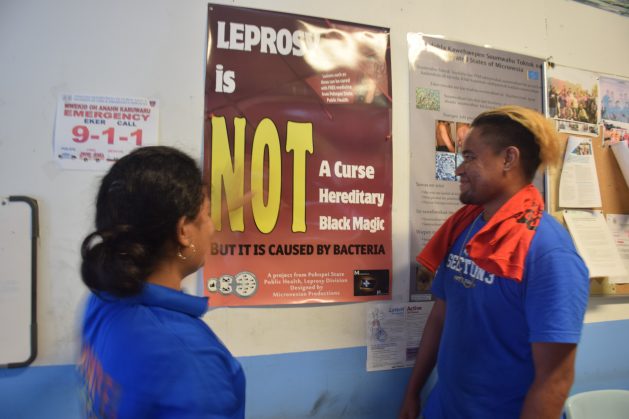 POHNPEI, Apr 8 2019 (IPS) - It’s a good day for Dexter, a 25-year-old fisherman from Pohnpei in the Federated States of Micronesia. He’s just been told that he is cured of leprosy.
“I have been sitting at home for nearly a year now,” Dexter, who doesn’t want to reveal his last name, tells IPS. “But now I can finally return to my job,” he says with a smile.

However, not every patient in Pohnpei State may be as fortunate as Dexter. The region is grappling with a shortage of leprosy drugs. Multidrug therapy (MDT) is provided for free by Novartis, through the World Health Organisation (WHO) and distributed across the globe. But Pohnpei has to send through an application for new stock to the national government.

“We have not received any fresh supply of drugs this year, so we are giving what we have in our stock although they are now expired,” reveals Dr. Elizabeth Keller. She is the acting chief of Pohnpei State’s Department of Health Services and also heads the region’s leprosy programme.

Pohnpei State has the largest number of leprosy cases in the country—nearly 100 new cases are reported here every year. And Micronesia still remains one of three Pacific island nations, along with the Marshall Islands and Kiribati, that is yet to eliminate leprosy or Hansen’s disease. In fact, according to the WHO, Micronesia has the highest prevalence of Hansen’s disease in the entire Pacific.

But the news of the shortage in Pohnpei State appears to take many by surprise, including Mayleen Ekiek, who heads the country’s National Leprosy Programme (NLP).

“I am surprised to hear this. This should not happen. I don’t know why they have not received the fresh stock because the supply is made once the requisition is submitted to the government,” she comments.

But it is easy to see how Ekiek could be unaware of the situation.

Providing healthcare to the country’s estimated 105,000 people, who are scattered over 65 of the country’s 607 islands, is complicated. While the Micronesia’s four states receive their funding directly from the national government, they work independently and usually only communicate directly with the federal government.

“The Department of Health Services in each state provides medical and public health services through a hospital, community health centres and dispensaries. Each state system is autonomous,” states the WHO.
As state health departments are not mandated to report to the NLP, Ekiek is sometimes caught unaware by developments, such as the current drug shortage.

However, Keller says that her department has already asked for the fresh supply and hopes it would come soon. Meanwhile, she assures that the medicine will not cause any adverse effect on the patients’ health. “These may not work as effectively as fresh drugs, but they will not harm,” she says. 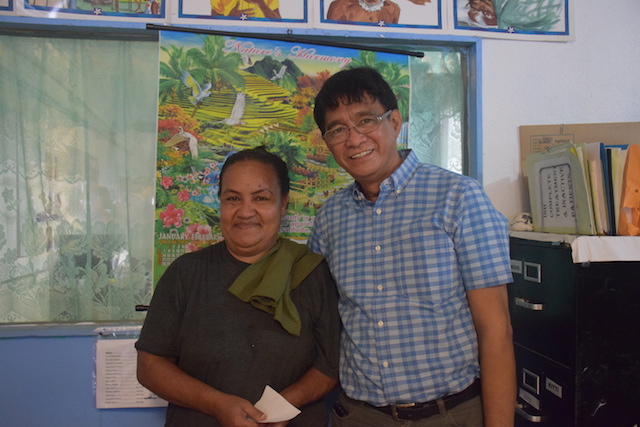 Dr Arturo Cunanan with a patient at a leprosy clinic in the Federated States of Micronesia. Cunanan, a world expert on Hansen’s disease, says that a review of Micronesia’s national leprosy programme is overdue. Credit: Stella Paul/IPS

And while there is also a mechanism to bring the various states in Micronesia together to collaborate their leprosy services, Ekiek says that without funding it would be hard to do.

“I also lead the national programme on [tuberculosis] TB and I often piggyback on the TB budget to visit our leprosy programmes in the state. But I cannot organise a meeting of the state leprosy workers because it would require about 40,000 dollars-which is too big of an amount to be extracted from another programme budget,” Ekiek explains.

Budgetary allocations aside, Micronesia also has the challenge of a lack of credible data. Clear, defined parameters of data can help paint an accurate picture of leprosy in the country, and also provide information about the exact number of new cases.

In addition, a database of all the people affected by leprosy, and those who are undergoing treatment, can be created to make the information easily accessible.

Because without credible data, there is currently no uniformity in the statistics provided by the national and the state programmes.
“We received 89 new cases in 2018. This year, between January and March, we have seen 35 news cases,” Keller informs.
But according to Ekiek, there were probably just 75 new cases in 2018.
“Honestly, we cannot be sure because we don’t have a clear database yet. We don’t have a trained data analyst or staff who is skilled to compile and visualise statistics,” she admits.

While the confusion among the different government agencies continues, some experts feel that it is because of a lack of coordination and that a review of the national leprosy programme is overdue.

“The national leprosy programme has not been reviewed for a long time, so we don’t know what is working and what is not. Maybe they need a complete overhaul of the system or maybe they just need some training in data, records and office management,” says Dr. Arturo Cunanan, a world leprosy expert and chief of Cullion Sanitarium and General Hospital in Philippines. Cunanan, who is also recipient of the Gandhi Peace Prize for his work with leprosy, was visiting Micronesia with the Sasakawa Health Foundation/Nippon Foundation to review the current progress in eliminating leprosy.

“But without that review of the current programme, a true need assessment is not practically possible,” Cunanan, who has trained several health department staff across Micronesia region, including Ekiek, says.

* Additional reporting and writing by Nalisha Adams in Johannesburg