Sunday, Jan. 26, is World Leprosy Day, which is observed to raise awareness about the disease and those affected by it. IPS Senior Correspondent Stella Paul looks at how the disease is re-emerging as a global health challenge, particularly in countries like India, Brazil and Indonesia. 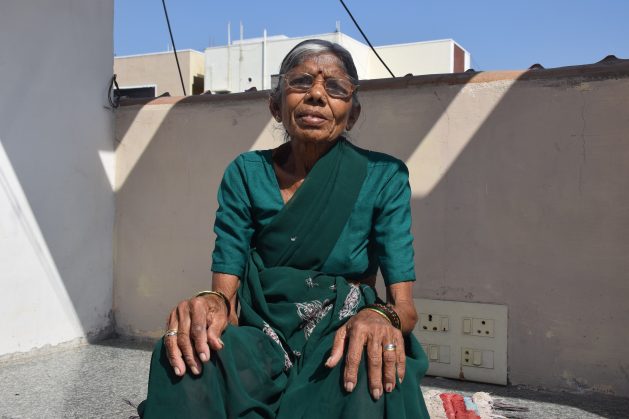 Sattamma, a daily labourer in the Rangareddy district of southern India’s Telangana state, says that even though she no longer has Hansen’s Disease, she remains discriminated against because of it. Credit: Stella Paul/IPS

HYDERABAD, India , Jan 23 2020 (IPS) - Fifteen years ago, Sattamma – a daily labourer in the Rangareddy district of southern India’s Telangana state – was abandoned by her husband after she was diagnosed with Hansen’s Disease.

Last October, while her neighbours were celebrating Diwali, Sattamma was homeless again as her landlord threw her out of the house after he discovered her past disease.

“My husband said I was a danger to him. But it was so many years ago (I had leprosy). I have been cured and living without any scar or pain. Why would anyone still treat me like this?” asks a visibly-perplexed Sattamma who says finding work has become harder since her eviction.

Discrimination against leprosy, however, isn’t experienced by a scattered few: the world over, men and women affected by leprosy are increasingly being subjected to stigma and bias regardless of their current health status.

In Nigeria, Lilibeth Nwakaego runs a non-profit organisation called Leprosy Disability Initiative, which provides legal and emotional support to the leprosy-affected people who have been stigmatised by society. According to her, the roots of stigma are so deep, it often frustrates even the most determined.

“As a lawyer and a woman, I can tell you this: leprosy-affected people like me are sent straight to hell once the community discovers about our sickness. It is meaningless and cruel but it exists and it is continuously increasing,” she tells IPS.

“The discrimination towards leprosy-affected is like leprosy itself: you fight it in one place and end it, but it surfaces in another.”

Re-emergence of an “eliminated” challenge

In 1993, multi-drug therapy (MDT) was introduced worldwide which has since reduced the prevalence of Hansen’s Disease by more than 99 percent. As a result, most countries announced they had eliminated the disease – this is a target of less than one case per 10,000 people as set by the World Health Organisation.

However, almost a decade later, new cases are continually surfacing globally, including in India, Brazil and Indonesia – the world’s three-most affected countries.

However, each of these countries has reported high levels of stigma and discrimination – experienced by leprosy-affected people.

In the last decade, India has also seen a rise in several potentially deadly diseases, including tuberculosis, heart disease, diabetes and diarrhoea. Compared to this, the number of leprosy cases is truly minuscule. Yet the social stigma and bias against the leprosy-affected is extremely high, courtesy of a large number of laws which allow and aid such acts, says Vagavathalli Narsappa – head of Association for Leprosy-Affected (APAL) – a pan-Indian organisation based in Hyderabad.

“The irony is that when it comes to stigma, the law is truly equal for all. For example, a leprosy-affected person cannot contest a local election, or, can be forcibly removed from office even after winning. It is as if you have committed a violent crime…This is even more ridiculous because such a person can contest state/national elections,” Narsappa tells IPS.

The government seems to be well-aware of  the discriminatory laws as well. In August 2019, India’s health minister Harsh Vardhan wrote to his colleagues in the law and justice, and social justice and empowerment ministries seeking the amendment of 108 laws that discriminate against persons affected by Hansen’s Disease.

“Even though the disease is now fully curable, it is disturbing to learn that there still exist 108 discriminatory laws against persons affected by leprosy, including three Union and 105 state laws. The National Leprosy Eradication Programme (NLEP) has achieved enormous success in leprosy control, particularly in the last four decades,” the health minister said in a letter shared with the media.

However, little has been done since then, says Narsappa.

“The only big step that we saw is repealing the law which allowed divorce on the ground of leprosy,” he tells IPS, referring to the Elimination of Discrimination against Persons Affected by Leprosy (EDPAL) Bill – commonly known as the Divorce Bill — which was passed by India’s parliament in February 2019.

In Indonesia, the social discrimination has been discouraging the leprosy-affected from seeking treatment, says Al Qadri, deputy head of the Leprosy Association (Permata), an NGO that works for the welfare of leprosy patients.

“Because of embarrassment and  fear of stigma, those who are suffering from the disease do not go to the health clinics in time. They hide until its too late and the disease has taken an advanced form,” Qadri says.

There is hope in hopelessness

In India, a portion of government jobs are reserved for persons with disabilities. However, leprosy-affected people who have disabilities are often denied the benefits of this policy. Narsappa of APAL recalls how he was denied a job with the local government.

“After being rejected three times, I visited the District Collector (a senior government official) whose office had announced a vacancy. But instead of hearing my plea, he told me, ‘you can still walk and move, why do you think you deserve this job?’ From his tone, I could sense that my past (disease) was the real issue,” says Narsappa who is now actively advocating for leprosy-affected people’s right to employment and old age pension – another government program which often fails to reach the leprosy-affected.

A strong ground movement is also in the making for calling for the land rights of the leprosy-affected.

Maya Ranvare, an executive member of APAL who is leading the movement in Maharashtra state of western India, says that though there are over 70 colonies across India, few of the residents have an individual ownership.

“Our cities are expanding so fast! We worry that tomorrow, our land will be grabbed by illegal real estate developers and we will not be able to do anything,” Ranavare tells IPS.

Activists like Ranavare are now approaching the state human rights commission to instruct the government to give land ownership certificates to leprosy colony residents. Last month, in Ratnagiri – a neighbouring district, the government started the process after being instructed by the commission, she reveals.

“Our fight today is the fight for our basic rights to equality, employment and land. But we also need a set of common, fair laws that makes all of these possible,” says Ranavare.