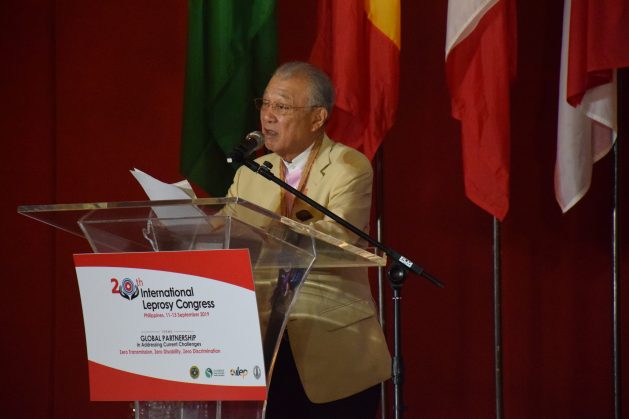 MANILA, Sep 11 2019 (IPS) - Forty years ago, Yohei Sasakawa saw his father moved to tears after meeting and witnessing the suffering of people affected by leprosy – also known as Hansen’s disease. Not only did the patients have a physical illness, but they also suffered from social exclusion and discrimination. It made the young Sasakawa vow to work for the elimination of leprosy from the world – just as his father had been doing.

Decades later, after visiting 120 countries and having meetings with countless policy makers and state leaders, Sasakawa – now the World Health Organisation (WHO) Goodwill Ambassador  for Leprosy Elimination – is delivering on his promise.

At the first day of the 20th International Leprosy Congress (ILC), being held in Manila, Philippines, the chairperson ofThe Nippon Foundation (TNF) called for activists, scholars and those affected the globe over, to rally behind the goal of a world free of  stigma, discrimination and violation of human rights of those affected by leprosy. The ILC, which ends Sep 13, is supported by TNF sister organisation the Sasakawa Health Foundation (SHF).

Sharing his experiences, he recalled how he, TNF and SHF lobbied the United Nations to recognise the elimination of stigma against leprosy-affected people as a human rights issue.

Sasakawa reminded delegates that it was a tough journey against several odds as policy makers and diplomats  showed little interest in the human rights of leprosy-affected people. He told the congress how during a 2003 U.N. Human Rights Council meeting in Geneva, only five members attended the event to discuss stigma as a human rights violation in a room that could accommodate 50.

Not one to give up, Sasakawa kept pursuing the issue until finally in December 2010 the U.N. General Assembly unanimously adopted the resolution on elimination of discrimination against persons affected by leprosy and their family members and accompanying principle and guidelines was passed.

“I believe the elimination has been an important milestone in my journey,” Sasakawa said.

But despite the U.N. resolution and various local laws at country level worldwide abolishing policies like segregation and isolation of the leprosy-affected, society still stigmatises and discriminates against Hansen’s disease patients as well those who work within the field, like health care workers etc.

He said one example of this remains is the classification of leprosy as a neglected tropical disease.

“I would like to express my opposition to leprosy being considered as one of the neglected tropical diseases. Leprosy has never been neglected even for a moment by both persons affected and by people who have worked hard for their betterment. In my opinion, this medical terminology feels like it is looking down on the patients and also shows a lack of respect towards those are fighting against leprosy today. Leprosy is an ongoing issue.” 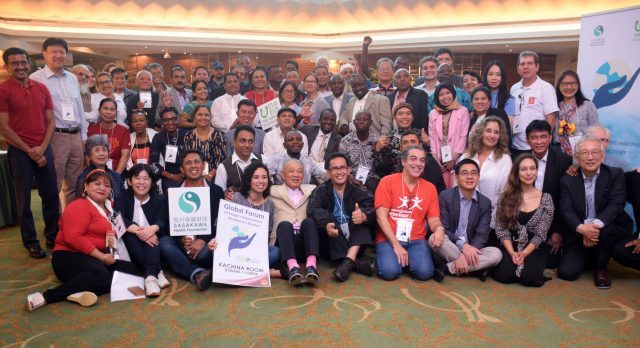 Participants from organisations focused on assisting Hansen’s disease-affected people from Asia, Latin America and Africa with World Health Organisation (WHO) Goodwill Ambassador  for Leprosy Elimination, Yohei Sasakawa (centre pink socks). Participants were attending the Global Forum of People’s Organisations on Hansen’s disease in Manila, Philippines, which was sponsored by the Sasakawa Health Foundation and The Nippon Foundation. Credit: Stella Paul/IPS

However, Sasakawa also acknowledged that in other areas — such as the partnerships and networking — there has been great progress. The Global Partnership for Zero Leprosy network was a significant step forward.

“The  collaboration will greatly enhance our work towards achieving ‘Zero Leprosy,'” he said, adding that the strengthening of these partnerships, especially with the governments, was crucial to reach the common goal of a leprosy-free world.

“Whenever I go abroad, I always meet with the national leaders of the countries. We cannot solve the issue of leprosy without their understanding and support. Without their support, we cannot secure the budget for activities to eliminate leprosy and the associated discrimination,” he reminded the congress.

Rachna Kumari, of International Federation of Anti-leprosy Associations or ILEP, who is based in Munger in Eastern India’s Bihar state, told IPS: “We cannot end stigma just by treating leprosy as a health issue.”

If only health workers are assigned to work on leprosy, they will work on medication. That is not enough to solve the problem we face. So, we need education. Government must include information on leprosy in school books. There must be billboards and large posters which can educate both patients and healthcare workers. Only with such a holistic approach we can win this,” Kumari said.

Earlier, delivering the keynote speech, the Philippine Secretary of Health Francisco Duque asserted that his government remains serious about respecting the rights of leprosy-affected people.

“The vision of our Universal healthcare for the Filipino people is deeply tied to the aspirations of the 2016-2020 global strategy for the leprosy and goal number 3 of the SDGs or the sustainable development goals. We remain committed to these goals and aspirations. We are committed to zero stigma, zero disability, zero transmission and  zero disease,” Duque told the congress.

Duque also stressed the importance of partnerships to achieve the goals yet unmet.

“We are only a  few months away form 2020 and our midterm strategy is only getting underway. We must work together. This year’s conference emphasises the need for partnerships to create a world without leprosy. And our success and your success may define the relations we have made and continue to make.

Acknowledging stigma as a “barrier for early detection and treatment“ of leprosy, Huong Thi Giang Tran, WHO’s Director for Disease Control in the Western Pacific also said that stigma limits the opportunity for life and leads to social and economic exclusion. She called for the addressing of stigma at the policy level.