Yohei Sasakawa, Chairman of The Nippon Foundation, has served as WHO Goodwill Ambassador for Leprosy Elimination since 2001. He is part of Sasakawa Leprosy (Hansen’s Disease) Initiative, which has organized the “Don’t forget leprosy” campaign.

Jan 28 2022 - Sasakawa Leprosy (Hansen’s Disease) Initiative is collaborating with 32 organizations from 13 countries to promote the message “Don’t forget leprosy” in the run-up to World Leprosy Day on January 30. The international campaign includes awareness-raising events and outreach to governments and is being publicized via newspapers, television, radio, and social media.

Based in Tokyo, Japan, Sasakawa Leprosy (Hansen’s Disease) Initiative launched the “Don’t forget leprosy” campaign in August 2021 to ensure efforts against leprosy, also known as Hansen’s disease, are not sidelined amid the coronavirus pandemic.

The Initiative’s Yohei Sasakawa, who serves as WHO Goodwill Ambassador for Leprosy Elimination, said: “The impact of the coronavirus pandemic has been particularly hard on persons affected by leprosy and their families who were in a vulnerable situation to begin with. Lockdowns and other measures to prevent the spread of the virus have caused many problems at the field level, making access to medical services difficult, causing loss of livelihoods, and exacerbating the difficulties that persons affected by leprosy already encounter due to stigma and discrimination. They must not be forgotten.”

From India, which accounts for around 60% of all new cases of leprosy diagnosed globally each year, 13 8 organizations are participating. Activities include intensive awareness-raising events aimed at school children and university students to provide young people with correct knowledge about leprosy and help prevent discrimination from taking root.

In Brazil, the country with the second-highest number of annual new cases and which has yet to eliminate leprosy as a public health problem (with elimination defined as a prevalence rate of less than 1 case per 10,000 population), the campaign is being carried out by more than 2,000 persons affected by leprosy and volunteers from MORHAN (the Movement for the Reintegration of Persons Affected by Hansen’s Disease). Activities include a focus on healthcare professionals and involve training local public health nurses, strengthening the functions of leprosy referral centers and case-finding.

Activities for World Leprosy Day by Sasakawa Leprosy (Hansen’s Disease) Initiative
The Initiative has launched a special website (https://gasasakawa.org/) for the Global Appeal to End Stigma and Discrimination against Persons Affected by Leprosy. Inaugurated by Sasakawa in 2006 and released in conjunction with World Leprosy Day, the annual Global Appeal underlines the messages that leprosy is curable, treatment is available free of charge throughout the world, and that social discrimination has no place.

As side events of this year’s Global Appeal, the Initiative is hosting two webinars on raising awareness of leprosy (“The role of health professionals at the grassroots level” and “The role of young people: sharing discussions from three regions”) as well as a photo contest on social media. A selection of the best photos, which depict the daily lives of persons affected by leprosy and relief activities, will be displayed on the Global Appeal website.

In addition, Sasakawa has posted a message for World Leprosy Day on the WHO website.

About Sasakawa Leprosy (Hansen’s Disease) Initiative
The Initiative is a strategic alliance between WHO Goodwill Ambassador for Leprosy Elimination Yohei Sasakawa, The Nippon Foundation and Sasakawa Health Foundation for achieving a world without leprosy and problems related to the disease. Since 1975, The Nippon Foundation and Sasakawa Health Foundation have supported the national leprosy programs of endemic countries through the WHO, with support totaling some US$200 million to date. In cooperation with the Japanese government and other partners, the foundations have played an important role in advocating with the United Nations, helping to secure a 2010 UN General Assembly resolution on the elimination of discrimination against persons affected by leprosy and their family members and the appointment of a UN Special Rapporteur on leprosy by the UN Human Rights Council in 2017.

About leprosy
Leprosy, also known as Hansen’s disease, is an infectious disease that mainly affects the skin and peripheral nerves. Around 200,000 cases are newly reported each year. Leprosy is curable with multidrug therapy, but left untreated can result in permanent disability. An estimated 3 to 4 million people in the world today are thought to be living with some form of disability as a result of leprosy. Although completely curable, many myths and misunderstandings surround the disease. In various parts of the world, patients, those who have been treated and cured, and even their family members continue to be stigmatized. The discrimination they face limits their opportunities for education, employment, and full participation in society. 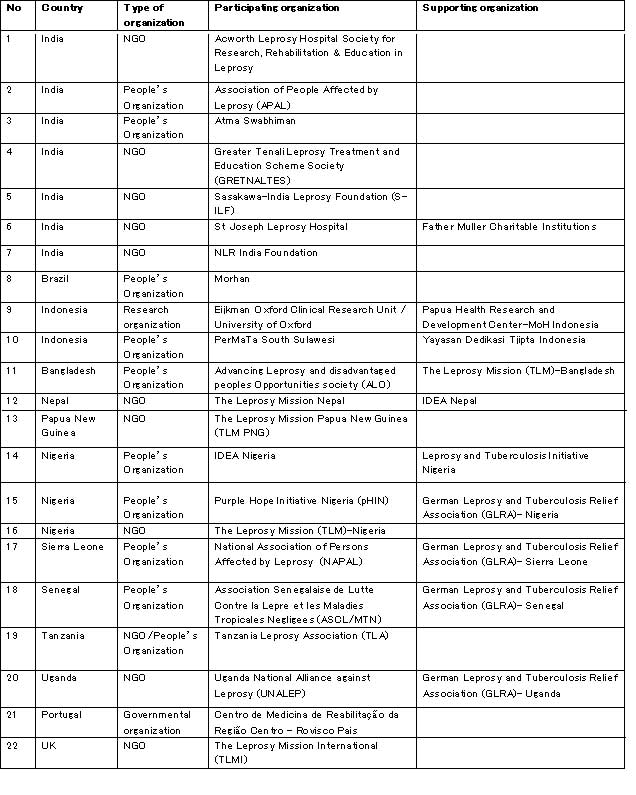