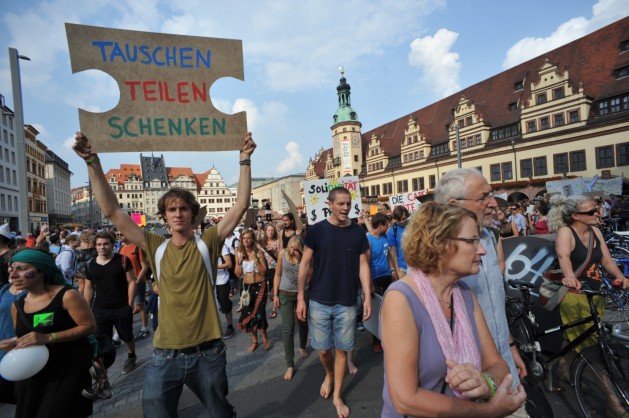 LEIPZIG, Sep 22 2014 (IPS) - From the mid-20th century onwards, economic growth has come to count as a self-evident goal in economic policies and GDP to be seen as the most important index for measuring economic activities.

This was the premise underlying the recent Fourth International Conference on Degrowth for Ecological Sustainability and Social Equityheld in Leipzig to take stock of the “degrowth” movement’s progress in efforts to debunk the mantra of growth and call for a fundamental rethink of conventional economic concepts and practices.

Many followers of the movement, who argue that “anyone who thinks that growth can go on endlessly is either a crazy person or an economist”, base their philosophy on the findings of a 1972 book – The _Limits_to_Growth – which reports the results of a computer simulation of exponential economic and population growth with finite resource supplies.

“In China, which is touted as a success story of economic growth, 75 percent of the results of this growth serves only 10 percent of the population, while the enormous Chinese urban centres have become so polluted that even the government would like to build eco-cities” – Alberto Acosta, economist and former President of the Constitutional Assembly of Ecuador

After Paris (2008), Barcelona (2010) and Venice (2012), this was the fourth such conference but, with some 3,000 participants, the largest so far. Hundreds of workshops, roundtable discussions and films or presentations were organised for the scientists, researchers, activists and members of non-governmental organisations (NGOs) who gathered to discuss economic degrowth, sustainability and environmental initiatives, among others.

Internationally acclaimed Ecuadorian economist Alberto Acosta, who was President of the Constitutional Assembly of Ecuador in 2007-2008 told participants that in China, which is touted as a success story of economic growth, 75 percent of the results of this growth serves only 10 percent of the population, while the enormous Chinese urban centres have become so polluted that even the government would like to build eco-cities.

Acosta, who developed the Yasuní-ITT initiative, a scheme to forego oil exploitation in Ecuador’s Yasuní National Park, is also an advocate of buen vivir, arguing that extractivism is one of the most damaging practices linked to latter day capitalism, as more and more non-renewable natural resources are taken from the earth and lost forever, while producing gigantic quantities of harmful emissions.

To counter extractivism, Acosta calls for the adoption of buen vivir, which is based on the Andean Quechua peoples’ sumak kawsay (full life) – a way of doing things that is community-centric, ecologically-balanced and culturally-sensitive – and loosely translates as “good living”.

For Giorgos Kallis, an environmental researcher and professor at the University of Barcelona, degrowth needs to provide a space for critical action and for reshaping development from below, in an attempt to divert more time away from a capitalist and towards a care economy.

When asked if the concept of degrowth was not too radical or uncomfortable a message, Kallis said: “Yes, perhaps degrowth doesn’t sit well, but that is precisely the point, to not sit well – it is time to make this message relevant.”

Canadian author and social activist Naomi Klein, known for her criticism of corporate globalisation and author of No Logo – which for many has become a manifesto of the anti-corporate globalisation movement – joined the conference by Skype to tell participants that radical change in the political and physical landscape is our only real possibility to escape greater disaster and that reformist approaches are not enough.

One of the main driving forces behind the degrowth movement is Francois Schneider, one of the first degrowth activists who promoted the concept through a year-long donkey tour in 2006 in France and founded the Research and Degrowth academic association.

“Systemic change involves whole segments of society,” Schneider told IPS. “It doesn’t involve just one little part and we don’t expect a new decision from the European Parliament that will change everything. Dialogue is the key. And putting forward many different proposals.”

Vijay Pratap, Indian activist from the Gandhi-inspired Socialist youth movement era and member of South Asian Dialogues on Ecological Democracy (SADED) pleaded for the inclusion of marginalised majorities in the degrowth movement. Pratap told IPS that “unless we initiate the processes so that they can become leaders of their own liberation, no real post-growth society can come into being.”

While he was satisfied with what he said as a very egalitarian and democratic approach to the organisation of the conference, Pratap said that inclusion should be guaranteed for those who do not speak English, those who do not know how to navigate social networking sites and those who do not have access to international philanthropic donor agencies.“

According to Pratap, who participated as an organiser in the World Social Forum (WSF) gathering in Mumbai in 2004, this was one major lesson of the WSF process.

On the final day, Lucia Ortiz, a programme director for Friends of the Earth International and active in Brazilian social movements, did not mince her words in the closing plenary when she proclaimed that “degrowth is the bullet to dismantle the ideology of growth.”

The movement to dismantle this ideology will now continue in preparation for the next degrowth conference in two years’ time.

And Kallis is convinced that it will be even more successful than this year’s event. Commenting on the increase in participation from a few hundred in Paris in 2008 to the 3,000 in Leipzig, he quipped: “At this pace, in twenty years, we’ll have the whole world at our conference.”