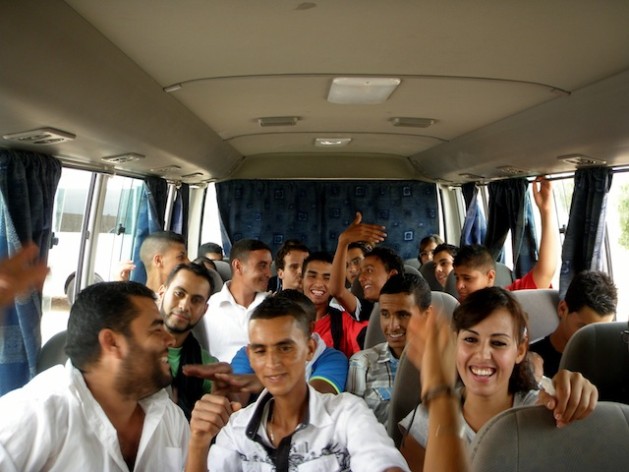 A youth delegation from Tunis heads to the countryside to spread the word of the World Social Forum. Credit: Monika Prokopczuk/IPS

TUNIS, Mar 22 2013 (IPS) - In the final countdown to this year’s World Social Forum (WSF), Tunisian civil society and the country’s capital, Tunis, prepares for an influx of over 50,000 visitors. With the dates of the forum set for Mar. 26-30, uncompleted tasks are being fast-tracked while the university campus that will host the forum is being given a security face-lift.

The biggest question on the minds of the organisers and their international guests is the security situation in the country. It was only last month, on Feb. 6, that popular left-wing politician Chokri Belaid was murdered near his home in Tunis. His death led to political uncertainty and eventually the resignation of Prime Minister Hamadi Jebali, as well as protests on the street.

Legitimate concerns that the country might slip into turmoil and instability have spread fast and are keeping visitors at bay.

“We get many emails every day from people who are worried about this,” said Haifa Nakib, who is in charge of logistics and administration of the WSF. “I tell them: ‘Don’t believe all the hype on TV! Tunisia is not at war and the situation here is peaceful. There is no terrorism here, in fact the government is even going to secure the location’.”

The government is indeed cooperating fully with the organisers of the massive gathering, and has even deployed a security team to locations surrounding the campus, which organisers hope will be “discreet”.

Cheima Ben Hamida, a volunteer coordinator, informed IPS that security would also be provided to organisers inside the campus. She is further comforted by the fact that the government “has instructed all its ministries to aid the WSF to the fullest extent possible”.

Meanwhile, enthusiasm over the event is at full throttle. Over 4,500 organisations from over 85 countries have registered. France and Tunisia top the list of participants: each plans to have representatives from over 300 groups present. Brazil, Belgium, Italy and Morocco are also high up, with each represented by at least 50 organisations.

The U.S. is also sending its largest WSF delegation to date. With 66 groups currently registered, this marks the highest level of participation from the North American country. Canada is likewise dispatching a large contingent.

Among the many topics to be addressed and debated are women’s rights, youth and culture. Though the main theme of the Forum is the Arab Spring, other issues — from the global economic crisis to the global ecological crisis — will be given due importance.

Demonstrating their commitment to the success of the event, the Tunisian immigration authorities have made participation accessible to visitors from countries without diplomatic accords or the presence of embassies. Fresh arrivals who produce a letter of invitation will be granted an entry visa. Thus, citizens of countries like Peru or Israel will have no problem attending the meet.

The third edition of the World Free Media Forum (WFMF) will be held simultaneously, starting on Mar. 24 and carrying on throughout the entire duration of the WSF.

Several hundred media representatives are expected to participate in workshops, discussions and media coverage of the forum. A free media village has been set up for this purpose, while non-profit community radio has been targeted as a preferred media format.

Another “forum within the forum” will be an international youth camp, which will bring together young people aged 18 to 30 and provide a space to organise sports, dances, cooking competitions and debates.

Khalil Teber, a member of the youth commission and co-organiser of the youth forum, shared his excitement with IPS: “We are providing the youth with a space of their own. Activities have been planned for day and night – it will be like four days without sleep.”

“Our vision,” added Teber, “is to present Tunisian youth to the world, including the version of the Tunisian revolution as the youth see it. And we want all Tunisian youth there, regardless of their political stripes.”

Besides being a celebration of the birthplace of the Arab Spring, this year’s convergence is significant for another reason: participants plans to discuss, in detail, the future of the World Social Forum.

It is clear to all those attending and organising the event that numerous other social and grassroots mobilisations – such as the Occupy movement – continue to play a major role. While not able to replace this forum, they do point to the need for the WSF to reflect and then evolve. This entails the integration of sundry movements and initiatives into the evolutionary process of the WSF.

“If the content is effective and the social forum becomes refreshed with this edition, then it will move forward,” according to Ben Hamida.

Romdhane Ben Amor, the man in charge of communication at WSF, stressed: “What is really important is what comes after the forum. A new way of thinking needs to emerge, a new vision of the world. If the forum can help both Tunisian and worldwide social movements to build on their strengths and find new ways of cooperation, then it will have been a success.”