NEW YORK, Feb 9 2011 (IPS) - As the powerful collective energy continues to surge through Dakar, veterans of the World Social Forum (WSF) are taking a moment to examine the history, trajectory and future of the alternative global movement. 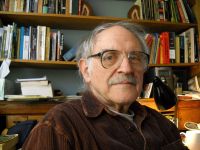 Widely considered the father of the fast-growing Ecosocialist movement, Joel Kovel has played a leading role in the WSF since 2003, following the movement from Mumbai to Nairobi to Belem.

Co-author of the Ecosocialist manifesto, which details an alternative route to humanity’s current path of environmental destruction, Kovel told IPS that we have to name this “other world” and position it firmly against the threat of global capital. Excerpts from the interview follow.

Q: What has been your role in past WSFs? A: Ecosocialism is inherently a global – not international – concept, so the WSF is an ideal place in which to discuss its main ideas. We presented the Ecosocialist manifesto in Nairobi in 2007 and revised it with a group of several hundred people. While Ecosocialism is growing magnificently in the third word, it is the fourth world – the world of the indigenous, stateless people – that is really at the forefront of this global issue.

Fourth world peoples live in communal relationships and are directly victimised by predatory oil and mining corporations that bore into the heart of the earth and destroy communities that are part of the soil. So we have depended on the unique locations of the WSF to disseminate the ideas of Ecosocialism.

Q: Does the World Social Forum sufficiently address the current ecological crisis? A: The WSF tends to focus on specific areas within the broader issue of ecocide or eco-destruction, such as genetically modified seeds or the acidification of the oceans or deforestation. While addressing these issues is certainly necessary, it is not sufficient to deal with the magnitude of the crisis, which requires a much broader diagnosis of the underlying cause of the problem.

There is very little theoretical rigor or sharpness about ecological crisis as a whole at the WSF for many reasons – people are so terrified of the crisis before us, there are so many worthwhile causes to be fought for, problems are diffuse, with different issues rooted in dispersed localities, no one can decide what the boundaries are between one crisis and another. And there are so many questions, such as when does the crisis about the oceans become a crisis about the atmosphere? Understandably, people retreat into single issues like the proliferation of plastic bottles.

Q: What can the WSF do differently to move forward in solving the crisis? A: Well there currently exists a definitional problem at the WSF. Different issues crop up which are eco-systemic disruptions – when a forest is destroyed over monoculture for example. Each eco-systemic crisis has its own site- specific and concrete reality, such as the Bhopal disaster in India. It is the collection of all these different crises, which are worsening with great rapidity, spreading outward globally and increasing exponentially, that is the real ecological crises.

If we want to find the cause for all the different systemic crises, we have to look at them together and find what is common to them all. While each problem has its own cause, virtually every single one of them is linked to capitalist expansion and can be traced to the door of a bank or an imperial power. If the WSF is to deal with this problem, is has to identify and articulate the problem of global capital, which can be thought of metaphorically – as a cancer that is metastasising. And no matter how you chose to treat the disease, you must first acknowledge that it is a reality.

Q: How has the WSF progressed since you first participated in 2003? A: Unfortunately, the WSF has a tendency to spin its own wheels, so to speak, because of the inherent limits of its slogan and motto – “Another World is Possible”, repeated over and over, becomes discouraging because the shape of that other world is never really spelled out.

However, the fact remains that the WSF is the only place in which to articulate a new reality, not just the possibility of one. Logically, we should be able to say that this “other world” is the world of Ecosocialism. But due to the nature of NGOs and their specialisation in certain crises, the WSF has not yet sufficiently named the cause of the crisis as capitalism – the forum must name the enemy and respond to it.

Q: Do you think Dakar offers the opportunity to do this? A: Absolutely. Africa is one of the most vulnerable places on earth, which is bitterly ironic given that it is the least industrialised part of the planet. The continent itself is more ravaged by the ruthless extraction of resources than anywhere else – firstly because it has resources and secondly because it lacks the protection to stop the corporations from coming in. So there is more incentive in Africa to start thinking systemically.

Dakar is also a centre of worldwide research in ecology, much more so than Nairobi, Belam and even Mumbai. The general caliber of the left intellectual presence is wonderfully high in Senegal. Despite being such a huge place, there are wonderful lines of communication between the far-flung corners of the African continent – it is very different from Asia and Europe in this respect.

Q: How can the WSF meet the challenges of the World Economic Forum occurring almost simultaneously? A: It just has to be firmly grounded in an anti-capitalist logic and practice. It is hard but it’s certainly possible. I think above all else the Social Forum provides a place where many, many tendencies can come and meet together under the realisation that their separate troubles are not random but systematic, and have to do with the penetration of empire and global capital into every corner of the earth.

To use a medical analogy, if you have a patient with a tumor in her pancreas, it can only be dealt with once the doctors can agree that it is a cancer. They can then put their heads together and come up with ways to cure it – and there are many, many ways to cure it.