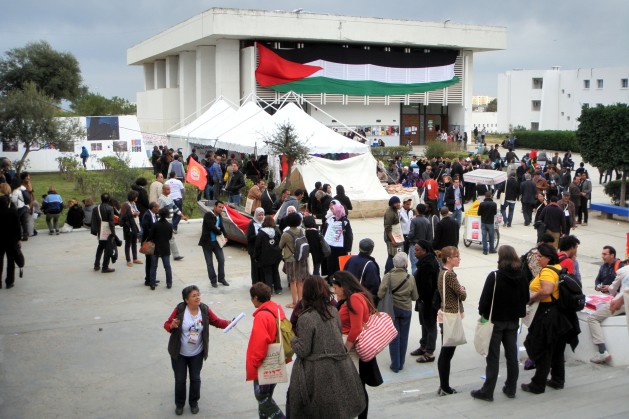 TUNIS, Apr 4 2013 (IPS) - The conference drew both supporters and opponents of Syrian President Bashar al-Assad; conflicting opinions about the Polisario Front and the politics of Western Sahara; Palestinian activists and the Jewish Anti-Zionist Network. In short, the 13th edition of the World Social Forum, held in Tunis on Mar. 26-30, was a melting pot of struggles and a search for common ground.

To the thousands of participants gathered in Tunis – where determined public protests toppled former dictator Zine El Abidine Ben Ali in January 2011 – it was clear that a key function of the annual meeting is to build solidarity across movements for peace, justice and freedom.

Widely recognised as the cradle of the Arab Spring, Tunis was selected as the site for this year’s WSF in part to pay homage to the deceased fruit vendor, Mohamed Bouazizi, whose self-immolation sparked the Tunisian revolt and the ongoing Arab Spring.

Together in what is now an iconic city, over two years after the Tunisian revolution, activists reaffirmed their commitment to international unity.

“Our mission is to create a new form of solidarity, which is opposite to competition and exists to engender equities,” Mamdouh Habashi, member of the Egyptian Socialist Party and the South-South People’s Solidarity Network, told IPS, calling this “the spirit” of South-South cooperation.

The network comprises numerous grassroots movements throughout the world, and sees itself as a champion of democracy, equated here with people’s power and social progress.

Those struggling in countries like Angola or Zimbabwe, for example, are largely cut off from the rest of the world. “They can easily be killed and no one says anything – but if they are connected (to international networks), they have protection,” she said.

Representing the International Alliance of Inhabitants, Mike Davies stressed the need to have a functioning platform from which local communities can speak to the world. Problems often arise, he said, when northern NGOs mediate the voices of their constituencies, who are either forced to learn the jargon of the NGO world or get lost in the process.

“Our sole focus is to strengthen communities to (enable) them to help themselves, and not continue to be victims of charity,” Davies said.

Although the Arab Spring has inspired protest movements for democratic change around the world, not all of its outcomes are cause for celebration. The Syrian civil war, which has so far claimed over 60,000 casualties according to conservative estimates, served as a grim reminder to the WSF participants that the consequences for failing to find common ground can be catastrophic.

Sara Ajlyakin, an activist in the Syrian uprising, stressed that while the outcome of the conflict is not yet clear, it has opened up vital spaces for organising and building unity.

“It is a historical advance that can not be reversed,” Ajlyakin told IPS. “We felt the power of the streets, the collective, and no one can take that away.”

Until the Arab Spring, she said, the population of Syria had no outlet for its frustrations and grievances. “But that is gone now – if you are a woman, a worker, a student, a member of the LGBT community, whichever walk of life you come from, you can now collectively express your opinion.”

Acknowledging that conflicting visions and ideologies impact the nature of a movement of conflict, Ajlyakin dismissed the notion of “Islamists versus secularists” as a false binary.

The only binary she recognises is between “revolutionary and anti-revolutionary” activity. “The Islamists are not the devil,” she said. “By isolating them you encourage the historical mistake of the Arab Left, which equates secularism with atheism.”

“It is my job to communicate a message to political Islamists: ‘I’m not planning to eliminate you, I’m a part of you, you’re a part of me, but you also can’t isolate me’,” she said, echoing the conference’s theme of sowing unity, rather than division.

In the true spirit of international solidarity, the Palestinian cause took centre stage at the Forum, with the concluding event consisting of a march through Tunis that ended at the Palestinian embassy to commemorate Palestinian Land Day.

According to Amjad Shawa, director of the Palestinian Non-Governmental Organisations Network, it was “fully apparent” that the Palestinians were in the minds and hearts of the participants here.

“Solidarity comes from all sides,”  Shawa told IPS, naming the presence of such organisations as the Jewish Anti-Zionist Network who came to the Forum and demonstrated alongside the large Palestinian delegation.