DAKAR, Feb 9 2011 (IPS) - It is only the second time that the World Social Forum (WSF) takes place in Africa, the first one having been held in Nairobi, Kenya, in 2007. Since the start of the WSF in Porto Alegre, Brazil, 10 years ago, the organisers have been building African participation. 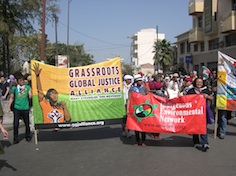 Various organisations from across the world were represented at the WSF march in Dakar, Senegal. Credit: Isolda Agazzi/IPS

The number of people attending the WSF has steadily gone up: from 20,000 to 150,000. In Nairobi it dropped to 70,000, which made some observers announce “the end of the anti-globalisation movement”.

“But one has to compare apples with apples,” says Chico Whitaker, one of the founders of the forum. “Most of the participants come from the country or the region where it takes place. Senegal has only 12 million inhabitants, compared to 180 million in Brazil. Therefore, this year we will not have a huge gathering.”

He adds that, “our original intention was not to create a new movement that would change everything but to increase the possibility of people to get to know each other and come together. Politically, we needed to change our methods. Instead of creating a pyramid based on power, we decided to launch networks.”

The WSF is still concerned with the globally dominant neoliberal dictum: “We are told that the market is the solution and that it needs to be free. But the market does not solve the problem of inequalities,” Whitaker concludes.

The WSF kicked off on Sunday Feb 6 with the traditional rally. Thousands of people marched in the city centre of the Dakar, capital of Senegal in West Africa, to reclaim food sovereignty, debt relief, trade equity, women’s rights, access to health, liberalisation of migration and many other causes aimed at fairer and more inclusive globalisation.

“The total number of participants is not known yet,” Taoufik Ben Abdallah of Enda Tiers Monde, the coordinator of the African Social Forum and one of the main organisers of this year’s event, told IPS in an interview. Enda Tiers Monde is an international development organisation with headquarters in Dakar.

“People have come from 130 countries. Many groups have arrived from all over Africa, often by bus. The participation of Asia is rather low but that is mainly due to the cost of the journey.”

Ben Abdallah welcomed participants at the Cheikh Anta Diop University by saying, “Africa is a rich region if you to let countries determine their own policies”. Asked by IPS whether the “Jasmine Revolution” could spread across Africa, Ben Abdallah answered that, “the way the Tunisian delegation was welcomed shows that what happened there is considered very significant”.

The actual work started on Feb 7 amid some confusion. Most of the workshops scheduled in the university building had to be cancelled because students were attending classes as if the WSF did not exist. The former university director had promised use of the buildings for the whole week but the current director decided not to suspend classes.

The organisers met with university authorities while tents were set up rapidly. Several workshops were relocated there. Many participants think that the Senegalese government is not making any effort to support the global event but Ben Abdallah ensures journalists that it is only an organisational problem.

Feb 7 was devoted to Africa and hundreds of self-organised workshops took place on varied issues until today (Feb 9).

For Anna Dramé of the National Council of Civil Society Organisations of the small West African state Guinea, “holding the WSF in Africa is a good thing because it gives us the possibility to exchange ideas and find solutions to common problems.

“I have been inspired by the workshops on violence against women and on land grabbing,” she told IPS. “I did not know about the situation in Mauritania and Mali and, once I am back home, I will be able to pass information along.”

For Sidibe Abou from Covire, a coordinating body that attends to victims of repression in Mauritania, “unity is strength and holding the WSF in Africa will give visibility to the problems of the unemployed, the widowed, the orphans and other excluded people. Discussing common problems may help us to find solutions.”

Nama Sidiki of Diobass in Burkina Faso, an organisation of small farmers, is also concerned about unlawful expropriation of land. “It creates conflict. In Burkina Faso, mainly rich locals and some members of government — rather than foreigners — have grabbed land. The WSF helps raise the awareness of people.”

During the last two days of the WSF (Feb 10-11), delegates attending “convergence workshops” will try to produce common positions and pave the way forward on thematic issues. As usual, the WSF will not produce any final outcome document.

“The WSF is based on a bottom-up approach. We do not want to make all people think the same,” explains Whitaker.