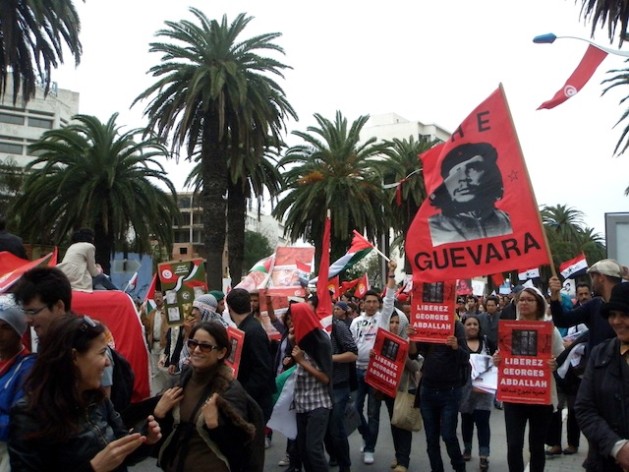 TUNIS, Apr 17 2013 (IPS) - When participants at the 2011 World Social Forum in Dakar, Senegal, received word that former Egyptian President Hosni Mubarak had stepped down, swept away by a wave of popular resistance that brought millions of Egyptians into the streets, few could contain their joy.

But euphoria was quickly replaced by doubts: what is the purpose of the World Social Forum (WSF)? Is it even relevant anymore? How does it connect with people struggling to survive, and facing the guns on the ground?

“Yet here we are two years later,” said renowned commentator and social scientist Immanuel Wallerstein at the 2013 edition of the WSF in Tunis, “invited by the very people who made this revolution, who want us here, who want us to help strengthen their internal struggle in Tunisia. Is that irrelevant?”

His question points to the need, expressed by scores of participants who gathered here from Mar. 26-30, for serious reflection on the success and direction of the WSF, which has just completed its 13th year.

Although the event was held in Tunis to honour the revolutionaries who toppled Tunisia’s former dictator Zine El Abidine Ben Ali — and set in motion a chain of similar uprisings that came to be dubbed the Arab Spring — participants continue to wonder where the Forum will go, and what it is capable of achieving.

The workshop series “Decolonising the Forum” brought into focus the discrepancies of representation and accessibility.

This year drew a clear majority of non-Westerners: of the roughly 60,000 visitors, only 8,000 came from Europe, while up to 20,000 were from Tunisia alone. Yet, traditionally, large organisations such as the anti-globalisation Association for the Taxation of financial Transactions and Aid to Citizens (ATTAC), along with Europe and North America-based NGOs, have been better able than organisations in the South to send major delegations.

Speaking on behalf of the Indian National Forum of Forest People and Forest Workers, Roma Malik recalled that the WSF started as a process to counter the negative consequences of globalisation and neoliberalism, which critics claim have created massive inequalities in the global distribution of income: just a glance at the Gini Index, which measures income inequality on a scale of 0 to 1, shows Namibia at 0.74, dangerously close to the point of “absolute inequality”, while industrialised countries like the Czech Republic, Norway and Japan hover around the 0.25 mark on the scale.

Thus, “The WSF should become less dominated by the big NGOs and efforts need to be made to bring more people to the gatherings who have less funding,” Roma told IPS.

This includes the kind of people that Roma works with, such as forest dwellers in India who are subject to land-grabbing and displacement, as multi-national corporations target these mineral-rich regions and replace natural forests with cash-crops and monocultures.

Over 1.1 million hectares of forest are under threat in the central Indian region, according to a recent report by Greenpeace entitled “Countering Coal”. Development of the Mahan coal block, located in the Singrauli district of the central Indian state of Madhya Pradesh, could alone displace 14,000 tribal people.

This comes at a time when rural dwellers in India are having to fight for their right to prevent large-scale investments from disrupting their way of life, as the Indian government recently forced a watering down of protective legislation in the so-called Forest Rights Act, once heralded as a victorious achievement for forest dwellers.

Steven Faulkner, international officer of the South African Municipal Workers Union, put the burden of addressing the challenge of representation squarely on the shoulders of the Forum’s leadership, which traditionally takes the form of the International Council (IC), a representative body of roughly 140 members.

“We need a bold leadership, which considers itself accountable to the poor and the marginalised,” he said.

Having spent several decades working on labour issues throughout Africa, Faulkner stressed the fact that the world’s poor are not passive recipients of aid but are rather active survivors of a highly unequal economic, social and political world system.

This very act of survival is a creative process that “we should be looking at more carefully”, continued Faulkner, bringing in those directly affected to share their strategies.

“If we can free ourselves from the boundaries imposed by colonialism, and become genuinely free in the manner that Nelson Mandela talked about, then we can realise one thing: Africa has enormous potential.” Tapping into this potential involves “retention of humanity” by installing political, economic and environmental relationships based on mutuality instead of competition.

Other voices at the WSF pointed to the Forum’s great unifying and renewing effect. Hassen Ltaief, an activist during the Tunisian revolution, drew huge applause from the audience when he said: “We here are not the same anymore as we were before the WSF. We came to bring a new spirit to the Forum and as I can see in the eyes of the older activists, it appears this was a true success.”

What made the forum significant, Ltaief informed IPS, was that it opened the space for the development of a collective conscience, and highlighted the importance of collaborative organising, two critical lessons for Tunisia, which is experiencing the growing pains of a new democracy and is under enormous pressure to safeguard the hard-won gains of the revolutionary period.

Now, organisers are beginning to lay the groundwork for future meetings. The IC’s plans to hold its next planning meeting in the Maghreb region has given a boost to the Maghreb Social Forum, while a decision regarding an upcoming Maghreb/Mashreq Social Forum is expected in May.

The Maghreb Social Forum has been in existence since 2005, when it was called to life in Porto Alegre by Moroccans and Tunisians. It has since developed along the lines of a regional social forum, and has made special efforts to address issues pertaining to women, youth and broadening the civil society sector in Northern Africa.

Formal proposals for the next World Social Forum are also anticipated in the near future, while currently the ideas floating around range from India to Mexico, Canada, Brazil, or even Tunisia.

“The WSF has traditionally been a nomadic experience,” said Nicolas Haeringer, a long-time participant and observer of the International Council. “It needs to grow roots, more than previously, and as Tunis provided one of the most inspiring gatherings I’ve attended, it would not be so far-fetched of an idea to hold it here again.”