ECONOMY-ZAMBIA: Hard Times on the Copperbelt

Luanshya, ZAMBIA, Jun 23 2009 (IPS) - Nowhere in Zambia is the impact of the global financial crisis being felt harder than in the copper and cobalt-rich province of the Copperbelt. 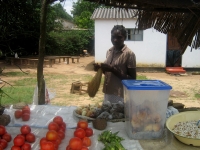 Women taking up the slack: Martha Phiri and her mother set up this stall after her father was laid off from the mines. Credit: Kelvin Kachingwe/IPS

The province has for a long-time been the goose that lays the golden egg for the country. When Zambia’s economy grows, it is because mining is booming on the Copperbelt. Copper accounts for 80 percent of Zambia’s foreign exchange earnings and has since 2003 been the main driver of an annual economic growth rate of five percent.

When the copper price enjoyed a renaissance at the beginning of this decade, the mines again became the major employers as production rose to more than 600,000 metric tonnes with government projecting one million metric tonnes by 2010.

But because of the global crisis, this projection is seen as highly unlikely. Steep fall in demand and prices for copper on the London Metal Exchange led to government collecting revenue of just 64 million dollars from copper in 2008, rather than the targeted $415 million.


In 2007, government introduced a windfall tax to ensure that the nation received a fair return from its resources, while maintaining a globally competitive mining industry. The tax was designed to match rises in the price of copper: it was set at 25 percent while copper sold for $2.50 per pound, 50 percent for the next 50 cents and increased to 75 percent when copper fetched above $3.50 per pound.

The government has now removed the windfall tax in order to salvage the mining sector.

Further, the minister of finance, Situmbeko Musokotwane, has proposed to reduce customs duty on important inputs for the industry, dropping the duty on heavy oil from 30 to 15 percent and entirely removing duty on copper powder, copper flakes and copper blisters. He has also proposed to include copper and cobalt concentrates on the import deferment scheme for Value Added Tax (VAT) purpose – all to reduce the operating costs of mining companies.

But the Trade Justice Network, which promotes socially just, democratic and progressive taxation systems in Africa, believes that despite mining companies closing and laying off workers, the government should not have reversed its tax regime.

“Given that mines do not pay windfall tax when prices are low, this proposed tax break will mean Zambians will again fail to benefit when the copper prices rise. The result means that Zambia will continue to wait for many years before mining companies contribute to the budget,” Alvin Mosioma, co-ordinator for Trade Justice Network Africa says.

Instead, Mosioma is calling for the government end the practice of granting tax exemptions to mining companies when signing contracts, and for bilateral and multilateral donors to scale up their financial assistance to Africa governments to improve their capacity to monitor and audit the accounts of mining companies.

The country’s mining companies have either reduced production or put the mines on care and maintenance, citing the global economic slump, which has seen international copper prices tumble from record highs of nearly $9,000 per metric tonne between 2005 and 2007 to about $3,000 per metric tonne. Luanshya Copper Mines (LCM), a joint venture of the Swiss-based International Mineral Resources and Bein Stein Group Resources of Israel, closed its operations in December 2008, resulting in 1,700 retrenchments.

Mopani Copper Mines (MCM) also recently retrenched up to 1,000 workers while the country’s biggest mine, Konkola Copper Mines (KCM), owned by the London-listed Vedanta Resources, laid off 700 after shutting down its smelting plant.

MCM chief executive officer Emmanuel Mutati says his firm was ill-prepared to face the global economic downturn. “Last year – and in particular the last six months – proved to be very difficult and challenging. The remedy for re-positioning ourselves has not been easy for us to take. Regrettably, some of our workmates lost their jobs and a number of contractors lost sizeable investments as we tried to reposition the company in order to meet the challenges.”

Opening Parliament in January this year, President Rupiah Banda warned the mining companies not to use the global financial crisis as an excuse to lay off workers, especially now as government had made amendments to the Mines and Minerals Act to encourage foreign direct investment in the mining sector.

On the Copperbelt, many retrenched miners have resorted to informal trading to make ends meet.

Jack Mwanza is among those that were laid off and received $7,200 as terminal benefits. The money however proved not to be enough as he was required to service a loan that he got from a local micro-finance lending institution.

“They deducted 10 million kwacha (around $2,000) from my terminal benefits. The remaining amount was used to pay school fees for my school-going children, buying food and to start a small katemba (grocery) which my wife and daughter are running, but the returns are really minimal, we’re only praying that the new owners get us back to work because clearly, we wont survive for long like this,” says Mwanza, a father of five.

Marjorie Mbewe, a mother of six whose husband was among those retrenched at Luanshya Mine, has been forced to open a makeshift stand outside her house where she is selling mostly vegetables.

“It’s become very difficult to survive now. The money my husband received wasn’t enough because he had a loan to pay. We used to have at least three meals a day, but that’s not possible anymore. If we manage two, it’s a real bonus,” Mbewe says.

Luanshya district administrator, George Kapu, says life has been difficult for most residents since the mine stopped production and retrenched the majority of its workers, leaving only a skeleton crew to prevent the closed mine from flooding.

“Yes, a number of them have lost their jobs. It’s been hard for them to make ends meet,” he says.

The closure of the mines and other companies has also limited the capacity of local authorities to effectively provide public services.

“Municipal councils throughout the province are finding it very difficult to operate as most of them depend on these companies for survival through rates and other taxes,” says Mwansa Mbulakulima, the Copperbelt provincial minister. “As a result of this, council’s are also finding it difficult to pay salaries to its workers.”

Copperbelt Energy Corporation (CEC), which supplies power to the mines on the Copperbelt, also says the closure of mines such as Luanshya and Chambishi Metals will lead to a 15 percent reduction in its turnover.

“We expect this year to be very difficult than last year,” Michael Tarney, the company’s executive director says.

But for the most residents on the Copperbelt, life without copper mining is definitely not an option at this particular time, having previously seen how quickly their cities turned into ghosts when Anglo-American Coorporation pulled-out almost a decade ago.

And for a region that has solely depended on copper mining for several decades, diversifying its economy will not be easy.

World leaders gather at the United Nations in New York this week, to consider short- and long-term responses to soften the impact of the global economic downturn on people like Marjorie Mbewe and Jack Mwanza. They are also expected to discuss changes to the international financial system to better serve the needs of all U.N. member states.