‘Why is it Easier to Find Money to Destroy People than Protect Them?’ Asks U.N. Chief 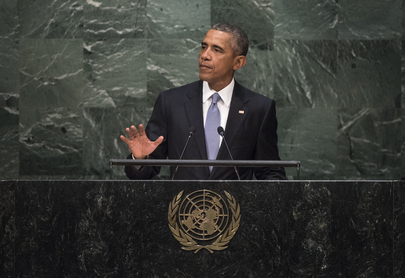 UNITED NATIONS, Sep 28 2015 (IPS) - Speaking at the opening session of the high-level debate of the U.N. General Assembly Monday, Secretary-General Ban Ki-moon said a politically troubled world is suffering from a lack of empathy.

“One hundred million people require immediate humanitarian assistance,” he told delegates, pointing out that at least 60 million people have been forced to flee their homes or their countries.

The United Nations has asked for nearly 20 billion dollars to meet this year’s needs – six times the level of a decade ago. But demands continue to dwarf funding, although member states have been generous, he said.

Still, he lamented, the global humanitarian system is not broken; “it is broke.”

“We are not receiving enough money to save enough lives. We have about half of what we need to help the people of Iraq, South Sudan and Yemen – and just a third for Syria.”

In Yemen, 21 million people — 80 per cent of the population — need humanitarian assistance.

The U.N.’s response plan for Ukraine is just 39 per cent funded while the appeal for Gambia, where one in four children suffers from stunting, has been met with silence.

Still, he pointed out, the world continues to squander trillions in wasteful military spending.

“Why is it easier to find the money to destroy people and planet than it is to protect them?” he asked delegates, who include five of the world’s major military powers: the United States, Russia, China, France and Britain.

Speaking for nearly 45 minutes, U.S. President Barack Obama covered a wide range of subjects in his address to the General Assembly.

And his appearance before the United Nations coincided with a breaking story about Russia, Iran, Iraq and Syria joining a new coalition to fight the Islamic State in the Levant (ISIL) — even while a Western coalition has been fighting a losing battle against the terrorist group.

“I’ve said before and I will repeat: There is no room for accommodating an apocalyptic cult like ISIL, and the United States makes no apologies for using our military, as part of a broad coalition, to go after them,” Obama warned.

“We do so with a determination to ensure that there will never be a safe haven for terrorists who carry out these crimes. And we have demonstrated over more than a decade of relentless pursuit of al Qaeda, we will not be outlasted by extremists.”

But while military power is necessary, the U.S. President argued, it is not sufficient to resolve the situation in Syria.

“Lasting stability can only take hold when the people of Syria forge an agreement to live together peacefully,” he said.

Obama said the United States is prepared to work with any nation, including Russia and Iran, to resolve the conflict.

“But we must recognize that there cannot be, after so much bloodshed, so much carnage, a return to the pre-war status quo.”

Asked to react to Obama’s speech, Ray Offenheiser, president of Oxfam America told IPS, President Obama showed renewed interest in engaging on a peace process for Syria – one that includes Iran and Russia.

“We’re hopeful that when he returns to Washington it is with the intention to remain personally engaged in a peace process. His words were welcome but they must be followed by action.”

He said a ‘fate worse than death’ is how some of the four million Syrian refugees, now registered in countries neighboring Syria, describe what it’s like to watch the towns and cities they left behind crumble under mortar attacks and barrel bombs.

“What is needed urgently is an inclusive peace process — pressure on the parties to end indiscriminate attacks and allow greater access to humanitarian assistance,” Offenheiser said.

“We welcome Obama’s recent announcement that the U.S. will take more refugees, but remain concerned that the pace and scale of the U.S. response is nowhere near enough. We urge the United States to resettle at least 100,000 Syrian refugees in the coming fiscal year.”

The U.S. can and should do much more to provide refuge and safety to the millions of Syrians displaced by the conflict, he declared.

Speaking of the U.N.‘s track record over the last 70 years, Brazilian President Dilma Rousseff listed some of the world body’s successes and failures.

She said the United Nations has broadened its initiatives, incorporating the 2030 Agenda and the Sustainable Development Goals, incorporating issues related to the environment, poverty eradication, social development and access to quality services.

Matters such as urban challenges and gender and race issues have become a priority.

Still, she said the Organization has not had the same success, in addressing collective security, an issue which was present at the U.N.’s origins and which remains at the center of its concerns.

She said the proliferation of regional conflicts – some with high destructive potential – “as well as the expansion of terrorism, that kills men, women, and children, destroys our common heritage and displaces millions of people from their secular communities, show that the United Nations is before a great challenge.”

“One cannot be complacent with barbaric acts such as those perpetrated by the so called Islamic State and other associated groups.”

This situation explains, to a large extent, the refugee crisis that humankind is currently experiencing, Rousseff said.

A significant portion of the men, women and children who perilously venture the waters of the Mediterranean and painfully wander along the roads of Europe come from the Middle East and Northern Africa, from countries which had their state institutions de-structured by military action undertaken in contravention of international law, thereby opening space for terrorism, the Brazilian President noted.