Q&A: Rodney Sieh on how Liberia’s press is faring under Weah presidency 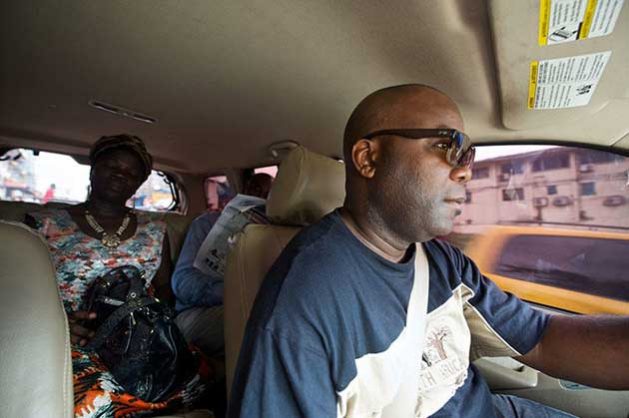 FrontPageAfrica publisher Rodney Sieh, pictured on his release from prison in November 2013. Sieh says journalists in Liberia continue to face threats and harassment for their critical reporting. (AP/Mark Darrough)

Jan 29 2019 - (CPJ) – Rodney Sieh, editor-in-chief and publisher of Liberian investigative outlet FrontPageAfrica, knows first-hand the harassment and risks critical journalists in his country face. In 2013, CPJ documented how he was sentenced to prison over unpaid fines in a criminal defamation case.

Sieh served three months of the 5,000-year sentence before being released after an international outcry. He has written about his experiences in his book, Journalist on Trial: Fighting Corruption, Media Muzzling and a 5,000-Year Prison Sentence, published in late 2018.

Sieh told CPJ this month that he and his journalists continue to be targeted. He is currently working with the London-based Media Legal Defence Initiative to file a lawsuit at the Economic Community of West African States (ECOWAS) Court of Justice in Nigeria over the harassment of his newspaper, staff, and other media in Liberia.

Sieh, a member of CPJ’s Africa advisory group, spoke with CPJ about his experiences and the current climate for Liberia’s press in the year since George Weah became president.

[This blog has been edited for length and clarity]

Looking back on President Weah’s record so far, would you describe his administration as a friend or enemy of press freedom?

To be honest, it is rather difficult to say whether President Weah is a friend or an enemy to the press. Personally, I was grateful that he paid me a visit during my incarceration when I was sentenced to 5,000 years in prison. As head of the leading opposition party, I think his visit showed that he means well and his presence showed a commitment to free press and a means of identifying with me during my struggles with the former regime of President Ellen Johnson-Sirleaf. However, since assuming the mantle of authority of the country, I have been a bit disappointed over the manner in which some of his supporters and officials of government have come after me and my newspaper for simply reporting the ills in society such as corruption, greed, misuse of public resources, the president’s failure to declare his assets, and the construction of several multi-million dollar properties.

I would like to hold him to his word that he is committed to a free press and want to believe that he is sincere and is truly a friend–and not an enemy of the press, but the actions and public statements he has made in recent time by labeling journalists as “enemies of the state” makes it difficult to conclude that this administration is sincere about its relationship with the press.

How does Weah’s record on press freedom compare with that of his predecessor, Sirleaf?

On paper, Sirleaf signed Liberia on to the Table Mountain Declaration, which calls for the repeal of criminal defamation and insult laws across the African continent. In reality, my 5,000-year sentence blemished that. Sirleaf herself was critical of investigative reporting and her supporters were often found on social media attacking critical media and journalists when stories did not sing to the government’s tone. I would though give Sirleaf the edge on the level of tolerance. She managed to withstand a barrage of criticisms and investigative reports. She had a tough skin on that end, something I think President Weah and his officials and followers could take a cue from. President Weah’s labeling of the press and critics as “enemies of the state” and investigative reports as “fake news” in the shadows of U.S. President Donald Trump, in my view, dampened whatever efforts or overtures he is trying to make toward the press in his quest to soften some of the negative reporting against his government.

The government invited David Kaye, the U.N. Special Rapporteur, to visit Liberia in March 2018. In his subsequent report, Kaye identified the decriminalization of defamation and the transformation of the state broadcasting system as a priority. Has the Weah administration followed through on any of this?

Looking at the tone of unfriendliness toward the media I have seen so far, I don’t see this government working toward making the state broadcaster independent. The president and his supporters, including senior officials, are more keen to hear positive and favorable stories being reported than having critical and constructive critical reporting. So, the idea put forward by Mr. Kaye is a good one and it’s been floated around for some time, but I do not see any signs of it being implemented in the near future. On a lighter note, we are all still eagerly anticipating full passage of the bill aimed at decriminalizing speech. Sirleaf initiated the process but it remained lingering in the corridors of the national legislature. It has been fine-tuned under Weah and renamed in memory of the late Press Union of Liberia president, Abdullai Kamara. The Lower House has signed off on it and the Senate is weighing in before it hits the president’s desk. If it does complete the process, it would be a landmark for the press in Liberia.

Information Minister Lenn Nagbe suspended all new broadcasting licenses issued from January 1 to June 18, 2018. What do you believe was the reason for this and what has happened since?

I really believe this strategy was aimed at broadcast journalist and talk show host Patrick Honnah, who was on the verge of launching Punch FM. Honnah, a former deputy managing director of Liberia’s state radio, was openly critical of Weah during the election campaign, because he felt he was anti-media. He had met all the requirements, registered his entity, and did all that is required by the government, only for the Ministry of Information to come out with that pronouncement. It is saddening to note that several new radio stations and newspapers have opened since that mandate, but Punch FM has not hit the airwaves. This is one of the reasons why I said earlier that the government is not sincere in its quest to make amends with the press.

[Editor’s Note: Nagbe did not respond to CPJ’s request for comment on January 29, and also at the time of the license suspension.]

The Minister of State for Presidential Affairs last year called FrontPageAfrica a criminal entity and said he would sue for defamation. Has he followed through on this and what does the president have to say?

The president has not said anything about those threats made by his senior minister, who is considered to be one of the most powerful members of his Cabinet. We are still waiting to receive the writ or summons from the court. I’m used to being labeled a criminal, so I am not deterred. All this has done is make me much stronger in my resolve to continue speaking truth to power. FrontPageAfrica has a track record of exposing corruption, we have a track record of holding government feet to the fire, and we have a track record of ensuring that the voices of those languishing at the bottom of the economic ladder are heard.

What other threats does your paper, or Liberia’s press as a whole, face?

The most visible these days [are] threats on Facebook and other social mediums. Late last year [government sympathizers] went as far as posting a photograph of my home on Facebook, I guess to give sympathizers of the government ammunition or motivation to attack me. They’ve tried everything, including creating fake Facebook profiles in my name with attacks on the president aimed at stirring anger among the president’s sympathizers to come after me. I have made several inquiries to Facebook but so far nothing has been done. One of the fake pages in my name has been removed, but at least two others are still there–the last time I checked. Social media is good, but the emerging trend has made journalists like me easy targets for those in power.