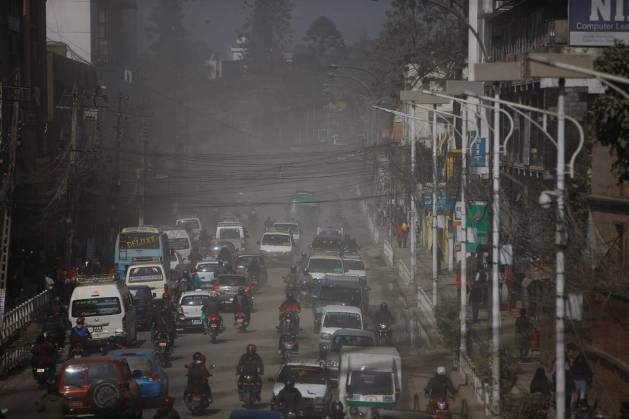 KATHMANDU, Dec 2 2020 (IPS) - The global pandemic hijacked 2020 and reset priorities, but countries now need to regroup and renew their commitment to cap global warming at well below 2°C above pre-industrial levels, as agreed in Paris in 2015.

On 12 December, it will be the fifth anniversary of the signing of the landmark climate accord when 196 countries, including Nepal, will be presenting their Nationally Determined Contributions (NDCs) to reduce the impact of the climate crisis.

NDCs are voluntary commitments by countries to reduce their carbon footprints, but there are fears that a world in the throes of a Covid-19 induced economic crisis will follow through on past commitments—even as scientists warn that the earth is warming much more rapidly than forecast five years ago in Paris.

The Himalaya is literally a hotspot because the mountains are warming faster than the global average. But activists say Nepal’s own ‘Enhanced NDC’ does not go far enough in mitigating carbon emissions, or adapting to the impact of the climate emergency.

The Himalaya is literally a hotspot because the mountains are warming faster than the global average. But activists say Nepal’s own ‘Enhanced NDC’ does not go far enough in mitigating carbon emissions, or adapting to the impact of the climate emergency

The document has been put up for public comment and is subject to revision. Its highlight is that Nepal for the first time mentions ‘net-zero emission’ as a future goal.

But the document does not give a timeline to achieve it, and only says that the country will formulate ‘a long-term low greenhouse gas emission development strategy’ sometime next year.

In the region, Bhutan has already declared itself carbon neutral—meaning its forests absorb more than the CO2 it emits. China, responsible for 28% of total annual carbon emissions, recently pledged peak emission before 2030 and attain net-zero by 2060. President-elect Joe Biden as committed that the US, which contributes 15% of CO2 annually, to zero carbon emissions by 2050, as have Japan, South Korea and the UK.

India, the fourth largest CO2 emitter globally, is lagging but has been investing heavily in solar power, and by setting targets to electrify railways and phasing out diesel and petroleum vehicles by 2030.

Nepali activists say the country’s NDC could have gone much further to set realistic firm pledges, since it is starting from such a low carbon base.

“We could have easily set a target of net-zero by 2050. In fact, we can achieve it by 2030 if we are really committed,” says environmentalist Bhushan Tuladhar. “Our emission is negligible, we are a low-carbon economy and have much cleaner sources of energy like hydroelectricity at our disposal.”

In 2014, a report showed that Nepal’s forest area had doubled in 25 years, and it absorbed half of Nepal’s total emissions from burning fossil fuels. However, another report last year showed that carbon emission was rising faster than vegetation cover, and frequent wildfires were themselves pumping more CO2 into the atmosphere.

Manjeet Dhakal, adviser to the Least Developed Countries support group at the UN Framework Convention on Climate Change (UNFCCC) says: “I’m pretty confident we will achieve net-zero by 2050. But what is important in this discussion is that, while we may be among the smallest emitters, our emissions are increasing and forests are not absorbing CO2 as they used to.” 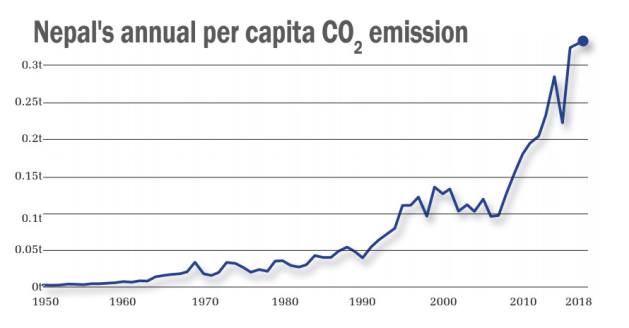 Nepal’s annual per capita carbon emission is one of the lowest in the world at 0.29 tons. In comparison, an average American pumps 16 tons of carbon every year, and Qataris burn 37 tons. However, Nepal’s per capita emission is rising significantly due to the growing import of petroleum products and thermal electricity from India.

As new roads are built and more vehicles imported, Nepal’s main driver of fossil fuel consumption is the transportation sector. Motorcycles account for 80% of all vehicles in Nepal, and phasing them out for battery-powered two-wheelers would significantly reduce petroleum imports.

Electric public transport will need subsidies from the government and investors but it also means utilising Nepal’s clean energy from hydropower and further reducing our carbon footprint. Last fiscal year, Nepal’s petroleum import reached Rs200 billion— 2.2 times higher than the country’s total income from exports. Imports of diesel, petrol, aviation fuel and LPG went down slightly in 2020 due to the pandemic and lockdowns.

Switching to electric public transport and battery vehicles to reduce the petroleum import bill by just 10% would save Rs21 billion a year. This will also clean up the air. Air pollution killed 41,000 people in Nepal last year. This winter that risk for patients with respiratory issues is combined with Covid-19 complications.

Bishwo Nath Oli, Secretary at the Ministry of Forest and Environment agrees. “We plan to produce 15,000MW of clean energy by 2030 and we need a strategy so that it is properly consumed and utilised. Electrification of transport is the best way to go about it, along with electric stoves and biomass to cut emissions significantly.”

Nepal’s Enhanced NDC has set a target of turning 25% of all private passenger vehicles sales, including two-wheelers, to electric. It also aims to make 20% of all four-wheel public transport battery-powered by 2025. Most of Nepal’s three-wheel vehicles are already electric.

Planners hope to increase these numbers to 90% and 60% by 2030. Similarly, in 10 years Nepal aims to develop 200km of electric rail network.

But activists are sceptical. Prime Minister KP Oli had declared in 2018 that 25% of all vehicles in Nepal would be electric by 2020. However, Finance Minister Yubaraj Khatiwada scrapped tax subsidies for electric vehicles in this year’s budget, although his successor has restored some rebate for smaller battery-powered cars.

But even if these targets are met, they are too conservative, says Bhushan Tuladhar. “Our targets are often too ambitious or too relaxed. With the new NDCs, we can see this pattern in sectors such as industry, waste and agriculture which are either too vague or too conservative,” he adds.

Planners have also not taken into account that the cost of electric vehicles is already at par with diesel vehicles of the same capacity, and will decline further as the price of lithium-ion batteries continues to fall. Increased affluence means more people will opt for two-wheelers and automobiles, most likely electric, especially as India and China phase out production of diesel and petrol vehicles.

While Nepal’s voluntary commitment sets a target to reduce coal consumption and air pollution from brick and cement industries by 2030, it does not mention how, and by how much. The NDC document only says the government will ‘formulate guidelines and establish mechanisms’ by 2025 to monitor emissions from large industries.

On the waste sector, the NDC says that by 2025, 380 million litres/day of wastewater will be treated before discharge to natural courses, and 60,000 cubic meters/year of faecal sludge will be managed. But it has targeted only 100 of Nepal’s 753 municipalities for waste segregation, recycling and waste-to-energy programs by 2030.

Nepal’s 2016 NDC pledged to increase forest cover to 40% of the total area, and here the country exceeded the target and current forest cover stands at 44.74%. The new NDC has included more community forests, and says 60% of Nepal’s area will be forest, pledging to stop deforestation of the Chure range.

Similarly, intercropping, agroforestry, conservation tillage and climate-smart agricultural technologies are all mentioned in the NDC, but missing conspicuously from the discussion is farm mechanisation.

Nepal aims to increase hydroelectricity generation  rom the current 1,400MW to 15,000 by 2030. Of this, 5,000MW is an unconditional target, and the remainder is contingent on funding from the international community. In fact, Nepal will need $25 billion to meet its NDC targets, and most of this will be dependent on foreign aid.

Manjeet Dhakal admits the targets in the new NDC may not be ambitious, but he says they are realistic. He adds: “For the longest time Nepal was the most vulnerable to climate change. But time has come for us to show our leadership and commitment to net-zero by implementing the targets set.”