TUNIS, Nov 14 2011 (IPS) - Tunisian women poured into the streets armed with the vote, their latest weapon, when the country voted in its first democratic election since a popular uprising unseated former president Zine Abidine Ben Ali, ending his 27-year- long stronghold on the country. 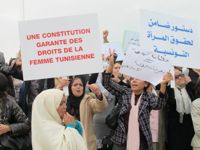 Women protest in Tunis to demand protection of their rights. Credit: Giuliana Sgrena/IPS.

However, the moderate Islamist Ennahda Party’s landslide victory in the vote Oct. 23 has been a cause of grave concern for a broad spectrum of Tunisian women, who feel that ground gained during their bitter struggle for liberation will be stolen from under their feet by the rise of a religious leadership in the post- revolutionary period.

Fears stoked by the recent attacks by ultraconservative groups known as Salafists on movie theatres and TV stations playing films by women filmmakers have been exacerbated by aggression against teachers and students in universities across the country.

Ennahda has gone out of its way to distance itself from the actions of extremists, issuing repeated assurances to the public that their party walks a much more moderate line.

“We will respect the Tunisian people’s way of life and act to preserve women’s rights,” Souad Abdelrahim, an elected member of Ennahda’s constituent assembly told IPS.

Abdelrahim, the only one of Ennahda’s 42 elected female representatives to not wear a veil, has become the virtual poster child for Ennahda’s ‘moderate’ image and its supposed acceptance and tolerance of all women, regardless of religion or dress.

However, Ennahda’s more conservative elements, as well as radical Salafists who refused to vote in the election, are angered by the watered down approach and are calling loudly on Ennahda to take a much more hard-line religious stand.

Last week many dozens of women, including teachers, students and activists, congregated outside the Cité des Sciences, a university in Ariana, Tunis, to call attention to the physical and verbal attacks being launched against women by new conservative actors in various social spaces.

Along the walls of the Cité des Sciences, just in front of a mosque, a group of bearded Salafists screamed at women passing by: “Dégage, dégage”. Literally translated the expression means, “Go away” and was used as a slogan during the revolution against Ben Ali to signify citizens’ outrage with the regime.

Most of the time, these verbal slurs are hurled at women whose clothing defies the conservative dress code expected of women in many Islamic countries.

Not a single party or organisation has issued a formal statement condemning the aggression, forcing women to revert to social media, a widely employed strategy during the revolution, as a means of drumming up support and calling for protests.

Interestingly, the call for a major demonstration in front of the Government palace in Al Kasbah was put forward not by prominent bloggers or activists but by ordinary women who claim they are not affiliated with any one party or ideology.

The call was answered by scores of women, both religious and secular, some supporters of Ennahda and others unaffiliated to politics, all of whom are determined to cement their new-found rights in the country’s fresh constitution.

“I am a professor of Islamic history at the University and if, during my lesson, I say something that doesn’t correspond to conservative Islamist thinking, I know I will be in real danger,” Latifa Bekky, a member of the militant Tunisian Association of Democratic Women, which goes by its French acronym ATFD, told IPS. The organisation is one of just a handful that is actively seeking to safeguard women’s human rights in the new Tunisia.

Several other women’s associations are suspicious about the group, which is said to have ties to Ben Ali’s Constitutional Democratic Rally (RCD) party.

Secular feminists caught in the middle are doing their best to maintain calm during this transitional moment, which is a critical point for Tunisia’s future.

“As a secular feminist and progressive, Ennahda is automatically my political antagonist,” Sana Ben Achour, former president of the ATFD told IPS. “Ennahda’s leadership claims it will respect Tunisian women’s rights but these promises can only be verified by their actions,” she added.

“Many of the women engaged in political activity have faced serious threats via the Internet,” Souad Rejeb, a psychologist and ATFD activist, told IPS. “(Sana) Ben Achour’s image in a facebook post was cancelled with a cross, a symbol that represents a death threat.”

Though women may have harboured fears before the election, none wanted to sacrifice their newly acquired right to vote by boycotting the polls.

“We wanted to safeguard our right to vote freely for the time in our lives – we did observe some irregularities, but not enough to deter us from voting altogether,” said Samira Hizaoui, an electoral candidate for a new workers’ party created recently by the General Union of Tunisian Workers (UGTT), which is also calling insistently for women’s equality.

Most of these women are very courageous and are prepared for the long, hard struggle ahead. Salma Beccar, a famous filmmaker, who is also a representative of the Modernist Democratic Pole (MDP), is one of them.

“I am not afraid of Ennahda – most of their success is due to an effective propaganda campaign supported by satellite TV stations like Al Jazeera. Without this support, the Islamists would not have enjoyed a landslide victory,” she told IPS.

“They have promised to preserve Tunisia’s family code (the most progressive ‘family law’ in the Arab world) but they have already started to talk about adoption laws going against Islamic law,” Beccar told IPS.

“Rumours are also circulating on Facebook about the party’s intention to segregate schools, buses and other public areas based on gender. We need to be aware of these changes and be ready to resist,” she added.

“Although in the beginning Ennahda is showing its ‘moderate’ face, I have my doubt that Islamists are capable of being moderate in the long run,” Chakras Balhaj Yahya, a UGTT trade unionist told IPS.

“My six sisters chose to wear the veil, which I don’t understand. I still walk around in my miniskirt but now people look at me differently,” she added.

Wissal Kassraoui, a young journalist at Shams Radio, who also wears Western clothes, confessed that she is afraid about what could happen in the next few years, or even months.

“They (the moderates) will wait, perhaps one year, perhaps less, to show their true face; but the fact is, their base has already started threatening women,” she stressed.