Dec 3 2017 - Scene 1: As a visiting tourist goes through the aero bridge outside the flight gate into the Bandaranaike International Airport lobby, walking past airport officials and smartly-clad SriLankan Airlines’ ground staff, the mood is anything but welcoming. They are greeted by glum or stern faces. 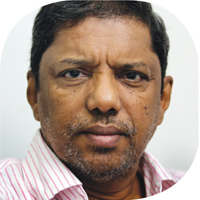 As the visitor approaches the immigration counter, the officer looks at you warily as if to say, “Why are you here? Do you have a proper visa?” No smiles, no warm welcome. Across the airport, apart from an exceptional official, staff is generally unfriendly.

Scene 2: Last week, bringing my car to a halt at a pedestrian crossing on Galle Road near McDonalds, Kollupitiya, when the lights had turned red, I was intrigued by a young Sri Lankan who was waiting to cross the road. He was engrossed in a conversation with an elderly, respectably-dressed woman who appeared to be begging. He suddenly realised that traffic had stopped and the green indicator to cross had come on. Quickly dipping into his pocket and fishing out a note, he gave it to the woman, gently tapping her on the shoulder in a gesture of “I understand or empathise with your plight” and ran across the road. I quickly tooted the horn, causing him to turn around quickly as he rushed across and gave him a ‘thumbs up’ to acknowledge his good gesture. Surprised at first, he then returned the smile.

While the second case exemplifies the natural Sri Lankan trait – being a generous, warm and friendly nation of people, the first case gives a wrong notion of Sri Lanka being an unwelcome place for visitors – when in fact all channels should be switched on to greet visitors with a pleasant smile.

And in the month of December where there is a lot of goodwill, sharing and pleasantry, public and private sector organisations involved in tourism should begin a crash course on making Sri Lanka a more welcome place for the four million-plus visitors the country hopes to welcome by 2020.

Sri Lankans have a good heart, a warm smile and are generous to a point – as depicted in the example above. So how can the country benefit from an ‘asset’ that comes naturally (and at no cost) particularly in making tourists welcome at the first point of contact – the airport?

First impressions matter to any visitor and this is where the authorities and private sector institutions engaged in tourism have failed over the years, focusing more on the hardware than the software. Large billboards greet visitors with a woman, palms pressed together, smiling brightly. But below the poster, an official or ground steward would often have an indifferent, bored or even sullen look. There is no warm and friendly atmosphere at the airport, particularly at the unfriendly immigration counters.

With tourism taking precedence in the country’s growth model through increasing foreign exchange revenue, more employment and more benefits trickling down to community level, this year’s budget provided a lot of benefits to this sector.

All the good vibes in the ‘hardware’ context are there: Para-tariffs removed off some imported food and beverages; home-stays encouraged with a credit facility which has been budgeted at Rs. 10 million (though this would be just enough for 10 or fewer homes @ the rate of Rs. 1 million for renovation); rationalising liquor licences; developing ancient forts as tourist attractions; enhancing the value of railway stations like Nanu Oya, Colombo Fort, Galle and Ella by declaration as archaeological sites; developing domestic airports; and holding three street festivals and exhibitions in Los Angeles, London and Mumbai during the coming year to coincide with Sri Lanka’s 70th Independence celebration (the trade says the Rs. 50 million allocated is peanuts compared to the cost of an event in those countries). However, let’s leave those negatives for another day.

In the area of ‘software’ which is the focus of today’s discussion, the authorities deserve praise in introducing a tourist-friendly ‘tuk tuk’ where the drivers will be provided free training as tourist guides.

As I type on the desktop – one finger at a time, the old ways of using a typewriter or computer keyboard for an untrained person — the morning’s silence is broken by Kussi Amma Sera’s voice at the gate, reprimanding a young beggar, “Aei kollo, umbatawedak karanna bari de, hinga kanne nethuwa?” However, despite her severe tones and scoldings, she takes out a couple of 10-rupee coins from a hembiliya hidden, under her hette and within her buxom bosom, gives it to the man and sends him away. Generosity seems to be over-spilling this Friday morning, the first day of December despite the gloomy overcast skies, continuous rains, gusty winds and personal tragedies. December, in fact, is the month of greetings, giving, sharing of gifts and, for the high rollers, partying notwithstanding the political chaos in the city with the rumblings of thunder not in the skies but electioneering during the upcoming local government elections.

State authorities dealing with tourism must combine with the privately-led tourism industry to provide a warmer welcome to every foreign guest arriving in the country (and even on departure). It should be the kind of warmth to some extent seen at the Colombo Port where Kandyan dancers and drummers greet visitors arriving on any cruise ship.

If the tourism authorities can come up with a model where every guest arriving at the airport is greeted with a flower and a smile, with the immigration counters manned by a smiling officer, a small ‘welcome’ notice and a bowl containing fresh flowers or sweets, that would go a long way in enhancing the Sri Lankan product. This is in addition to ensuring tourists not getting harassed like the case of a British national, a Buddhist herself, who was deported for sporting a Buddha tattoo on the upper arm but later awarded compensation by the Supreme Court upholding that her fundamental rights had been affected.

Being an island nation helps. Many island states have pitched their tourism product on the warmth of the country, its people, food and music. The latter two make a world of a difference to the traveller.

For instance, during the three-month closure of the airport earlier this year, there was a calypso band playing at the departure lounge which was a welcome diversion and helped passengers while away the long hours in the departure lounge. Selfies were taken, children ran around and long hours quickly went past as visitors absorbed the island’s culture of music and song. Given that success, this should have been continued. It is still not too late to re-introduce this, both in the arrival and departure lounges.

If one is to play on the psyche of a traveller, first and last impressions matter more than hardware (nice hotels, good food, visiting important sites). They create an everlasting impression of a country that is warm, friendly and welcoming to visitors.

Visiting Hawaii some years back, all that I can remember is the greeting at the airport: A smiling young woman garlanding every visitor, with Hawaiian music from a typical ukulele in the background. That was more than 30 years ago and that warm welcome will always remain as the high point of a brief visit.

As an island nation, Sri Lanka is at an advantage over its regional peers in sharing the tourism pie. Islanders are often considered fun-loving, easy-going and laid-back, and lovers of music – and as the pithy Sri Lanka saying goes “Neva gilunath ban choon” (Even while the ship is sinking the people are partying). Come sun or rain, Sri Lankans – most of the time – are happy islanders. And, a tot of toddy with a little ‘bite’ enhances the mood!