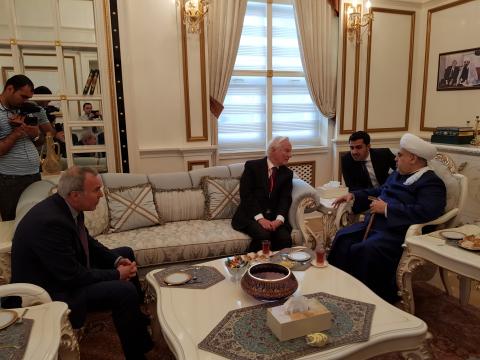 BAKU, AZERBAIJAN, May 3 2019 - (Geneva Centre) – The Head of the Religious Community in Azerbaijan His Virtue Shaikh-ul Islam Allahshukur Pashazadeh invited the Executive Director of the Geneva Centre for Human Rights Advancement and Global Dialogue Ambassador Idriss Jazairy to a private audience in his residence in Baku.

During the visit, His Virtue Pashazadeh expressed his appreciation to the endeavours of the Geneva Centre to promote mutual understanding and cooperative relations between people and societies through the holding of the 25 June 2018 World Conference on religions and equal citizenship rights that received strong support from the Secretary General of the United Nations Antonio Guterres.

His Virtue Pashazadeh and Ambassador Jazairy agreed that the Caucasus Muslims Board and the Geneva Centre are united by their vision to promote equal citizenship rights in multi-cultural and multi-religious societies worldwide.

In light of this discussion, the participants highlighted the need to capitalize on the momentum of the World Conference, the Joint Document on Human Fraternity for World Peace and Living Together signed on 4 February 2019 by HH Pope Francis and the Grand Imam of Al Azhar Ahmad Al-Tayib in Abu Dhabi, United Arab Emirates, as well as the Fifth World Forum on Intercultural Dialogue held in Baku to examine inventive ways to carry the process forward to harness the collective energy of religions in the pursuit of equal citizenship rights.

His Virtue Pashazadeh invited the Executive Director of the Geneva Centre to co-organize the 19 June 2019 conference on “From the Inter-faith, inter-civilizational cooperation to human solidarity” to be organized together with the King Abdullah bin Abdulaziz International Centre for Interreligious and Intercultural Dialogue in Vienna, Austria.

The meeting was concluded by an official dinner that was attended by high-level government officials including the Minister of Culture of the Republic of Azerbaijan Abulfas Garayev.