GENEVA, Jul 17 2019 - A new publication entitled “Improving access to justice for workers: The case of the UAE” has been published by the Geneva Centre for Human Rights Advancement and Global Dialogue. The publication is an outcome of a panel discussion held on 20 March 2018 at Palais des Nations in Geneva addressing the same subject. The debate was jointly organized by the Geneva Centre, the European Public Law Organization (EPLO) and the Permanent Mission of the United Arab Emirates to the United Nations Office in Geneva (UNOG). 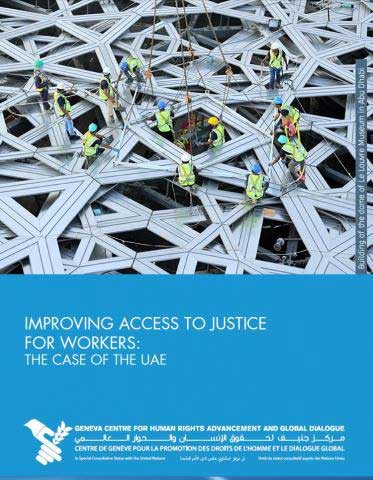 The aim of the publication is to review the progress achieved in the UAE to enhance access to justice for workers and to identify areas of possible improvement. The review was intended to assess the most innovative features of labour reforms and their possible replication in Gulf Cooperation Council (GCC) countries. UAE was chosen as a case study for this review in view of the fact that the country has the highest proportion of international migrants in the world and that the country has recently implemented numerous innovative measures to enhance access to justice for migrant workers.

The first part of the publication summarizes the panel proceedings of the statements provided by labour migration specialists. During the debate, it was highlighted that migrant workers bring a substantial contribution to the host economy, as the UAE is dependent on access to labour to maintain economic growth and development, since domestic labour supply is insufficient to meet national demand. The speakers also offered constructive recommendations to the UAE regarding the adoption of policies and measures aimed at ameliorating access to justice for foreign workers.

The second part of the publication includes an intellectual think piece on the process of reform, which has been initiated in the UAE with respect to foreign labour. In this connection, it was argued that the UAE has made remarkable efforts to improve the overall labour conditions of foreign labour and to enhance legal avenues to settle labour-related disputes. For instance, the UAE government has established a mobile court system, the first of its kind worldwide, to address lawsuits related to labour laws and to provide legal services. In 2017, the UAE created a One-Day Court System to settle labour disputes for litigation claims amounting to up to USD 5,500. These initiatives are telling examples of recent action taken by UAE authorities to enhance access to justice for workers.

The Geneva Centre aims to carry out a similar evaluation process of internal labour legislation to enhance access to justice for foreign workers in other countries of the GCC experiencing large-scale migration.

Interested Permanent Missions accredited to UN in Geneva and other stakeholders are invited to pick-up copies of this brochure, which is at their disposal at the premises of the Geneva Centre, located at: