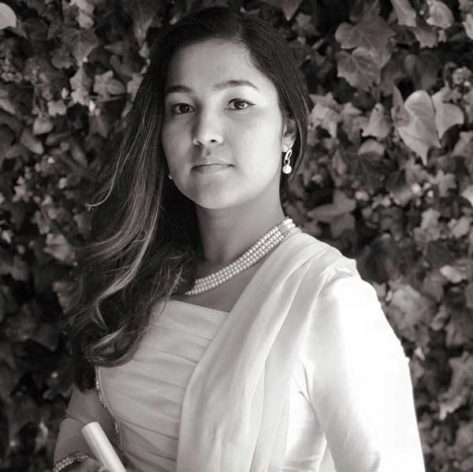 NEW DELHI, India, Nov 23 2020 (IPS) - Instead of being cowed by her seven-year imprisonment, Wai Wai Nu, emerged stronger and more determined to fight for the rights of all people, including the Rohingya in her native Myanmar.

In an exclusive interview with IPS, Wai Wai says her prison experience made her all the more aware of the need for human rights activism. What kept her going during her prison years was the desire to help other women inmates to ‘have a dream’.

“I feel I was privileged when I compare myself to the other young girls and women that I interacted with while I was in prison,” Wai Wai says.

“Most of them were unaware of how corrupt the political system was. I had a dream, a vision, whether or not I could achieve it because of my imprisonment was secondary. I felt I could help them have a dream.”

The youngest of three siblings, Wai Wai (33), spent seven years as a political prisoner with her family. Imprisoned at only 18, she was forced to give up her education, her everyday life. Still, she came out of prison undeterred and today is an inspiration to many women and activists fighting for human rights and dignity of their communities and beyond.

Her family is Rohingya, a Muslim minority in Myanmar which has been facing continued persecution and marginalisation by state and non-state actors alike.

It was her father’s activism that led to her imprisonment. Her father, who was elected to parliament in 1990, received a 47-year prison sentence, which was politically motivated. The family was released in 2012.

Wai Wai has received many awards for her activism including the N-Peace award in 2014. She was named as one of the Top 100 women by BBC the same year and the Time magazine named her one of the Next Generation Leaders in 2017.

However, she considers her most outstanding achievement to be the ability to emerge as a woman leader from her community and inspire many like her to be changemakers.

“I started my activism when I was 25-years-old. Apart from the many challenges, I was faced with patriarchy from within my community initially as there were close no women in leadership roles. Now I see an acceptance from the same community, and I am proud to have been able to break this stereotype”.

An achievement that Wai Wai sees as imperative though not tangible is being able to bridge the gap between the Rohingya in Myanmar, who are extremely marginalised and isolated from mainstream Myanmar, and the rest of Myanmar and society at large.

“I speak Burmese fluently, I grew up in the city, and I think, through my activism, I have been able to break the stereotypes created in part by the media and address the Islamophobia around my community, which is seen by so many as alien,” Wai Wai says.

“We (Rohingya) have played an important role in Burmese history, in its independence, and I want to remind the world of this too. Today a lot of young people see me as someone who did not give up and tell me how my story inspires them to continue to achieve. I value this more than any achievement or award that I have ever received.”

Wai Wai recalls that she realised she needed to help women prisoners because of the stigma they faced during and after their incarceration.

She says she needed to help these women because they suffered a double burden: they faced the direct consequences of being imprisoned, and beyond the prison walls, their suffering continued.

Once they had finished serving their prison time, most were not accepted back into their families, those married were abandoned by their husbands and had to start their lives all over again.

The fact that most came from impoverished economic backgrounds only worsened their situation.

She says her father continues to fight for human rights and draws inspiration from religion despite suffering and facing the consequences of his activism, Wai Wai says he feels “he has the duty towards helping those who need support.” He told her that he would have to face Allah when he dies and wants to walk on the path of justice “I draw inspiration from his strength and beliefs in justice and equality,” she says.

Wai Wai has been an open advocate for democracy and human rights for all.

While referring to Myanmar’s transition to democracy, she says that it concerns her that the world celebrates a flawed democracy like Myanmar for its own geopolitical or economic gains. Here millions of people still live in a Genocide-like situation, and the effect is to legitimise a flawed democracy and help prolong atrocities and crimes against the most marginalised in the country.

“When we talk of democracy, we need to ensure that human rights of all are protected, that there is political participation by all, freedom of expression and assembly are upheld,” Wai Wai says.

“When a state has marginalised an entire community and made them outsiders … Where the military has used this transition to democracy as a means to maintain its power: To accept and celebrate this as a successful transition to democracy is like rewarding a State that has not even met the benchmark of basic democratic criterion.”

Of the many challenges that Wai Wai has faced, one that she has to continue to fight is that of others stereotyping her and manipulating her into limiting her work and her activism.

‘There are many who only want me to talk about the human rights of my community and want to limit my ability to contribute to other issues. Yes, I have the responsibility towards my community and my people, but that does not stop me from advocating for universal principles like democracy, empowerment of youth and justice and peace in society.”

Wai Wai Nu is the founder and director of Women’s Peace Network and is currently serving as a fellow at the centre for the prevention of Genocide, US Holocaust Museum.